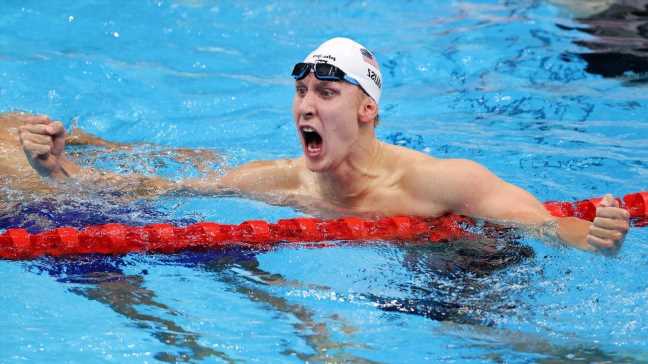 Tonight at the Olympic Games, Simone Biles and the U.S. gymnastics team will compete for the first time (at 2:10 a.m. ET!) in a long night of gymnastics qualifications that starts at 9 p.m. ET.

Also tonight, Nyjah Huston could win the first Olympic gold medal in skateboarding. Already, two-time Olympic medalist April Ross and her new partner Alix Klineman won their first match in beach volleyball and the United States broke its one-day medal drought with a gold and a silver in the 400-meter individual medley. (Here’s the lowdown on the Team USA athletes to watch there.)

We’ve got you covered with live updates throughout:

Chase Kalisz took one step up the podium from his silver-medal Olympic finish in 2016, winning gold in the 400M individual medley with a time of 4:09.42. His dominating performance was the first overall medal for the United States in these Oympic games, but only by fractions of a second. Teammate Jay Litherland took the silver in the event as well.

Later in the pool, Kieran Smith earned a bronze medal for Team USA in the 400M freestyle.

Australia set the world record in the women’s 4x100M (3:29.69), but the Americans added another medal with a bronze medal in the event.

Skateboarding at the games

Skateboarding made its Olympic debut in Tokyo and Team USA’s Nyjah Huston was the favorite heading into the finals.

Teammates Alix Klineman and April Ross — nicknamed the A-Team — started off right with a Pool B beach volleyball win over China’s Wang Xinxin and Xue Chen, 21-17, 21-19. Ross is in her third Olympics after pairing with Jennifer Kessy in 2012 and winning silver before winning bronze with Kerri Walsh Jennings in 2016. She’s seeking to join Jennings and Misty May-Treanor as the only players to win at least three medals in women’s beach volleyball. For Klineman it was her first Olympic experience. “I was a little nervous but really excited for this match,” she said.

The United States men’s gymnastics team advanced to the team final with a fourth-place finish in qualifications.