Ask Archie Thompson not just whether he would like to play in the current Melbourne Victory team, but whether he thinks he would be an automatic starter, and the eyes widen and his grin gets even bigger.

''Come on, mate … you don't have to ask, do you? I would love to play in that team. Yes, I would get a spot … I am going to sound a bighead, but I will say it,'' declared the Victory legend on Tuesday, realising after a moment that the inquiry was somewhat tongue in cheek. 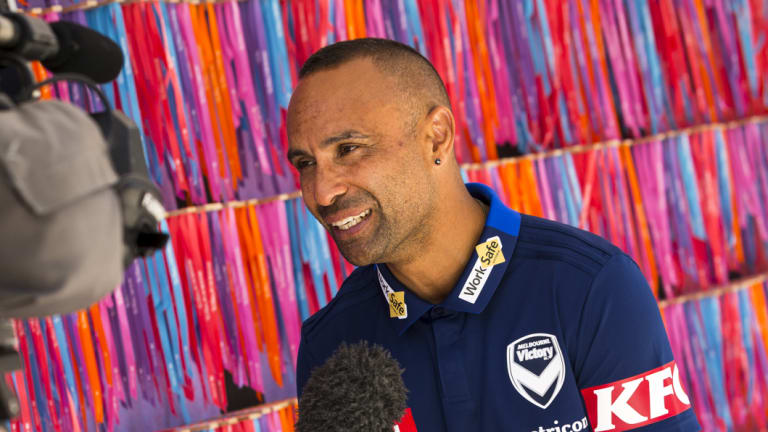 ''They are great to watch,'' he said of the team that has now won its last five games on the spin, aided and abetted by the wiles, guile and class of Swedish international Ola Toivonen and Japanese superstar Keisuke Honda.

''It's the type of football I love to play and watch. They are exciting. They have players who play the ball when they see it.

''Victory are phenomenal. They have definitely got the strongest squad, stronger players so of course I would have loved to have played in that team.

''When you look at the quality … Honda, he keeps it so simple, I love it. He will see a run, he will play it.

''Toivonen, he's a clever player, he's great on the ball. He's a completely different type of striker to what Victory has had in the last few years.

''Terry Antonis has really improved, that's about keeping your body right, keeping fit. He's a good shout for the Asian Cup squad. I would like to see Thomas Deng there too, a beautiful story and he's already made the Socceroos.''

With a decision due to be made on A-League expansion, Thompson is adamant that it should happen sooner rather than later even if the current clubs are concerned that bidders for new licences might not be ready in time for kick-off next season.

''Last year was probably the flattest I have ever seen the league, and quality wise. Quality wise it was terrible.

''This year you have some great individuals, some world class players who are still in their prime. We have sorted out all our issues or we hope we have. Let's roll it, we have got nothing to lose.

''I would love to see another Melbourne team

''It definitely needs one, there's big growth out west, there's growth out east. I think the west bid wants to have its own identity in their own stadium. I would like to see it out west, but I don't care where it is.''