Everett Teaford remembers the curious gaze from the executive across the room. Teaford, a former major league pitcher, had joined the Houston Astros as a professional scout in early 2016, and at an organizational meeting, his new colleague Sig Mejdal kept shooting him a look.

When the group adjourned, Mejdal, then a top Astros executive, approached Teaford and explained his interest. A decade earlier, when Mejdal was an analyst with the St. Louis Cardinals, his pre-draft statistical model had offered a bullish projection on Teaford’s professional future. Teaford, then a Georgia Southern left-hander, had a sparkling statistical résumé — he’d had a 5-1 record and 1.84 earned run average the previous summer in the prestigious Cape Cod League — that belied his slight stature.

Teaford stands 6 feet tall, but he was scrawny for a pro prospect, weighing 160 pounds “on my heaviest day,” he recalled. As Mejdal recounted the back story to Teaford, he explained, “Well, one of the biggest problems was that the cross-checker thought you worked on the grounds crew,” referring to the region’s supervising scout who saw Teaford raking the mound without his uniform on.

Baseball is littered with examples of varying body types — Astros second baseman Jose Altuve, who is 5-foot-6, and Yankees outfielder Aaron Judge, who is 6-7, finished 1-2 in the 2017 American League Most Valuable Player Award voting — but cognitive bias can cloud judgment, too. In Teaford’s case, the scouting evaluation was predisposed to a mental shortcut called the representativeness heuristic, which was first defined by the psychologists Daniel Kahneman and Amos Tversky. In such cases, an assessment is heavily influenced by what is believed to be the standard or the ideal.

“When we look at the players standing for the national anthem, it’s hard not to realize that quite a few of these guys are far from stereotypical or prototypical,” Mejdal said. “Yet our mind still is attracted quite loudly to the stereotypical and prototypical.”

Kahneman, a professor emeritus at Princeton University and a winner of the Nobel Prize in economics in 2002, later wrote “Thinking, Fast and Slow,” a book that has become essential among many of baseball’s front offices and coaching staffs.

There aren’t many explicit references to baseball in “Thinking, Fast and Slow,” yet many executives swear by it. It has circulated heavily in the front offices of the Oakland Athletics, the Los Angeles Dodgers, the Baltimore Orioles and the Astros, among others. But there is no more ardent a disciple of the tome than Mejdal, a former biomathematician at NASA who earned Master’s degrees in both cognitive psychology and operations research. 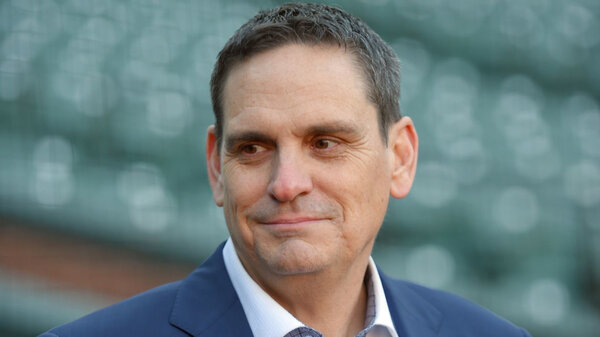 “Pretty much wherever I go, I’m bothering people, ‘Have you read this?’” said Mejdal, now an assistant general manager with the Baltimore Orioles. “From coaches to front office people, some get back to me and say this has changed their life. They never look at decisions the same way. But others have said, ‘Sig, thanks, but please don’t recommend another book to me.’”

A few, though, swear by it. Andrew Friedman, the president of baseball operations for the Dodgers, recently cited the book as having “a real profound impact,” and said he reflects back on it when evaluating organizational processes. Keith Law, a former executive for the Toronto Blue Jays, wrote the book “Inside Game” — an examination of bias and decision-making in baseball — that was inspired by “Thinking, Fast and Slow.” Law said he found it through a suggestion by Mejdal.

John Mozeliak, the president of baseball operations for the St. Louis Cardinals, sees the book as illustrative.

“As the decision tree in baseball has changed over time, this helps all of us better understand why it needed to change,” Mozeliak wrote in an email. He said that was especially true when “working in a business that many decisions are based on what see, what we remember, and what is intuitive to our thinking.”

Sam Fuld, the new Philadelphia Phillies general manager, said reading “Thinking, Fast and Slow” was a good reminder to be aware of one’s own basic human flaws. He plans to start a front office book club in Philadelphia that could feature Kahneman’s work, as well as titles by Adam Grant, Carol Dweck and others.

Teaford, who proved his doubters wrong by making the majors after being a 12th-round pick, is now the pitching coordinator for the Chicago White Sox. He recommends that his coaches read Kahneman’s book even though he was initially skeptical of Mejdal’s suggestion, saying, “Can a guy who didn’t totally graduate from Georgia Southern comprehend this book that Mr. NASA was talking about?”

The central thesis of Kahneman’s book is the interplay between each mind’s System 1 and System 2, which he described as a “psychodrama with two characters.” System 1 is a person’s instinctual response — one that can be enhanced by expertise but is automatic and rapid. It seeks coherence and will apply relevant memories to explain events. System 2, meanwhile, is invoked for more complex, thoughtful reasoning — it is characterized by slower, more rational analysis but is prone to laziness and fatigue.

During his time as a college coach, Joe Haumacher, a minor-league pitching coach for the Orioles, used to have a policy that he wouldn’t meet with a player until he could offer his undivided attention. He wondered if that was fair, but reading “Thinking, Fast and Slow” helped Haumacher understand his rationale.

Kahneman wrote that, when System 2 is overloaded, System 1 could make an impulse decision, often at the expense of self-control. In one experiment, subjects were asked to complete a task requiring cognitive effort — remembering a seven-digit number — and then were given a choice of chocolate cake or fruit salad for dessert. The majority opted for the cake.

“I don’t want to get into a situation where my mind is halfway on one topic, and then I’m talking to a player and I give him the chocolate cake answer that he may be looking for, versus the fruit salad answer that he probably needs,” Haumacher said.

No area of baseball is more susceptible to bias than scouting, in which organizations aggregate information from disparate sources: statistical models, subjective evaluations, characterizations of mental makeup and more. Kahneman emphasized the importance of maintaining independence of judgments to decorrelate errors — that is, to separate inputs so that one doesn’t influence another.

“The independent opinion aspect is critical to avoid the groupthink and be aware of momentum,” said Josh Byrnes, a senior vice president for the Dodgers. “There’s some purity for how the information is collected and then, ultimately, how it’s weighed.”

Matt Blood, the director of player development for the Orioles, first read “Thinking, Fast and Slow” as a Cardinals area scout nine years ago and said that he still consults it regularly. He collaborated with a Cardinals analyst to develop his own scouting algorithm as a tripwire to mitigate bias. He also urges caution on the common practice of issuing “comps” — scouting lingo for comparisons — of a young player to an established pro.

“We have this tendency to comp a player to what we’ve seen in the past, or to a player that’s in the major leagues, and then all of a sudden, everything about that amateur player starts to look and feel like that major league player,” Blood said. “And that’s dangerous.”

Mejdal himself fell victim to the trap of the representativeness heuristic when he started with the Cardinals in 2005. His first draft model projected Stanford’s Jed Lowrie as the top available player. Mejdal lived nearby and went to go see this “imagined Paul Bunyan of a second baseman,” he recalled, only to find a player who seemed too small even for a college field.

Mejdal had just quit a job at NASA and was doubting his analysis, triggering a panic attack in the Stanford grandstand. “I remember that Kahneman-described disconnect,” he said, adding that it took a few hours to identify his mental misstep, remembering Lowrie’s size didn’t change the fact that he won the Pac-10 Conference triple crown as a sophomore.

But for all the interest in it from people in baseball, the book contains only one notable reference to the sport: a paragraph explaining the premise of Michael Lewis’s best seller, “Moneyball.”

Lewis later wrote “The Undoing Project,” about the work of Kahneman and Tversky (who died in 1996) as a direct result of a “Moneyball” book review in which two academics noted that the market inefficiencies in baseball could be explained by the cognitive psychology research of the two psychologists. Lewis later wrote in Vanity Fair, “It didn’t take me long to figure out that, in a not so roundabout way, Kahneman and Tversky had made my baseball story possible.”

Kahneman, now 86, declined an interview for this article. He said he didn’t know enough about baseball. Baseball, however, knows a lot about him.