When Alyssa Nakken in July became the first woman in major league history to coach on the field, it was big news in the baseball world. But it was a particularly extraordinary development in one small corner of the industry: a text message group featuring dozens of women working in professional baseball.

Several members said they were overjoyed at Nakken’s achievement. Others said they planned to buy her No. 92 San Francisco Giants jersey. When someone shared an illustration of Nakken breaking down a brick wall encircling a baseball field, it quickly became the group’s photo on WhatsApp.

“You can share this moment with somebody else, but maybe they don’t understand the importance of it,” said Andrea Nuñez, 27, a minor league strength and conditioning coach with the Los Angeles Angels. “To be able to have the women in that group to share excitement with was so awesome.”

This “Women in Baseball” text chain, though, is more than simply a place to celebrate promotions. For the 49 women involved — all of whom work full time in professional baseball — it is a rare space for support, brainstorming and understanding.

They discuss their experiences in a male-dominant industry known more for its tradition than its progressivism. They talk about the discrimination they have faced. They trade ideas on player development or management. They chat about improving the diversity within the sport. They check in on one another.

“I have a group family chat with my parents, my brothers and my sisters-in-law, and after a hard day or a really good day, it’s really fun to text them,” Nakken, 30, said. “This is like another type of family that I feel like, if there’s something going on, I can share it with them and they’ll get it. They just get it.” 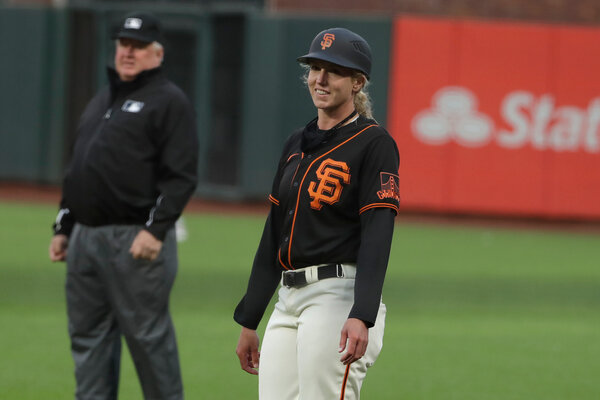 The text chain is the brainchild of Jen Wolf, 33, a life skills coordinator in the Cleveland Indians’ farm system. Sensing a void in support groups for women in baseball when she was in between jobs, Wolf started the text chain in the summer of 2019 with fewer than 10 people. The earliest members invited other women, who invited others, and the group now includes scouts, major and minor league coaches, education coordinators, media relations staffers and more.

“Being able to mentor other women that are coming into the game is huge,” Wolf said. “I didn’t have that. I had mentors, but not really female mentors.”

That is little surprise considering baseball has long been an industry controlled by men. But women are increasingly becoming a presence in the sport.

Forty percent of the professional employees at Major League Baseball’s central office are women (the highest percentage since 2008), and 21 women had on-field coaching or player development roles for organizations entering 2020 (up from just three in 2017), according to the Institute for Diversity and Ethics in Sport at the University of Central Florida.

Still, that institute’s latest report card gave M.L.B. and its 30 teams a C grade for gender hiring. A look at the gender breakdown at the club vice president-level jobs shows why: Of roughly 500 vice president jobs among the 30 clubs, 95 were held by women, according to the report. And a woman has yet to break through as an M.L.B. player, manager or general manager.

‘I had no clue there were so many women’

It was that lack of midlevel opportunities, in part, that led Wolf to start the WhatsApp group.

In 2018, she left her job as the coordinator for minor league and international operations for the Mets to look for work elsewhere in the industry. But she found that baseball’s efforts for women were geared more toward entry-level and executive positions. At the annual industrywide winter meetings in December, she said, she could not even attend an M.L.B.-run event for women because she wasn’t employed by a team at the time.

She realized women needed help in this tricky part of their careers — the steppingstones of middle management — not just at the highest or lowest positions.

“Major League Baseball has done a lot to get women and minorities into the game, but there isn’t as much support for those who are already in the game,” she said. “And I had a lot of female friends or colleagues or peers that may have had one bad experience with a club or something and then decided not to work in baseball anymore.”

So after Wolf was hired in February 2019 by the Indians, she started the WhatsApp group for women to talk, vent and assist one another outside the few formal programs that existed.

The group is limited to women who hold full-time jobs in baseball operations. But if someone is furloughed or laid off, a more common occurrence during the pandemic, she said, they are not kicked out of the group.

In fact, Wolf said, every woman added is made an administrator in the WhatsApp group so that she can, in turn, invite more.

“This has all been spread grass-roots and word of mouth,” she said. “So if somebody is not in it, it’s not anything personal. Maybe I don’t have their number.”

The text group includes, among others: two other minor league coaches hired before this season, Rachel Balkovec of the Yankees and Rachel Folden of the Chicago Cubs; Eve Rosenbaum, the Baltimore Orioles’ director of baseball development; Melissa Lambert, the Kansas City Royals’ assistant director of behavioral science; and Karla Espinoza, a scout for the Tampa Bay Rays in Mexico.

Nuñez was invited into the group over the winter by her colleague Andrea La Pointe, a minor league operations assistant for the Angels, and found it eye-opening because she didn’t have such a network before.

“I had no clue there were so many women,” she said. “Obviously there’s not enough, but I didn’t know there were so many in terms of the numbers we have now. The only other female-filled position that I had seen was maybe an athletic trainer.”

Nuñez took part in the group’s gathering in Arizona during spring training and in its Zoom calls during the pandemic shutdown. When she mentioned on a video call that she was interested in pursuing a master’s degree in sports psychology, Wolf connected her to mental skills coaches for advice.

Through the chats, Nuñez said, she also met Carla Bustamante, a longtime executive for the Naranjeros de Hermosillo, a professional team in Mexico, and found it inspirational to learn about other Latinas in professional baseball.

“It’s so amazing to be able to see someone who maybe speaks like you, who might have a little accent like you and who you see yourself in,” said Nuñez, a Mexican-American who was born in El Paso and spent some of her childhood across the border.

The group’s push for diversity is not limited to gender. Nuñez, who is believed to be the first Latina strength and conditioning coach in professional baseball, and Wolf, who speaks Spanish and once worked for M.L.B. in the Dominican Republic, realize that a lot of the women working in baseball are white. Nearly 30 percent of major league players are Latino, with an even greater share in the minors.

“The barrier has opened up for women in the U.S.,” Nuñez said. “Now we’ve got to keep fighting because so many other barriers have to be brought down. I’ve met plenty of Latino coaches on the minor league side, but I haven’t met many Black coaches. I definitely haven’t seen many women of color, so for me, we’re just getting started.”

A watershed moment for the text group, and women in the sport, came a year ago. During a celebration following the Houston Astros clinching a trip to the World Series, Brandon Taubman, the team’s assistant general manager, yelled at a group of female reporters in the clubhouse, “Thank God we got Osuna,” along with an expletive.

Taubman was referring to Roberto Osuna, a relief pitcher acquired by the Astros in 2018 while he was serving a 75-game suspension because of accusations of domestic violence. Three days after a Sports Illustrated article brought the Taubman outburst to light, the Astros fired Taubman. The group text lit up.

“We kind of used it to talk more about what women face in general, instead of that specific incident, so that way nobody who may or may not have been involved felt like they had to talk on that specifically,” said Wolf, who knew some women in the group might have known or worked with Taubman.

Over all, Wolf — echoing the sentiments of Nakken and Nuñez — said her experience working in baseball had been overwhelmingly positive.

“If it wasn’t, I wouldn’t still be here,” she added. “That said, it’s not perfect. It can definitely improve.”

At a basic level, Wolf said, more teams need to be aware of their team work gear (“Making sure you have clothes that fit women and you’re not just giving them men’s stuff,” she said) and facilities, like appropriate bathrooms and locker rooms for women. Wolf had to use an empty umpires’ locker room at the Mets’ minor league facility in Port St. Lucie, Fla., because there wasn’t a dedicated space for women.

The pipeline into the sport, she said, also has room for improvement. To first crack into baseball, Wolf needed a bit of luck: The former Red Sox general manager Lou Gorman was a frequent customer of the bagel shop near Boston where she worked in high school and helped her land her first internship. Recruiting is also key to ensuring front offices, filled with white men from elite universities, aren’t pulling simply from those networks, Wolf added.

She noted that analytics had helped more people without professional playing experience, including women, to find work in baseball. As a result, men have become more used to working with women. But hurdles remain, such as inappropriate overtures at work or patronizing comments or workplace cultures where women feel afraid to speak their minds.

“I have actually, in general, had much better interactions with players, minor league coaches and scouts than I’ve had with my own peers in the front office,” Wolf said.

Finding more role models for women in baseball was part of why Wolf started the text chain. While she said she looks forward to the day that women in baseball are known for their merits, not their gender, Wolf wants girls and young women to hear Nakken’s story and see her in uniform on the field.

“Those women are incredible, but I wish there were more,” Wolf said. “It’s been those same women for a long time. We need more of them.”