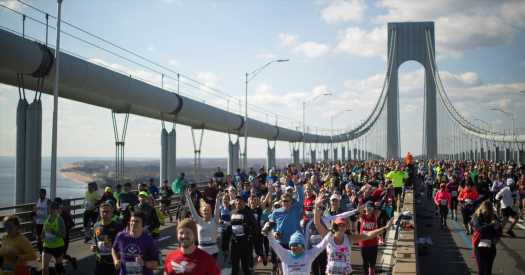 It is a tradition as much a part of the New York City Marathon as the 26.2-mile distance. The singular boom of a cannon — and the start of Frank Sinatra’s “Theme From New York, New York” — sending thousands of runners across the start line and over the Verrazzano-Narrows Bridge.

But that flood of humanity may look a bit different this year.

There will probably be thousands of fewer runners, and it may take them much longer to begin their journey. If there are crowds along the roads, they are likely to be smaller than usual, as organizers do all they can to prevent their race from becoming a coronavirus superspreader event.

“Is the marathon going to happen? Absolutely,” said Ted Metellus, the race director for the New York City Marathon, planned for Nov. 7. “It’s what it is going to look like that’s in question.”

Though Metellus was speaking about the New York race, he could have been describing any of the three major marathons in the United States that are crunched into a four-week window this fall, instead of being spread over seven months.

With the pandemic wiping out major running events for most of 2020 and the first half of this year, race organizers have spent the past few months working with health experts and government officials to plan their return. The process involves trying to predict what the world will look like in seven months, because marathons cannot be planned (or trained for) with a few weeks’ notice.

It is not an easy task, and organizers say that no matter what plans they announce in the coming weeks and months, everything is subject to change.

“Heaven knows what things may intervene between now and the race,” said Tom Grilk, chief executive of the Boston Athletic Association, which conducts the Boston Marathon, scheduled for Oct. 11. “What we’ve learned is that the signal feature of this pandemic is uncertainty.”

While every road race is shrouded in uncertainty right now, plans for the marathons in New York, Boston and Chicago, which is scheduled for Oct. 10, have special significance because they are parts of the World Marathon Majors series. Those races — along with the three major marathons in London, Berlin and Tokyo — offer the most prize money, attract the best marathoners and serve as bucket-list events for runners of all abilities.

The glut of races this fall — the ones in Boston, London and Tokyo usually take place in March and April — has sent runners scrambling. Elite runners, who usually do one race in the spring and one in the fall, must decide which major race to run. The London Marathon is supposed to take place on Oct. 3. Tokyo’s is scheduled for Oct. 17. Berlin’s is planned for Sept. 26.

Everyday runners are weighing which race will give them the best chance of entry. On Tuesday, the Los Angeles Marathon cluttered the schedule further, announcing it would hold its race, which normally occurs in February, on Nov. 7, the same day as New York’s.

In a typical year, the Boston, Chicago and New York events draw a combined total of more than 130,000 runners, generating tens of millions of dollars for their parent organizations and largely covering the budgets for everything else those organizations do. That is unlikely to happen this year, with officials in Boston and New York making it clear that they plan to significantly reduce the size of their fields.

Carey Pinkowski, the chief executive for the Chicago Marathon, has not given up hope that his race can produce the nearly 46,000 finishers it did in 2019, but he said this “transition year” was likely to produce an altered event.

While the particulars vary from city to city, officials are all working from a similar playbook. They are trying to figure out some kind of testing regimen for participants and volunteers. Also, they are running through a series of permutations that account for the size of the roads, space between runners and logistics at the start line to keep runners safely distanced for as long as possible.

To compete, runners will probably be required to test negative for the coronavirus in the days leading up to the races, though organizers must still figure out when tests would take place, who would pay for them and the consequences for someone who tests positive.

As for the running of the races, they are likely to be a far lonelier experience, at least for the first miles, and bear little resemblance to the usual surging mass of humanity embarking on a shared mission.

In New York, which typically plans for a field of 55,000 runners who start on Staten Island and run in all five boroughs of the city, officials recently discussed the possibility of a field of roughly 30,000 runners. But even a field cut nearly in half would require longer street closures to allow more spacing between participants.

In the past, it has taken about six minutes to release 5,000 runners. Under one plan that has been discussed, according to people with knowledge of the planning, about a dozen runners would start every four seconds, which would mean taking roughly 30 minutes to get 5,000 runners across the start line if the process runs at optimum efficiency.

Metellus said that New York Road Runners, the organization that owns the marathon, and city officials were still weeks away from locking in a plan, and there were proposals for a race as large as 45,000 runners and for fewer than 25,000 runners.

The complications go beyond the clumping at the start of a big race. To get to the remote start lines in New York and Boston, tens of thousands of runners must load onto cramped buses and ferries.

There is also crowding at the finish, as exhausted runners stumble around trying to hydrate, collect their belongings and reunite with family members, and along the course itself, where spectators stand for hours on end.

“We can produce the marathon,” Metellus said. “It is all a matter of what the state, the city and the federal agencies will allow us to do.” He said officials have not decided whether to require a vaccination.

Mitch Schwartz, a spokesman for Mayor Bill de Blasio of New York, said officials were committed to planning a safe race. “Building a recovery for all of us means reconnecting with iconic events like the marathon, and we’ll do everything we can to continue this tradition,” he said.

Unlike New York and Boston, organizers in Chicago in January opened registration for the race but have yet to send out notifications of acceptance or announce the size of the field.

The Chicago Marathon has some built-in advantages: Most people can walk or take public transportation to the starting area, which is in a sprawling park in the middle of the city. And the streets in Chicago are wide, compared with, say, Main Street in Hopkinton, Mass., where the Boston Marathon begins.

Pinkowski said the size of the Chicago Marathon field might not be finalized until early summer. With vaccinations increasing and infection rates decreasing, it’s possible that the longer officials wait to make a decision, the bigger and more normal the events might be.

Recently, Pinkowski had a conversation with his operations chief about changing the contours of the course to make what is already a fast course even faster. He realized as he was speaking that it was the first time in a while he was not discussing logistics related to Covid-19.