OAKLAND, Calif. — It did not seem confrontational, and he did not sound upset. But Kyle Kuzma wanted to make his feelings known.

“I mean, it’s not like we’re panicking because he’s gone,” Kuzma, the second-year forward with the Los Angeles Lakers, said late Tuesday night. “We’re pros, too. We’re great players — or on our way to trying to be great players. So it’s all about that next-up mentality and having a will to win.”

Kuzma was speaking with reporters in the visiting locker room at Oracle Arena not long after the Lakers had demolished the Golden State Warriors, 127-101, on Christmas Day, and the “he” to whom Kuzma was referring was LeBron James, the leader of the Lakers and the most dominant player of his generation.

James had strained his left groin in the third quarter, leaving his teammates to fend for themselves against the N.B.A.’s reigning champions. The training wheels were off, and the Lakers’ lesser lights seized the opportunity.

[Read: Lonzo Ball Strives to Be a Point Guard Fit for a King]

In his own way, Kuzma appeared to be alluding to a lesson — that it is no easy thing to labor in James’s shadow — that all of James’s teammates eventually learn. And with that lesson often comes a resolve: to show that the other members of the team have some pride and skills, and are capable of at least approximating a competitive basketball team in James’s absence.

For one night, the Lakers (20-14) proved as much — and they may have more opportunities ahead, starting Thursday against Sacramento.

The Lakers announced Wednesday that James would not travel with the team to play the Kings and that his status was day-to-day after a magnetic resonance imaging test confirmed that the groin had only been strained, and not more seriously damaged.

Shortly before the announcement, James posted on Twitter: “Dodged a bullet! Sheesh” and “#BackInNoTime.”

“It’s uncharted territory, obviously, with this group,” Lakers Coach Luke Walton said Tuesday night, before the extent of the injury was known, “but this is what we’ve been talking about, and this is what we’ve tried to play for — not that he gets hurt, but being able to play and win and compete while he’s not on the floor. That’s progress, and our team is much better now than we were to start out the season.”

James played in all 82 games last season with the Cleveland Cavaliers — but he will turn 34 on Sunday.

The injury news comes during a stretch in which James has attracted different, if not more, attention than usual. Last week, in response to a question, he said he would love for Anthony Davis of the New Orleans Pelicans to join him in Los Angeles. Alvin Gentry, the coach of the Pelicans, then accused James of tampering with a player under contract, but the N.B.A. determined that James had not violated league policy. Gentry later defended the Lakers star, saying he had been put in a “bad situation” when he was initially asked about Davis.

In either case, James was broadcasting the idea that he was open to upgrading the talent around him — and, in fairness, who wouldn’t want to play with an all-world talent like Davis? But the math goes something like this: One or more of the current Lakers would need to go to New Orleans in a trade for Davis, which must mean that James thinks they are expendable. 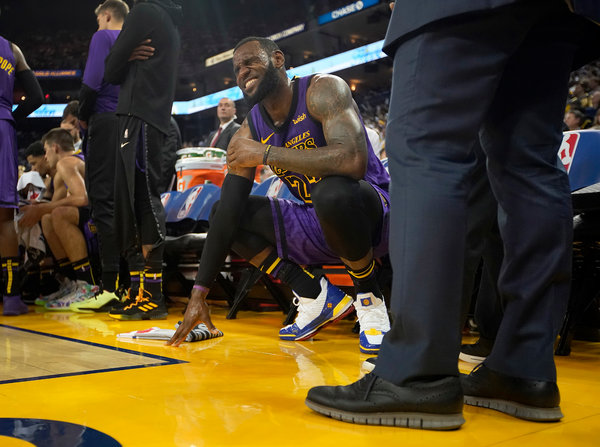 A few days later, James made the rare public misstep of posting offensive lyrics on his Instagram account. He subsequently apologized in an interview with ESPN — “if I offended anyone,” he said. The lyrics, by the rapper 21 Savage, include the phrase “getting that Jewish money,” and James said: “I actually thought it was a compliment, and obviously it wasn’t through the lens of a lot of people.”

Amid that situation, the latest episode of James’s H.B.O. show “The Shop” aired. In it, James described N.F.L. owners as “old white men” with a “slave mentality.”

By Tuesday night, though, the focus was back on LeBron James the basketball player. He was brilliant, collecting 17 points, 13 rebounds and 5 assists as he led the Lakers to a 14-point advantage over Golden State early in the third quarter. But after lunging for a loose ball, James felt some discomfort in his groin, he said, and he may have aggravated the injury when he tried to make a defensive play. He soon left for the locker room.

The Warriors rallied, cutting the lead to 2 late in the third quarter. But then something unexpected happened: The Lakers pulled away behind players like Rondo (15 points, 10 assists), Kuzma (19 points, 6 rebounds), Brandon Ingram (14 points) and Ivica Zubac, a 21-year-old center who finished with 18 points and 11 rebounds while shooting 9 of 10 from the field.

Zubac has gotten an opportunity only in recent days, because JaVale McGee, the team’s starting center, has been sidelined by an illness. Zubac had barely been playing.

“It’s tough, especially mentally — it’s the worst,” Zubac said. “Everyone’s saying: ‘You’ve got to stay ready. You’ve got to stay ready.’ And you know you can play, but there are a lot of guys ahead of you in the rotation, so you have to wait until someone goes down, and that’s your only chance. And you’ve got to step up. If you don’t step up at that time, you’re not playing, like, for the next 20 games.”

Zubac has channeled that sense of urgency into incredible production, averaging 17.7 points and 8.7 rebounds while shooting 78.1 percent from the field in his last three games — and perhaps the rest of the team will look to him as an example if James is out for a while.