At 15-years-old, Kunj Changela spends up to 20 hours a week either training for or playing cricket, a passion born in his parents' western Sydney backyard.

“People think I am crazy or something because I love the game that much,” he said. 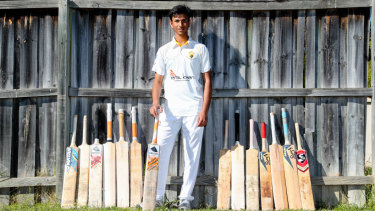 And under Cricket Australia's current arrangement for counting its players, the Kellyville Ridge teenager is also eight people.

The peak cricketing body has boasted of a healthy growth in participation rates over the last decade, currently claiming there are about 1.65 million Australians who play the sport with nearly a million children playing in sport classes at school.

The rest is made up of registered players which the Australian Cricket Census, drawing from the governing body's MyCricket database, said sits at around 684,356 registered club cricketers.

But manually counting unique cricketers in that same database found 247,060 players, fewer than half the number claimed, the Herald has revealed.

It’s cricketers, like Kunj who excels in the sport, who play across multiple teams – such as local, school, state or national teams, that are in the database several times, accounting for numerous different players.

The body's acting executive general manager, community cricket Kieran McMillan said the body was working towards getting a closer idea of the number of unique crickets next year once all players registered online.

Cricket Australia has reported annual increases in participation over the last year, however at the same time the number of cricket clubs has fallen from 4200 to 3500.