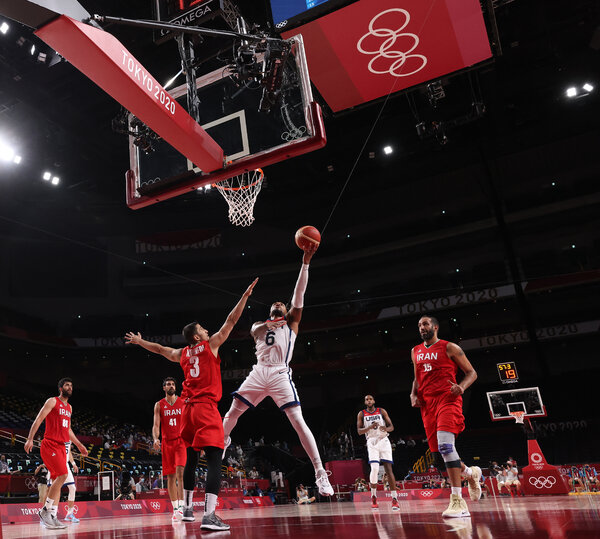 Ever since the first Dream Team was assembled in 1992, convincing victories like this one have been expected from the U.S. men’s team. Just one Olympic team in that era has failed to win gold, and the bronze medal the 2004 team did win was treated as a disaster.

So there was plenty of disquiet after this year’s men’s team lost exhibitions to Nigeria and Australia, then its Olympic opener, 83-76, to France.

But while each of those U.S. opponents had at least some N.B.A. and N.B.A.-quality players, Iran was simply overmatched on Wednesday. A glance at its roster reveals that its best players are employed by the Sichuan Blue Whales of China and Iranian teams like Chemidor Qom.

The U.S. was up by 16 after the first quarter and by 30 at the half. The Americans’ speed and ball rotation helped them get more than their share of open shots, particularly 3-pointers, and their defensive intensity prevented Iran from gaining any real momentum on offense.

Damian Lillard led the U.S. with 21 on seven 3-pointers, six of them in the first half. At one point in the second quarter, after Lillard swished a perfect 3, his defender, Hamed Haddadi, Iran’s best player, raised his hands in a gesture that said, “What are you going to do?

“Today we came out with more freedom as individuals and took the shots that we normally like to take, and they went in tonight,” Kevin Durant of the U.S. said. “And we guarded up, so it was a good step.”

Iran’s Saeid Davarpanah said: “We play against superstars of the world and we just enjoy it.”

The U.S. will finish its pool play on Saturday night against the Czech Republic, a team that beat Iran by only 6 points. The top two squads in each of the three groups will advance to the quarterfinals, along with the two top third-place teams, so a U.S. berth in the knockout stage was never in doubt. And the team still has undeniably the most accomplished roster at the Games.

But matchups against some serious teams led by N.B.A. stars — perhaps Spain with Ricky Rubio and the Gasol brothers, or Slovenia with Luka Doncic — are still to come. And the U.S. must win three straight knockout games to take the gold medal that everyone expected.

As the U.S. team integrates the three players who played in the N.B.A. finals and did not join the team until Sunday — Devin Booker, Khris Middleton and Jrue Holiday — it should continue to improve.

But in an Olympics that has already had its share of upsets, no one is booking a sure gold medal for the U.S. yet.