GLENS FALLS, N.Y. — Joe Girard III, an 18-year-old senior at Glens Falls High School and a pitiless scoring machine, hurried across the school’s hardwood court, placed his inhaler on a table and started his basketball season with a passing drill.

It was a recent afternoon. He looked worn. Two days earlier, he had led his school’s football team to a state title as a quarterback. He threw two touchdown passes, ran for another two scores and earned most valuable player honors.

Now, at basketball practice, red dots marked where a football opponent had stepped on his left hand with his cleats. His right hand was swollen from being sandwiched between the helmets of two players.

And yet today he and his teammates threw a 41-ounce basketball — almost twice as heavy as a game ball — to one another. He caught the heavy ball last. He squared up on the left wing — just inside the 3-point arc — and shot it. It went in.

With that shot, Joe Girard III’s pivot to basketball was complete.

“Those used to be air balls,” said Rob Girard, the team’s head coach and a cousin of the marksman. “He’s getting stronger.”

Girard, who is 6-foot-1 and 185 pounds, and goes by JG3, averaged 50 points a game and set the state’s career scoring mark last winter with 3,306 points. Perched atop the scoring annals, he has an enviable challenge ahead on his home court in the Adirondack foothills — the same court on which another productive scorer, Jimmer Fredette, elicited oohs and aahs not too long ago. 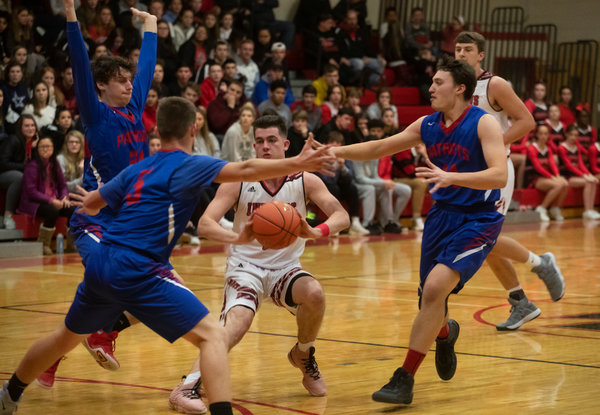 “The question now is: What do you do after averaging 50?” his father, Joe Girardi Jr., said. “He has a year to go, which is scary.”

It all started at the free-throw line. As a fifth grader, Girard won a national contest by making 25 of 25 free throws. As a seventh grader, he played on the high school’s freshman team. As an eighth grader, he scored the opening basket of his first varsity game and finished with 31 points, including a pull-up 3-pointer at the buzzer to win the game. As a ninth grader, he scored 52 points in one game. As a 10th grader, he once scored 41 points, grabbed 19 rebounds and fell one assist short of a triple double.

Those are absurd numbers for almost any player, much less one in high school, where games last only 32 minutes, compared with 40 in college and 48 in the N.B.A.

As a junior, he recorded his first dunk in a game. His cousin Trent, who is 5-foot-5, threw the ball off the backboard to Girard to earn the assist.

“There are times when you say, ‘Jesus, that’s not a good shot,’ ” Rob Girard, the coach, said. “But when he hits four out of six of them, what can you say? You go with it.”

Girard fired from all over last season. He scored 60 points in a game twice and never scored fewer than 41 points as his team went 20-3. He broke his own team record when he made 12 3-pointers in a game, and he stitched together four consecutive games with 50 points or more.

When defenders locked arms while trapping him after he crossed the half-court line, the coach told his star to attack the linked limbs to force referees to call a foul. With seven games left in his junior season, he surpassed Los Angeles Lakers guard Lance Stephenson’s state-record 2,946 career points. In his final game as a junior, a sectional semifinal, Girard scored 56 points.

“I saw those numbers, and I couldn’t believe it,” said the retired N.B.A. player Kenny Anderson, who scored 2,621 points at Archbishop Molloy High School in Queens and held the state record for 15 seasons. “In 32 minutes. Amazing. Crazy. Wild. Regardless of who he is playing, with those numbers, I was like, wow, that kid is balling.”

Girard was raised by a gunner. His father scored 2,179 points at St. Mary’s in Glens Falls and Shenendehowa High School in Clifton Park, N.Y., and is 44th on the state’s career scoring list. He later played for John Beilein at Le Moyne College in Syracuse.

The Girard name is known all over Glens Falls. The boys and the girls basketball teams are each coached by a Girard.

“For good and bad, Glens Falls is known as the Girard Town,” said Joe Girard III, who has two cousins as basketball teammates. “We’re all over the place.”

Another family in town scored some points, too. When he was younger, Joe Girard III rode his bike to Sanford Street Elementary School and pedaled past Ogden Street, where he could see a growing collection of trophies in the Fredette family’s window.

That a single city could produce these basketball look-alikes could just be coincidence, but while Jimmer Fredette was scoring 2,404 points at Glens Falls from 2003 to 2007, he also was working as a counselor at a basketball camp in town that had been held on fall Saturdays for decades. Girard was a camper there, just as Fredette had been.

Fredette’s brother, T.J., remembered Girard being called upon at a basketball clinic to demonstrate a ball-handling drill. “He zipped right through it, spider dribble and all,” he said.

By the time Jimmer Fredette earned national player of the year honors at Brigham Young, in 2011, Girard, 11 years younger, was being called the next Jimmer. Girard played one season for Tony Hammel, who had coached Fredette at Glens Falls, before Girard’s uncle took over the program. Girard walks by Fredette’s framed jersey outside the gym nearly every day.

“There was always something just different about Joe,” Jimmer Fredette said in a phone interview from China, where he plays for the Shanghai Sharks and in November scored 75 points in a Chinese Basketball Association game. “He’s just broken every milestone by a long shot. He is a deadeye shooter, but I work with him on his middle game: floaters, runners, shots he can be creative with in college and beyond.”

Girard used to hear chants — “Jimmer’s better!” — when he missed shots, but those faded in recent seasons. Still, as they did with Fredette, college coaches are figuring out where Girard fits moving forward. One of 32 players invited to try out for the United States’ under-18 team in Colorado in June, he did not make the final cut. Playing at Peach Jam, the main event of Nike’s Elite Youth Basketball League, in July, he was less of a scorer alongside center Isaiah Stewart, one of the nation’s top-rated recruits. Twice, Girard went scoreless against better competition.

“He’s got to become a little more efficient in being able to maneuver his way into shots,” said Tom Konchalski, a talent evaluator and publisher of High School Basketball Illustrated, a scouting newsletter for coaches. “He’s not a point guard, but he has intergalactic range. If he’s patient, he can have a good career.”

College coaches came to town to pitch their programs in the fall. Girard’s mother, Arleen, ordered from Panera Bread for most, but she made chicken parmigiana for Mike Krzyzewski of Duke. Phil Martelli, from St. Joseph’s, told Girard he should wear Bubble Wrap, but Girard absorbed his share of blows in football as a quarterback and defensive back.

“I had a shoulder problem, so I used every other part of my body to tackle a guy; got a knee to the rib,” he said, recalling a hit that took his breath away. “Felt like I was going to puke blood, but my ribs were still there, so I played on. It’s senior year. I want to help these guys out.”

Syracuse basketball fans made their pitch, as well. One night after coming home from a football game on the road, his mother noticed a round orange object glowing by their house. It was just before Halloween, but it didn’t seem right.

“I thought our neighbor put an inflatable pumpkin on the front yard,” she said. “As I got closer, I saw the thing with a spotlight on the front and realized it was an inflatable Syracuse mascot. I panicked, got out, and tried to unplug it. I was thinking, What if other coaches saw photos? He hadn’t committed yet!”

Girard later announced, in a ballroom at the Queensbury Hotel, that he would attend Syracuse. After a news conference, he called Gerry McNamara, the assistant coach who had recruited him. He treated the offer like a marriage proposal.

The bromance moved to the back burner as Girard started his senior season. In the opener, he struggled to find his stroke. He missed his first free throw, but made his second. He then missed his first 11 tries from beyond the 3-point line before making one with 30 seconds left in the third quarter. He finished with 34 points in a 92-57 win.

“Still getting my legs,” he said.

He found them soon after. In his next game, he scored 41 points. In his third, 53. In his fourth, he missed his first six 3-point attempts and shot an air ball. Opposing fans chanted, “Overrated!” He motioned for them to raise the volume. Before sitting out for the last three minutes of a 96-65 victory, he had scored 57 points.

“You lit it up,” his father, who tallies each point in his head and checks the score book after each game, told him. “Beyond lit up!”

On a recent morning, Girard pulled up a chair at Poopie Di Manno’s Lunch, a greasy spoon with a salty owner. He ordered chocolate milk and a breakfast sandwich. As the waitress retreated to the kitchen, Marcia Winslow approached him.

“I don’t want to interrupt you,” Winslow said. “But before you get superfamous, can you just give me a signature? You’re totally awesome.”

“Thank you,” he said as he signed her menu.

Winslow explained that she had a shrine to Jimmer Fredette in her house, a wall of things he had signed, including pictures. “Maybe you’re going to replace him,” she said.