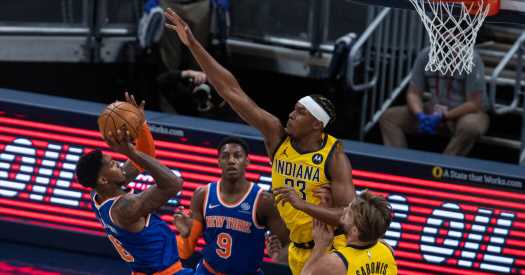 In some obvious ways, Myles Turner and T.J. McConnell couldn’t be more different as basketball players. Turner is a 6-foot-11 center who does much of his finest work above the rim. McConnell is a 6-foot-1 point guard who plays a more earthbound brand of the game. Turner swats shots, while McConnell picks pockets. One is an ominous presence in the paint; the other, a self-described “pest” who roams the perimeter.

But in a challenging season for the Indiana Pacers, Turner and McConnell have come together to press, strip and thwart opponents, a two-man misery machine. In the process, they could become the first pair of teammates to lead the N.B.A. in blocks and steals since the 2000-1 season, when Theo Ratliff (blocks) and Allen Iverson (steals) of the Philadelphia 76ers did it.

“The defensive end is just about effort,” said McConnell, who has come off the bench to average a league-leading 1.8 steals per game. “That’s truly what it comes down to, and that’s something I can control. I can always give as much effort as possible.”

Turner, who is averaging a league-leading and career-best 3.4 blocks per game, gave the Miami Heat enormous problems in back-to-back wins over the weekend, blocking a total of 10 shots. On Sunday, he had two of them in overtime to help the Pacers seal their 109-106 victory.

“No shot is safe around him,” McConnell said.

They say they have made each other better players — “Knowing that you have someone who is going to match or even amplify your intensity only helps you,” Turner said — and they have probably played a part in boosting each other’s league-leading totals.

McConnell feels that he can jump into passing lanes and be even more aggressive, he said, because he knows Turner is stationed behind him as a safety net. Turner has gone so far as to encourage McConnell and the team’s other guards to funnel players in his direction.

“He’s always talking to me about how we can kind of get each other going,” McConnell said. “He’s even giving me angles to send players toward the rim. If I foul someone, he’ll come up and be like: ‘Hey, don’t foul. I got you. I’ll block the shot.’ ”

Anything can happen ahead of Thursday’s trade deadline, especially for a struggling team like the Pacers, who fell to 19-23 after losing to the surging Milwaukee Bucks on Monday night. Several teams are reported to have interest in Turner, though the price would be high. 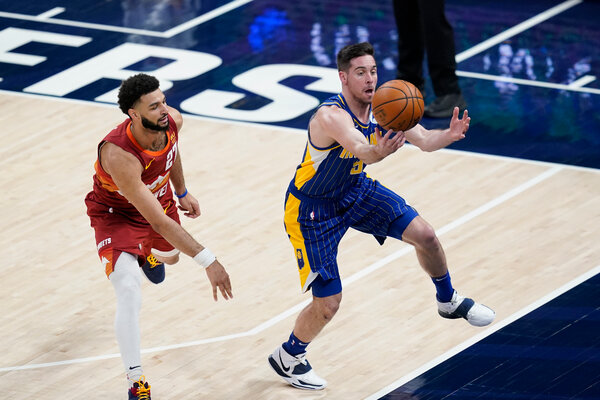 For now, Turner and McConnell continue to cultivate their on-court bromance — one that began to take shape in 2015 when they found themselves in three of the same pre-draft workouts, including one for the Pacers. They already knew of each other, having both played big-time college basketball — McConnell at Arizona and Turner at Texas.

In their workout for the Pacers, they teamed up in a game of three-on-three — and dominated, McConnell said. The Pacers selected Turner with the 11th pick that year. McConnell went undrafted.

“He always jokes about it: ‘I’m the one who got you drafted here,’ ” Turner said.

McConnell eventually signed with the 76ers, who were wading through the thick weeds of their notorious tanking epoch. It was an experiment that gave McConnell an opportunity to prove himself in the 2015-16 season, one that he did not waste. In addition to operating as a pass-first distributor — he averaged 4.5 assists in 19.8 minutes a game — he collected 95 steals.

He stuck with the 76ers for four seasons, and occasionally found himself bumping in to a familiar figure: Turner, who had quickly emerged as one of the league’s most fearsome interior defenders. McConnell considers himself fortunate that he never had any of his shots blocked by Turner. And in a way, McConnell may have one-upped Turner by stealing one of his passes when they were first-year players.

“I will make sure he is aware of that stat,” McConnell said.

In their second season, though, Turner erased a potential assist for McConnell. The 76ers were playing the Pacers when McConnell ran out in transition and tossed a lob to his then-teammate Robert Covington for what nearly everyone in the arena must have assumed was an easy alley-oop layup. But at the last moment, Turner came from behind to swoop through the lane and rejected Covington at the rim.

McConnell, who signed with the Pacers before the start of last season, and Turner, who has spent his entire career in Indiana, both say that a lot of what they do on defense cannot be taught. Turner described his shot-blocking ability as “a gift.” McConnell said his type of defense was a mind-set.

“I just want to make it as hard as possible for guys to get into their offense, for them to get over half court — anything,” he said. “You come into the game, and I’m not physically imposing or all that quick. But I’ll pressure you.”

While they lean on instinct, timing and effort, they have refined their skills. In college, Turner said, he was often more athletic than the players he defended. But when he entered the N.B.A., he discovered a league populated by decathletes like Russell Westbrook — players who could bound past him or over him. So Turner polished his positioning with the help of Dan Burke, a former assistant coach for the Pacers who now works for the 76ers.

McConnell was around basketball from an early age. His father, Tim, was his coach at Chartiers Valley High School outside Pittsburgh, where the players occasionally did defensive slides while holding bricks.

“We wouldn’t do it that often,” McConnell said. “But we definitely did it.”

As he got older, McConnell would study Chris Paul’s defensive prowess — “He just makes it so hard on guys,” McConnell said — while earning his way into the N.B.A. with the same sort of resolve. McConnell is routinely underestimated by opposing players, Turner said.

“Especially by the young guys coming into the league,” Turner said. “They look at him, like, ‘Who is this white boy in front of me?’ But T.J., it’s like he takes that to heart. He loves the challenge — the challenge of people looking at him that way.”

Earlier this month, before the All-Star break, McConnell had one of the best games of his career, finishing with 16 points, 13 assists and 10 steals in a win against the Cleveland Cavaliers. During one extraordinary stretch of the first quarter, he had steals on five straight possessions. He set an N.B.A. record with nine steals in the first half.

“That’s as good of a game as you’re going to see,” the Pacers’ Malcolm Brogdon said.

McConnell also leads the league in deflections, though he doesn’t want to know his tally in real time during games, he said, because he worries that he might become “overzealous.”

At the same time, McConnell has managed to block 14 shots. Every time it happens, he said, it comes as a total surprise. And for the briefest moment, he gets a glimpse at what life must be like for his taller teammate.