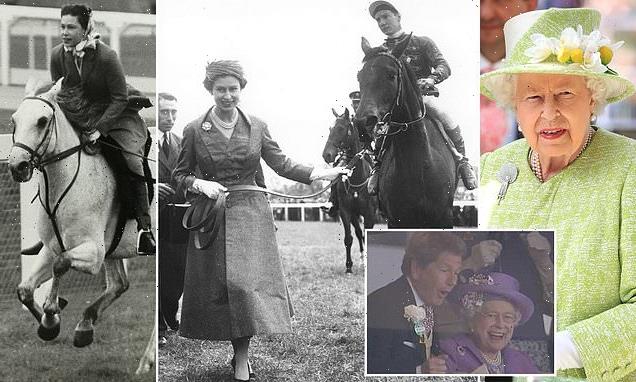 The beaming smile caught on camera as, from the royal box, she watched her filly Estimate win the 2013 Ascot Gold Cup was evidence, if it was needed, that The Queen was never happier than on a racecourse watching her horses.

Those close to her who work in the sport of horseracing have long known where the late monarch’s heart truly lay.

Throughout her life, the Queen’s sense of duty never failed. During what must occasionally have been some pretty dreary official engagements, there was never the slightest sign that she wished she could be somewhere else. 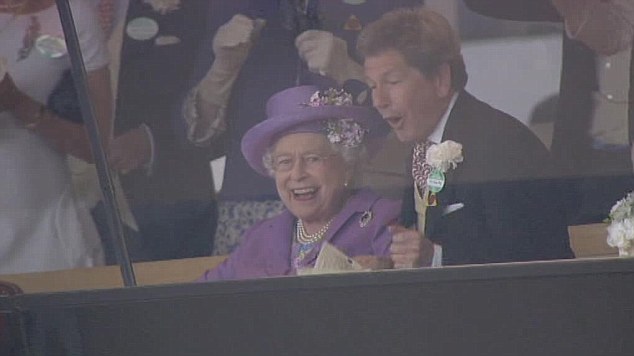 The Queen was never happier than on a racecourse watching her horses. Pictured watching her filly Estimate win the 2013 Ascot Gold Cup 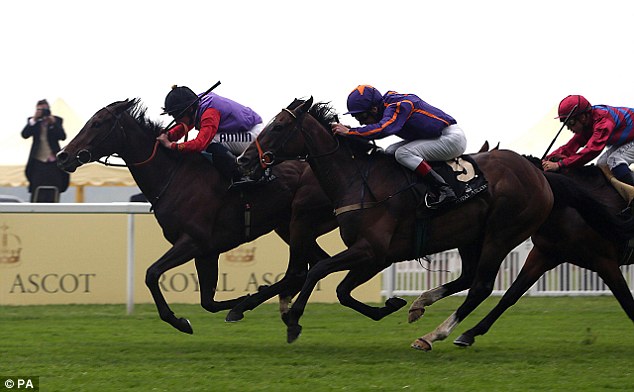 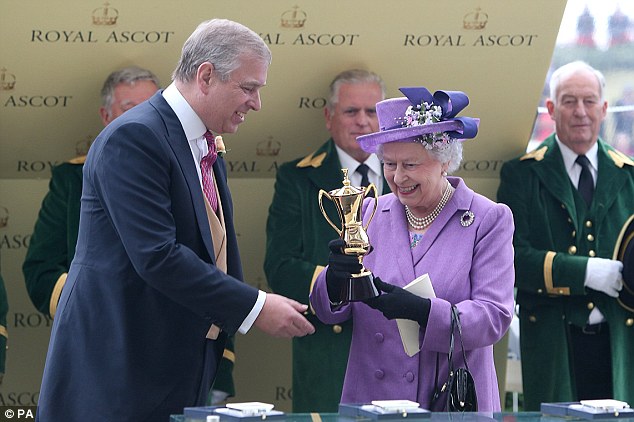 But if she had ever conducted a careers interview, it is virtually unthinkable the advice would not have been the recommendation of a career with an equine theme.

Indeed, John Warren, her racing adviser, once said: ‘If the Queen wasn’t the Queen, she would have made a wonderful trainer. She has such an affinity with her horses and is so perceptive.’

The only days ring-fenced in her diary every year were Derby day and Royal Ascot. The Racing Post, the sport’s dedicated daily newspaper, was regular morning reading.

The Queen loved her horses. She loved seeing them race and loved making breeding plans for her mares at the Royal Studs.

There were hand-written letters each autumn to her trainers detailing the yearlings that they were being sent.

She also loved the trips in the spring to see them and their trainers as well as the hours just chatting with the people who looked after her horses.

Those people got to see the Queen in a different, more relaxed light. There was no standing on ceremony and what surprised some was a remarkable memory for her horses. 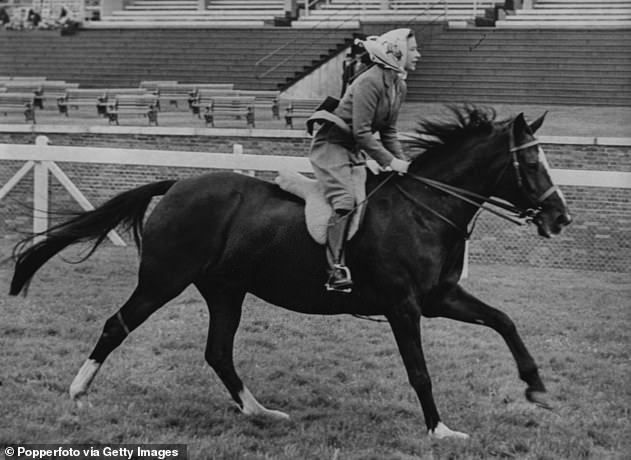 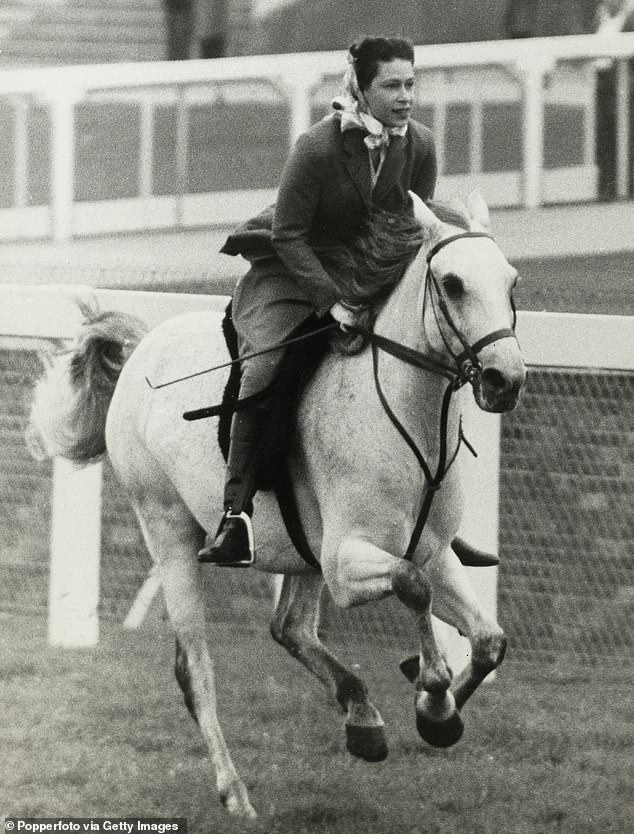 The Queen loved her horses. Pictured cantering at Ascot ahead of meeting start in June 1961

The Queen’s memory for face was matched by the ability to recognise the horses brought up on her Sandringham Stud.

There is a story that one morning while visiting Richard Hannon Snr, who joined her trainer roster in 1998, carefully-laid plans to send her string up the gallops in pre-planned order ended in a muddle. The Queen still recognised every one.

She had shown back in 1955 that she had a keen eye for her stock when two of her yearlings were inadvertently mixed up while being transferred to the care of Newmarket trainer Sir Cecil Boyd Rochfort.

It was an error spotted by the Queen when she visited the stable even though she had not seen the horses for 18 months.

Racing on the flat was the focus of the Queen’s racing operation but her first winner came over jumps in 1949. 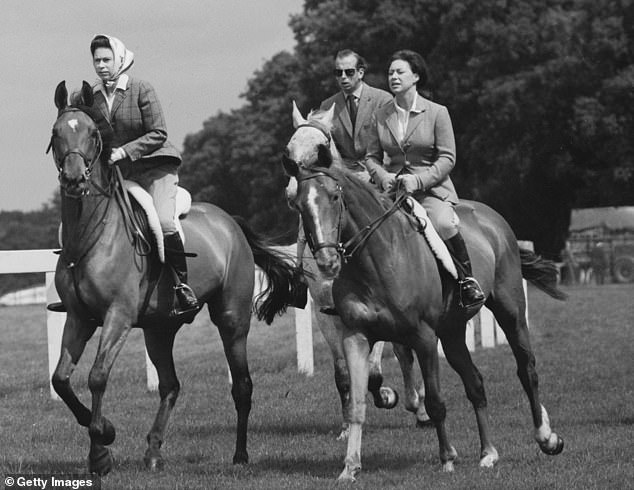 The Queen, left, Princess Margaret and the Duke of Kent riding at Ascot racecourse in 1968 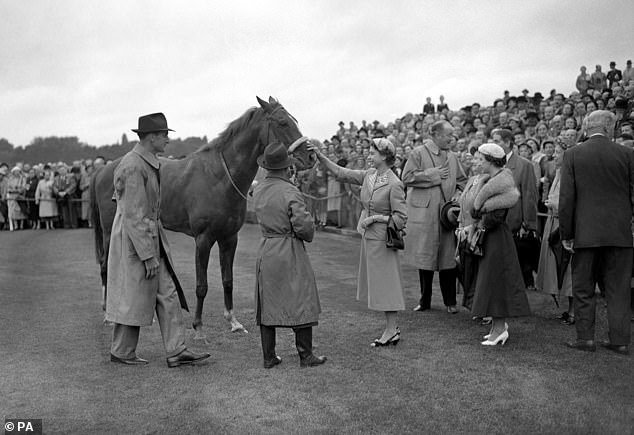 Monaveen, trained by Peter Cazalet, carried the Queen’s colours when he won at Fontwell but was actually shared with her mother.

Her first flat winner was Astrakhan, who had been given to her by the Aga Khan in 1947 as a wedding present. Despite troublesome knees, he won at Hurst Park in 1950.

It would turn out to be the only flat winner to win carrying the Queen’s colours of scarlet, purple hooped sleeves and black cap as in 1952, on the death of her father King George VI, she inherited the colours associated with his runners.

They were almost carried to Derby victory immediately when Aureole, her first runner in the Derby, was second to Sir Gordon Richards-ridden Pinza in 1953.

She would never get closer to winning British flat racing’s most prestigious race – and did not have a runner this year – though Sir Michael Stoute-trained Carlton House must have raised royal pulses when, despite an injury-interrupted preparation, some trouble in running and losing a shoe, the Ryan Moore-ridden colt went tantalisingly close when third to Pour Moi in 2011.

While Boyd Rochfort-trained Aureole is probably remembered most for his Derby near-miss, he also was probably the best colt the Queen ever owned despite him possessing a difficult temperament. 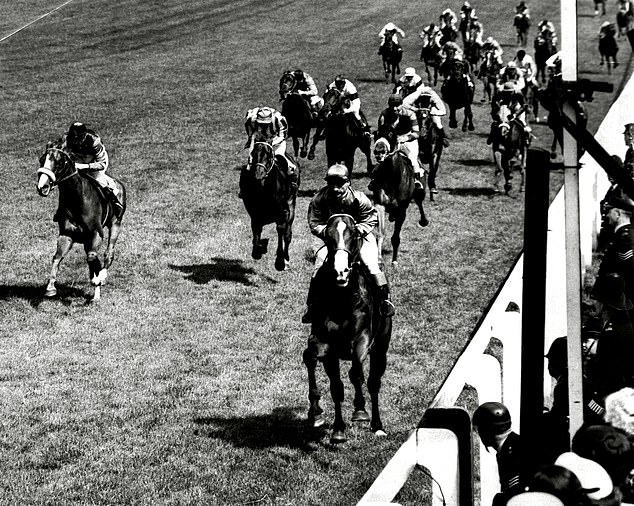 He also finished runner-up to Pinza in the 1953 King George VI & Queen Elizabeth Stakes but, 12 months later, as a four-year-old, became the Queen’s only winner of the race named after her parents, a victory probably made even sweeter as Aureole had been bred by her father.

Aureole also won the Coronation Cup at Epsom and the Hardwicke Stakes at Royal Ascot, successes which saw him named as Europe’s best older horse in 1954 and which enabled the Queen to be champion owner of the year.

The Queen’s first Classic was won by Pall Mall, a top class miler trained by Boyd Rochfort who won the 1958 2,000 Guineas ridden by Doug Smith at odds of 20-1. But that win was shown to be no fluke. He went on to be a dual winner of Newbury’s Lockinge Stakes.

But most of the Queen’s best horses subsequently turned out to be fillies. 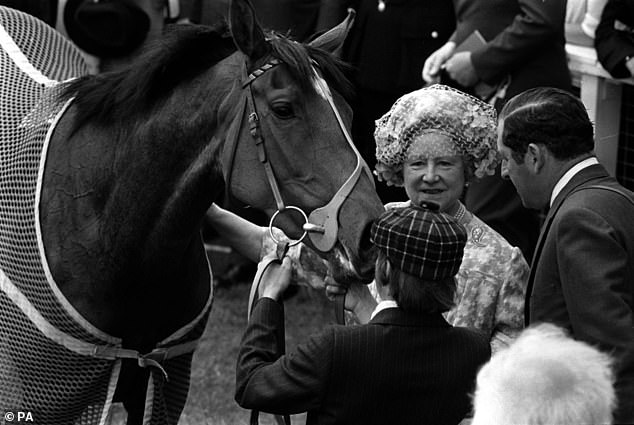 Most memorably, the Dick Hern-trained Dunfermline (above) won the Oaks and St Leger

Most memorably, Dick Hern-trained Dunfermline won the Oaks and St Leger, ridden by Willie Carson, in 1977, the year of the Queen’s Silver Jubilee celebrations.

Carrozza also won the 1957 Oaks after finishing fourth in the 1,000 Guineas, a Classic won by Hern-trained, Joe Mercer-ridden Highclere in 1974 before she also won that year’s French Oaks (Prix de Diane) at Chantilly.

The Queen was present at the French track to witness the success.

After being retired to stud, Highclere’s foals included the Height of Fashion, who was associated with two of the Queen’s most difficult racing episodes. 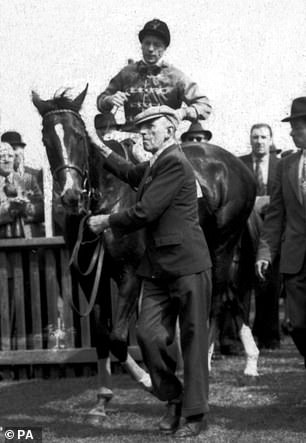 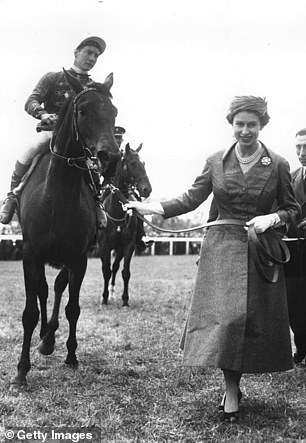 The fillies’ sale to Sheikh Hamdan Al Maktoum in 1982 for £1.5million looked good financial sense at the time, especially when she failed to deliver on her early racing promise.

But at stud for the Sheikh, she proved a revelation with foals including 1989 2,000 Guineas and Derby winner Nashwan plus his hugely successful brother Nayef.

The money the Queen received for Height of Fashion was also used to buy West Ilsley stable in Berkshire, a move that put the Queen in a position that invited fierce criticism. Under the direction of her then racing adviser Lord Carnavon, resident trainer Hern had his tenancy ended in the aftermath of a hunting accident which left him paralysed from the neck down and wheelchair-bound. He was replaced by Lord Huntingdon.

There were no horses of the quality of Nashwan in the royal colours in subsequent years. The massive Arab investment in the sport priced the Queen and many other traditional owners and breeders out of the market.

The sensitive political situation also for many years precluded the Queen using from the best and dominant stallions based in the Irish Republic. 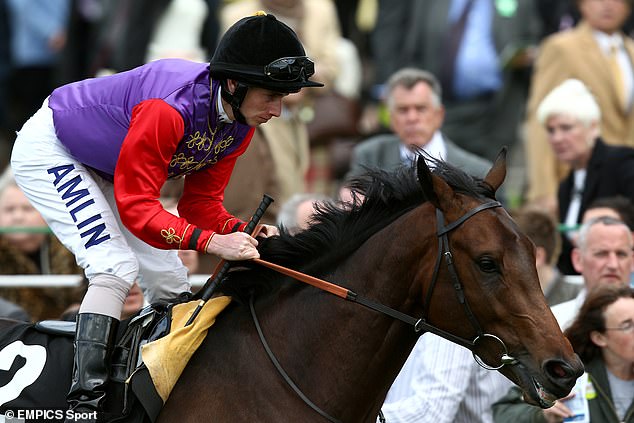 But in recent times, with a little help from her racing friends who gifted her some well-bred horses to race along with her homebred string, the Queen had raced more competitive horses.

Carlton House, a gift from Sheikh Mohammed, and Estimate, a birthday present from the Aga Khan, led the way. Going into 2019, her string included offspring of leading sires Dubawi, Frankel and Galileo.

Her best horse of recent seasons was Dartmouth, whose eight wins included the 2016 Hardwicke Stakes. Tactical, trained by Andrew Balding, gave her a 24th and final Royal Ascot success in 2020. Last year’s Royal meeting was the first the Queen missed in her 68-year reign, and she was also absent this year.

A tally of 19 wins in 2018 was the first time in five years the Queen’s number of domestic Flat successes in a year had dropped below 20 and her team of trainers had also increased.

Led by Newmarket-based Sir Michael Stoute, William Haggas and Michael Bell, they had most recently had been joined by John Gosden and also included Balding, Roger Charlton, Richard Hughes and Richard Hannon Jnr.

She also maintained the link to the jumps, previously championed by her mother, by having a handful of jumpers with Nicky Henderson and Charlie Longsdon. 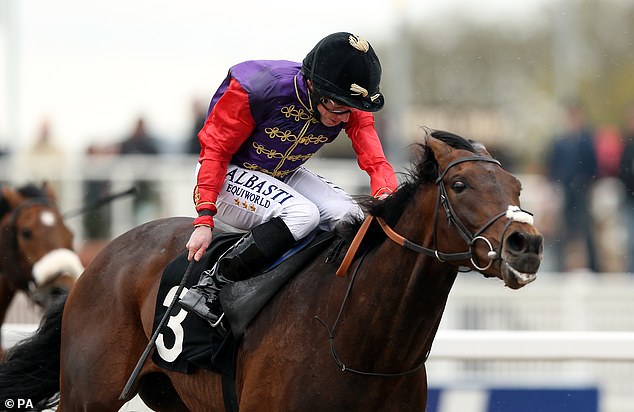 Her horse of recent years was Dartmouth, whose eight wins included 2016 Hardwicke Stakes

But if there was a winner from the Queen’s passion for racing, it was the sport itself. It was not possible to have a better ambassador.

The royal patronage has helped elevate the status of horseracing in Britain, which has not enjoyed the financial advantages of some overseas jurisdictions.

This is illustrated by the heightened worldwide status held by Royal Ascot, which now regularly attracts runners from America, Australia and the Far East keen to experience a unique British event with the Queen at its heart.

Royal winners were invariably roared home – especially at Ascot. Racegoers seemed to appreciate that a woman who had devoted her life to duty serving her country was able to enjoy a moment of her personal, private passion. 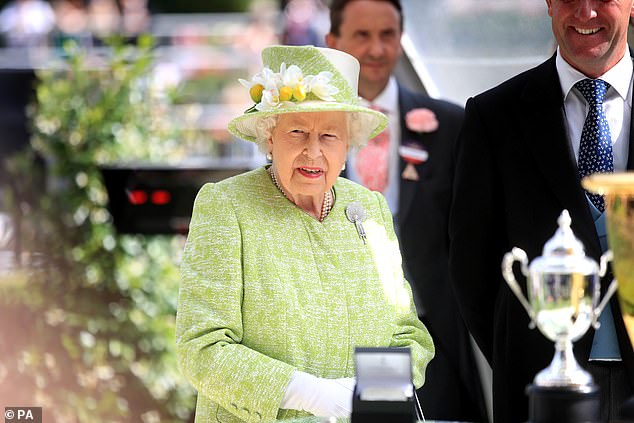 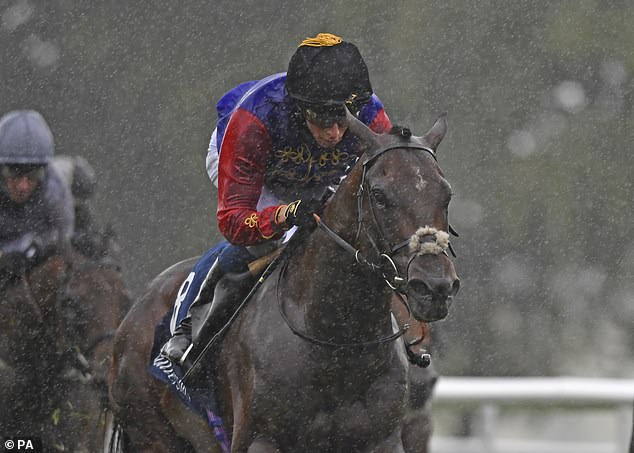 But Tactical, trained by Andrew Balding, gave her her 24th Royal Ascot success in 2020

That was what racing appeared to be. A brief break from the strict timetable of official duties. A chance to relax and laugh as she did on another occasion when hosted by Hannon Snr.

That morning an Indian rider, who had arrived late to work, got mixed up with the Queen’s horses which had been brought together for her inspection.

All attempts to get the Indian rider to leave with his horse floundered on his lack of English. Every Hannon instruction was greeted with a ‘Yes, boss’ but no action.

Exasperated Hannon, turned to the Queen and said: ‘Ma’am, do you speak Indian?’

‘No, I am afraid I don’t,’ came the reply to which Hannon retorted: ‘Well, you ought to Ma’am. You ruled the place for long enough.’

There was no royal scowl, just a beaming monarch and laughter in the trainer’s jeep.

The Queen was in her element.