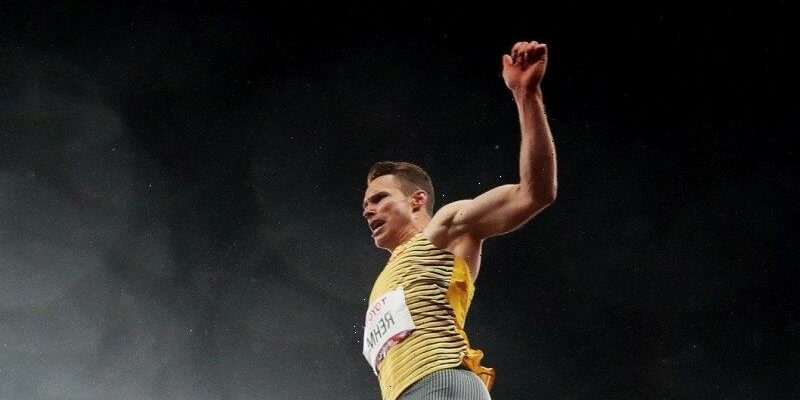 Tokyo: By many measurements, Markus Rehm is the global emblem of these Paralympic Games, an amputee who has leapt further in the long jump this year than anybody managed even in last month’s Olympic final.

An athlete missing his lower right leg upstaging his able-bodied peers? It sounds too good to be true, and sadly, in the estimation of the Court of Arbitration for Sport, it is. 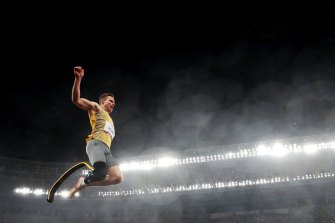 Banned from the Olympics over evidence that launching off a carbon-fibre prosthesis gives him an artificial advantage over non-amputees, this German phenomenon, who carries mystique as the “Blade Jumper”, agitates almost as many people as he captivates.

As has become customary in Rehm’s masterclasses, the contest was effectively killed off with his first attempt, eclipsing his closest challenger, France’s Dimitri Pavade, by 83 centimetres.

In the space of an hour, this natural-born renegade, determined to subvert all that his audience think they know about jumping, propelled himself beyond eight metres three times, a mark that nobody else in the history of his T64 class has surpassed.

While he could not quite replicate the pyrotechnics he had produced in Poland in June, when he extended his own world record to 8.62 metres, his winning distance here of 8.18m would still have been sufficient for joint-fourth at the Olympics. True to his restless nature, Rehm was quick to find fault with his displays. 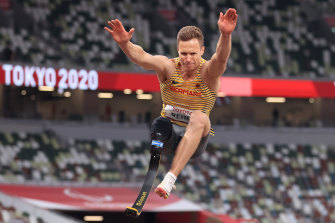 “I want to be honest, I aimed for further distance,” he said. “I’m already thinking about what was missing here. I’m really fast, but I just didn’t nail it on the board.

“I had a guy specialising in biomechanics filming me, and we’ll analyse it together later. I sensed that the best was possible.”

If Rehm reflected how far he had moved the needle in his sport, he would have cause only for contentment. When he first dedicated himself to long jump a decade ago, the world record was still below seven metres.

Today, he is counted among the top 15 performers ever to have graced this event.

“It’s not my biggest dream to compete at the Olympics. My dream is to bring Olympic and Paralympic athletes closer together.”

But a frustration gnaws away at him that he cannot showcase this extraordinary transformation in an Olympic setting.

Twice he has pressed his case, for Rio and Tokyo, and twice he has been rebuffed. 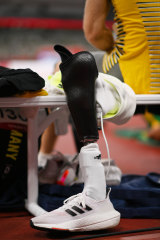 A detailed view of the prosthetic used by Rehm – himself of a prosthetist – at the Paralympics.Credit:Getty

“I decided not to watch the Olympic final this year,” the 33-year-old said.

“I didn’t want to get angry.

“I had a tough week after the decision was made that I couldn’t compete. I really struggled, because I never received a reason why.

“I was promised a response by August 5. It’s now the start of September and I still haven’t heard anything.”

Horst Strohkendle, who created the system of Paralympic classification for wheelchair basketball, argues that prosthetics are becoming so sophisticated there will soon be examples of disabled athletes overtaking their able-bodied contemporaries.

One intriguing angle of Rehm’s situation is that he is a prosthetist by profession, constantly researching how best to support people with a similar impairment.

He had his right leg amputated below the knee after a terrible accident on a family holiday at 14, when a motorboat drove straight into him while he was out wakeboarding.

But Rehm fiercely disputes any suggestion that he is out to game the system, explaining that he has made an offer to World Athletics and the International Olympic Committee to compete outside the rankings, without the chance of a medal.

“It’s not my biggest dream to compete at the Olympics,” he said. “My dream is to bring Olympic and Paralympic athletes closer together.

“I have always been transparent. This was never about getting myself an advantage. Other athletes have exactly the same blade as I use.

“But I’m still jumping quite a bit further. Why is there such a gap? There is an athlete behind the blade. What should I do? I don’t want a blade, but I can’t jump on one leg.

“For me, it’s not about the medals. When I come back for my medal ceremony here, I will be super happy about it.

“Even if I jumped the farthest at the Olympics, I would still be happy to return to the Paralympics a few weeks later.

“This is where I belong. I just hope that one day, they realise that we should work together.”