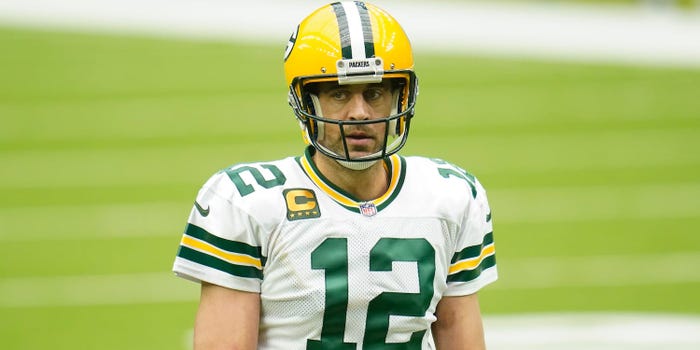 The Green Bay Packers stood pat at the trade deadline, opting not to make any moves to bolster a 5-2 roster.

The Packers were rumored to be involved in trade negotiations, namely with Houston Texans wide receiver Will Fuller, a speedy, deep threat with 490 receiving yards and 5 touchdowns on the year.

However, the Packers and Texans couldn't work out a deal at the deadline. ESPN's Dan Graziano reported that the Packers didn't want to pay the price for Fuller — likely a first- or second-round draft pick — who can become a free agent at the end of the season.

As Graziano wrote after the deadline, the Packers "draft and develop" instead of paying high prices for talent.

The Packers' conservative approach has left them short on talent

The Packers' "draft and develop" method has worked in many cases. As Graziano noted, star receiver Davante Adams was a second-round pick. Undrafted receiver Allen Lazard was on his way to breakout season before undergoing surgery on a core muscle; he's expected back soon.

The problem is the Packers haven't drafted or developed much offensive talent in recent years.

Wide receivers Marques Valdez-Scantling and Equanimeous St. Brown — drafted in the fifth- and sixth- rounds, respectively, in 2018 — have combined for 40 catches, 273 yards, and 1 touchdown this year.

Tight end Jace Sternberger and running back Dexter Williams, taken in the third- and sixth-rounds of the 2019 draft, have combined for a total of 96 yards from scrimmage in their careers.

The 2020 draft stands out the most. Of course, the Packers traded up to draft quarterback Jordan Love, likely to be Aaron Rodgers' eventual successor. Love hasn't played and isn't on track to play. Many, including Rodgers, thought the Packers would use their first-round pick to draft any of the talented wide receivers available in the first round. (Trading up also went against their team-building ethos).

They also drafted running back A.J. Dillon in the second round, who has just 97 yards on 23 carries this season. Tight end Josiah Deguara, selected in the third round, has one catch for 12 yards this season.

At the moment, the Packers are highly reliant on Adams and running back Aaron Jones, star offensive players who have been injured this year. The drafting and development have had only modest results recently.

What about the defense?

There weren't any reports of the Packers targeting defensive players at the trade deadline, but that side of the ball is arguably more in need of a talent injection.

The Packers rank 29th in Football Outsiders' defensive DVOA. They've had fewer defensive takeaways than all but two other teams.

In Week 8, they lost to the Minnesota Vikings, 28-22, in a game in which Vikings running back Dalvin Cook accumulated 226 yards from scrimmage and 4 touchdowns, routinely breaking tackles.

After the loss, former NFL cornerback Ryan Clark, former NFL quarterback Dean Orlovsky, and former head coach Rex Ryan all ripped the Packers' defense on ESPN's "Get Up," calling for them to acquire help.

Orlovsky called for the Packers to make two trades ahead of the deadline.

"I need a two-piece nugget. I don't just need a receiver; you need to go get me a linebacker, too," Orlovsky said. "Their linebackers are terrible in Green Bay."

The irony is the Packers actually went against their usual ways during the 2019 offseason and spent big money on linebackers. They signed Za'Darius Smith to a $66 million contract and Preston Smith to a $52 million contract. After strong 2019 seasons, both have taken a step back in 2020.

Will the Packers blow their window?

Graziano said on "Get Up" that the Packers felt the price for Fuller sacrificed their "big-picture view."

It's fair to question that view. Rodgers is having an MVP-level season, but he is 36 years old, and quarterbacks can decline without much warning. The decision to draft Love suggested the Packers feel the change at quarterback will happen soon — it seems unlikely that they would have Love sit for more than two seasons, at most.

Furthermore, the Packers have several key players hitting free agency next season and likely won't be able to retain all of them. Their window might be this year.

The NFC looks open this year. Contenders like the Tampa Bay Buccaneers, New Orleans Saints, and Seattle Seahawks all have major questions on their rosters. Perhaps the open nature of the conference convinced the Packers that their roster is good enough to win now.

"You absolutely blew the draft. Don't blow the opportunity to trade for somebody that can put you in that Super Bowl-caliber type team," Ryan said on ESPN. "Because you're not far off."

It's worth wondering if the Packers missed a chance to take definitive control of the conference.