MADRID — It took the former World Cup winner Ronaldo Luíz Nazário de Lima only weeks to realize that he would have to choose his words carefully now that he was a team owner.

A short time after he spent roughly $30 million to become majority owner of the Spanish first-division club Real Valladolid in September, and made that rarest of transitions for a player of his stature, Ronaldo turned up for a game at Real’s Estadio José Zorrilla. From the directors’ box, he watched as winger Keko fluffed a scoring chance with only the goalkeeper to beat.

Feeling he had something to offer, Ronaldo sought Keko out after the match. He told him to hold his nerve in such situations, to wait for the goalkeeper to make the first move.

“It’s easy to say when you’re Ronaldo,” came the reply.

“I stopped speaking,” Ronaldo said. “I will not tell them what I think anymore.

“For me, things were very easy.”

In a two-decade career that included scoring both goals in Brazil’s 2002 World Cup final victory, Ronaldo was a goal scoring phenom; a world player of the year at age 20, he made the name Ronaldo globally famous long before there even was a Cristiano Ronaldo.

His imprint on the current generation of stars is undeniable. He remains an idol for today’s generation of players, from Zlatan Ibrahimovic to Manchester United’s rugged midfielder Marouane Fellaini. England striker Harry Kane has said he regularly seeks out clips of Ronaldo, arguably soccer’s first icon of the internet age, to hone his own skills. 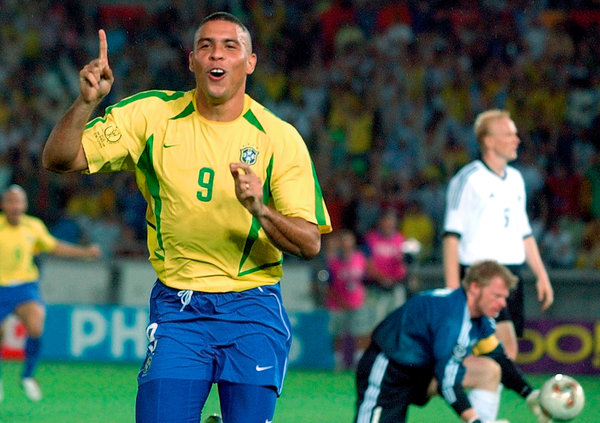 Ronaldo’s purchase of 90-year-old Valladolid this summer might also show them there is more to post-career work than coaching roles or television punditry.

“I think it’s beautiful if they do,” Ronaldo said last month of buying a club. “I hope that I start a moment to bring more player investment into football.”

Since the top players all now earn salaries larger than the profits of medium-sized companies, there are signs that they may follow the lead of Ronaldo and David Beckham, who heads a group that owns Inter Miami, the Major League Soccer franchise set to debut in 2020. Barcelona defender Gerard Piqué has set up a sports investment fund with his teammates Lionel Messi and Cesc Fàbregas; the three have known one another since they were boys in the club’s youth program.

“I talk to him about business; we still have to meet to discuss more,” Ronaldo, said of Piqué.

Ronaldo, 42 and a father of four, traces his own interest in business to his first days in soccer. Born into a poor family that lived in a two-room house in Bento Ribeiro, a working class suburb of Rio de Janeiro, he became the family’s principal breadwinner at 15, when he moved 200 miles north to sign his first professional contract with the Belo Horizonte-based club Cruzeiro. He made his professional debut as a 16-year-old.

“I was obligated to start very early to manage myself, to manage my money, to manage my family,” he said in an interview with The New York Times, his first since taking over Real Valladolid, in an office he has recently moved to on Madrid’s Calle Serrano.

The imposing boulevard, lined with designer stores, upmarket restaurants and some of the most expensive apartments in Spain, is about 5,000 miles from Bento Ribeiro. It might as well be another universe from the town where he learned the game, where poorly constructed cinder-block houses are tightly packed one against the other, and the idea of a luxury store would be considered fantasy.

The life soccer has afforded Ronaldo was unimaginable when he was growing up. Some of the stars he played with couldn’t cope with the riches they made in the game, he said, recalling several examples of former teammates who have lost fortunes and are once again living in poverty.

“I was afraid about that and decided to learn everything I could, do the best I could, have the best opinions in the marketing so I could better,” he said.

In addition to buying Valladolid, he is also setting up a business called Family Office Concierge R9 that will handle players’ financial affairs, so they can continue to profit from their careers into retirement. “We are trying to do for them what I did for me: Make sure they have a long life with all the money they’ve got,” he said.

Ronaldo said he had been curious about business from the days he was a gaptoothed teenager making life difficult for defenders unable to match his skill, his instincts and his pace. Business managers and sports marketing executives surrounded Ronaldo from his earliest days in Brazil and then in Europe, from his first steps at PSV Eindhoven in the Netherlands to his membership in Los Galacticos, the constellation of stars assembled at Real Madrid. He paid close attention to what they did, he said, especially executives at Nike, the American sporting goods colossus that continues to invest in his brand.

At Real Madrid, Ronaldo played alongside Beckham, Zinedine Zidane and Luis Figo in an era when the team’s president, Florentino Pérez, tried to build a squad that was both a championship team and a sports marketing machine.

Ronaldo’s Madrid teams failed to win the European game’s biggest prize, the Champions League, but they left an imprint of celebrity sizzle on the sport that endures.

“I think the world of marketing and money in football was changed because of that,” he said.

Since he stopped playing in 2011, Ronaldo has focused on self-improvement and building a diversified business empire. He was among the leaders of the committee that organized the 2014 World Cup in Brazil, working closely with several of the Brazilian soccer executives later charged with corruption by American investigators. (One of the men has been jailed in the United States, and two others still face charges; they deny the accusations against them, but Ronaldo offered his own verdict. “They did a horrible thing to football — they stole it from the people, ” Ronaldo said. “They stole the magic, the happiness.”)

Diving into business full time, he built a sports marketing company as part of a joint venture with the world’s largest advertising group, WPP. The business operated for four years, and then Ronaldo purchased the sports marketing company Octagon’s Brazil operation. Those endeavors led to a friendship with the WPP founder Martin Sorrell, who convinced him to try living in London. Ronaldo lived there for three years, learning English along the way.

He then moved to Madrid, where he lives with his girlfriend and is devoting most of his time to Valladolid, a club that Ronaldo’s personal brand and soccer standing significantly outshines.

The club, located 120 miles north of Madrid, has won only one major trophy — in the now defunct Spanish league cup in 1984. The immediate aim, Ronaldo said, is to stay in the top division and to continue rubbing shoulders with the likes of Barcelona and Real Madrid. The long-term goal is to prove himself as an owner who “can do football better.”

A wander around the satellite office in Madrid offers clues that much of the project remains in its infancy. A metal version of Valladolid’s crest is the only sign of decoration on the bare white walls in the entrance hall, while other rooms feature empty shelves and newly acquired chairs and desks waiting for occupants. Ronaldo himself sits at a desk with little more than a laptop and some stationery for his company.

He will not divulge many details of his plans for Valladolid, but there are signs that much of the focus will be on leveraging his fame and his links to Brazil so he can profit in the $6 billion player-transfer market. Within months of taking over, Ronaldo has almost tripled the number of scouts at Valladolid, to 15, and he says he is looking to add another six.

“There is a huge business in that, I think,” said Ronaldo, whose own transfer rights were first purchased for $7,500 in 1992 by two Rio businessmen. He is also planning to invest in Valladolid’s academy, to unearth and develop local talent.

And then there is Ronaldo himself. Though he now carries many more pounds on his sturdy frame than he did in his playing days, Ronaldo still possesses star power capable of stopping traffic in cities around the world. Smartphone-wielding fans continue to pester him for photographs with the same vigor they pursue the current generation of stars, and a documentary film crew has shadowed Ronaldo for a the past year, ahead of the launch of a big-budget film on his life.

Years after he stopped playing the game, he explained, his biggest strength — in business, at Real Valladolid and possibly one day in soccer governance — continues to be his own brand.

“I couldn’t be here without me,” he said.