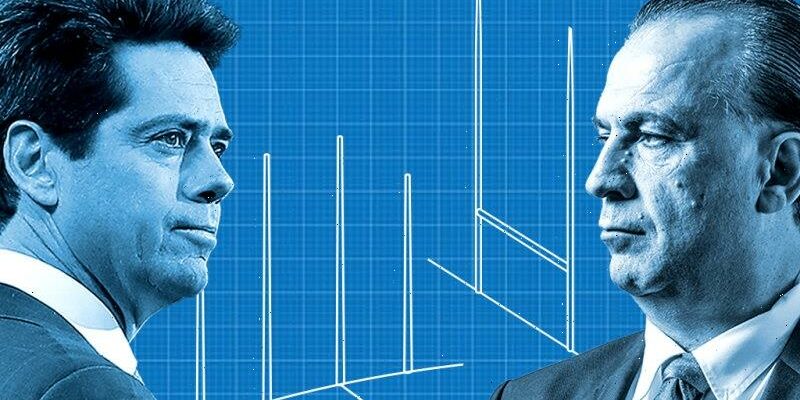 The NRL is Trump’s USA with his “America First” philosophy, while the AFL is China under the benign dictatorship of President Xi Jinping, pursuing an island-building expansionist policy, according to Hunter Fujak, author of Code Wars.

The NRL’s decision to create a 17th team, potentially weakening the other clubs, while the AFL stalls on the establishment of a 19th team in Tasmania, would seem at odds with the view of the Deakin University academic.

However, Fujak argues the strategy of both codes is consistent with the USA versus China analogy.

“The NRL, in creating a second Brisbane team, is placing all its strategic attention and resources into fortification of NSW and Queensland in particular, with the net outcome arguably at best being a hold position for the code,” he said.

“The AFL is being incredibly strategic because they have gotten away with not giving Tasmania a licence as long as they possibly could, thereby investing minimal resources to defend their heartland, compared to investing in northern markets, without costing them too many fans.”

So, the NRL’s fortification of south-east Queensland is akin to Trump’s Mexican wall, while the AFL’s $200m investment in the GWS Giants and Gold Coast Suns is similar to the Chinese Belt and Road Initiative. 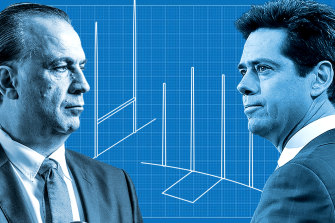 In other words, AFL boss Gill McLachlan is following the playbook of Sun Tzu, the 5th century BC military strategist who wrote The Art of War, while ARLC chair Peter V’landys is adopting the US Wild West ‘circle the wagons’ tactic.

Fujak points out Tasmania offers weak strategic or financial value to the AFL insofar as it already has the TV eyeballs of the island’s 550,000-strong population and only acted when Premier Peter Gutwein threatened to cut off all economic support to the code.

“Heartland fortification is the AFL’s absolute last resort, whereas it was the NRL’s first resort,” Fujak said.

The NRL/USA versus AFL/China analogy is not limited to expansion. 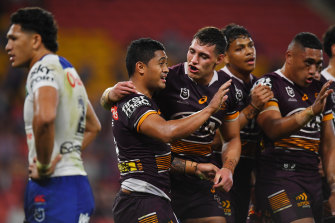 News Corp, owners of the Broncos, is fronting the cash to keep their soon-to-be Brisbane rivals afloat.Credit:Getty

“It spans the overall governance of the two codes and even their fan bases,” Fujak says.

He argues there is a residual progressives-versus-traditionalists divide in rugby league, similar to the schism in the USA between the red (Republican) and blue (Democrat) states. Perhaps this is a relic of the Super League war and, if so, V’landys’ dependence on News Corp money to finance the establishment of a second Brisbane team will reinforce this thesis. But most rugby league fans I know want to forget the Super League war.

Because the AFL is a home-grown game, it caters for all social classes with no inherent divide. It is easy to rule, like the homogenous population of mainland China. When the NSW Government announced plans to build two new Sydney stadiums, an outcry followed. The Victorian Government basically gifted the AFL a stadium at Docklands without a murmur.

V’landys patriotic cry, “An Australia without rugby league is not Australia”, together with his rushed rule changes evoke memories of Trump. However, the NRL administration better resembles the more stable government of Joe Biden. 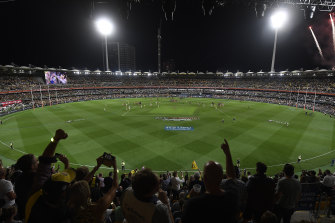 A refurbished Gabba, which hosted the 2020 AFL grand final, will be the venue for the 2032 Olympics opening ceremony in a gift to the 18-player game.Credit:Ian Hitchcock/AFL Photos

Successfully administering a code during COVID, while turning a $50m surplus, is not the chaos of Trump.

But the defining difference between the NRL/USA and AFL/China coupling is strategic direction. The NRL’s fortification of south-east Queensland won’t stop the AFL from progressing its ambition to dominate the state.

The Opening Ceremony of the 2032 Olympics will be held in a renovated Gabba, a gift from the Australian taxpayer and the IOC to the AFL.

Furthermore, as Fujak points out, the AFL arguably already has two teams in Brisbane- the Lions men and the 2021 AFLW premiership-winning women who will soon be playing their home games at a $70m centre being built in Ipswich.

Meanwhile, in Sydney, stadia plans change depending on whoever is influential in government. John Barilaro has resigned as Deputy Premier. He was the strongest supporter of the five suburban boutique stadia plan favoured by V’landys. The money was originally pledged to “rectangularising” the Olympic stadium at Homebush into a big arena suitable for world-class rugby league, union and soccer matches, a vision shared by those members of government who want to attract major international events to Sydney.

The Homebush and Moore Park stadiums are now ruled by a single board chaired by Tony Shepherd, who is also chair of the GWS Giants.

Should the Homebush stadium remain in its current AFL-friendly shape, it would suit the AFL’s long-term plans. Very strategic. Very President Xi.