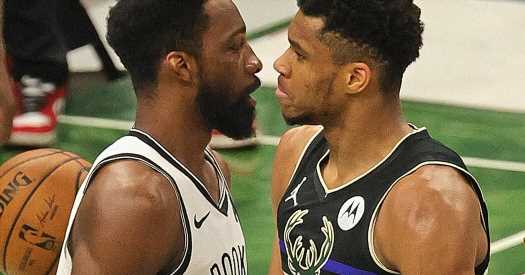 The Milwaukee Bucks looked wobbly for a moment in the fourth quarter of Thursday’s Game 6 against the Nets. A 15-point lead had been cut to 5 in a matter of minutes. Kevin Durant, coming off a marvelous Game 5 performance, looked primed for a repeat after scoring 12 third quarter points. Milwaukee’s offense was stagnant.

But the Bucks’ top trio responded in a decisive and rather undramatic stretch. Khris Middleton was fouled shooting a 3-pointer and hit all three free throws. Jrue Holiday drove for a layup. Giannis Antetokounmpo hit two free throws, followed by an emphatic “and-1” to push the lead to back to 15.

That stretch saved the season for the Bucks, sealed a 104-89 victory in Milwaukee and forced a winner-take-all Game 7 in Brooklyn on Saturday. It was a microcosm of the Bucks at their best: Middleton creating offense from the perimeter. Holiday being able to break down a defense. Antetokounmpo being unguardable near the rim. And the team defense not allowing easy baskets for the Nets. This was the kind of basketball that has been hard to come by for Milwaukee in this series, and it came at a necessary time.

“They responded after every run we made,” Durant said after the game.

On Middleton, Nets coach Steve Nash said, “We just kind of let him out of the bag tonight.”

When the team needed its stars, they responded from the start. The Bucks attacked the rim relentlessly from tipoff. Antetokounmpo, who has faced withering criticism for his penchant for taking too many jump shots, did not take a single 3-pointer the whole game. In one play, he went up for a jump shot, changed his mind midair and tossed it out to Middleton for an open 3.

“I think there were was maybe one or two plays where I was open on the 3-point line that I could shoot it, but I still felt like I could go downhill. But you know, this game I didn’t shoot a 3,” Antetokounmpo said. “Maybe the next game I’ll shoot a couple. I don’t know how it’s going to go. I can’t predict the future. But what I know is that I enjoy the game when I’m aggressive.”

He set the tone, scoring 11 points and grabbing seven rebounds in the opening quarter. The Bucks also put the Nets on their heels by pushing the ball in transition, often thanks to Antetokounmpo doing so himself. Milwaukee had 26 fast break points, compared to the Nets’ 4. The Bucks shot only 7 for 33 from deep (21.2 percent). They did their damage at the rim, a place where the Nets defense has been vulnerable all season.

What has been seemingly lost in this series, particularly in the wake of Durant’s record-setting Game 5 performance, is that Antetokounmpo, for all his faults, is having an excellent series, one of the best of his career. He has reached 30 points in five of the six games. He is averaging 30.5 points and 12.8 rebounds a game on 56.5 percent shooting, all while the Nets defense has been designed specifically to get him away from the rim. More often than not, Antetokounmpo has been able to get to his spot regardless. And on Thursday, the Bucks did a better job of getting Antetokounmpo the ball on the move rather than with him standing in one place.

It’s easy to focus on the missed jump shots, but technically, there haven’t been many. It’s just that the misses look terrible and are easy to fixate on.

“Giannis, coming into the game, was in a good place,” Bucks coach Mike Budenholzer said, adding that the team tried to get him into “multiple actions,” and to “just get him where he’s attacking, creating for his teammates and creating for himself.”

The home team has won every game in this series, which bodes well for the Nets in Game 7. However, there are also some signs that may favor Milwaukee heading into the concluding game. For one thing, the Nets have been held below 100 points in three of the last four games — the three Milwaukee wins. Durant scored 32 points in Game 6, but it took him 30 shots to do it. He was only 2 for 8 from 3, and missed both of his free throws.

By most other N.B.A. player’s standards, it was a productive game. But for Durant, that statline is him being contained — a plus for Milwaukee. The Bucks were able to slow the game down enough to force Durant into more isolations and difficult shots.

Of course, the Bucks benefited from a hobbled James Harden, who was still clearly struggling with his hamstring strain on Thursday. He still managed to score 16 points and dish out seven assists, but his ability to accelerate seemed hampered, allowing Milwaukee to put more pressure on Durant.

“We’re not expecting too much from him movement wise, but he’s going out there and giving it his all. And we respect that,” Durant said, referring to Harden.

It didn’t help the Nets that usually reliable role players, like Joe Harris and Jeff Green, struggled with their shooting as well. 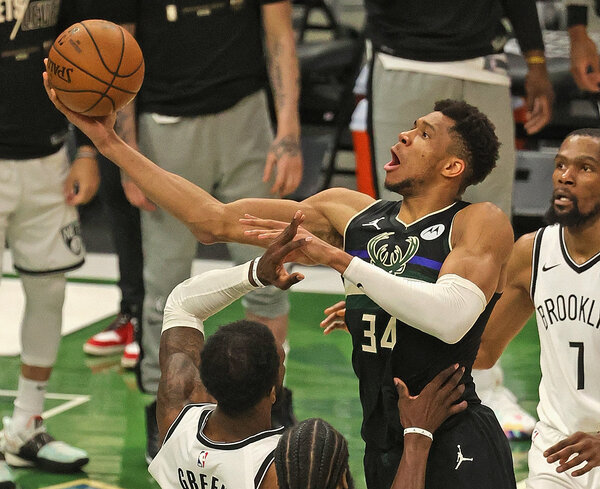 This will be Antetokounmpo and Middleton’s second Game 7 in their careers. The last one was a loss against the Boston Celtics in the first round of their 2018 series. Durant has played in four of them, the most recent one being the 2018 Western Conference finals with the Golden State Warriors against his now teammate, James Harden, who was then with the Houston Rockets. Durant has won three of those deciding games. His best performance came in a 2011 semifinal series against the Memphis Grizzlies, when he dropped 39 points. Harden was his teammate then on the Oklahoma City Thunder.

Whoever wins Game 7 is likely to be favored to head to the championship over either the Atlanta Hawks or the Philadelphia 76ers. If the Bucks can’t win their first road game of the series, it will be yet another playoff disappointment for Milwaukee, and Budenholzer could be dismissed. There will be questions — once again — about whether Antetokounmpo can be the best player on a championship team. If the Nets lose, injuries or not, it will be a missed opportunity that the franchise mortgaged its future for.

It was Harden who might have provided the elixir for either team wanting to break through and advance: “We’ve just got to go out there and hoop.”