When Michael Clarke spoke about playing "tough Australian cricket", it's doubtful he would have had in mind what Usman Khawaja must be going through now.

There has been much navel-gazing recently about what it means to be an Australian Test cricketer. 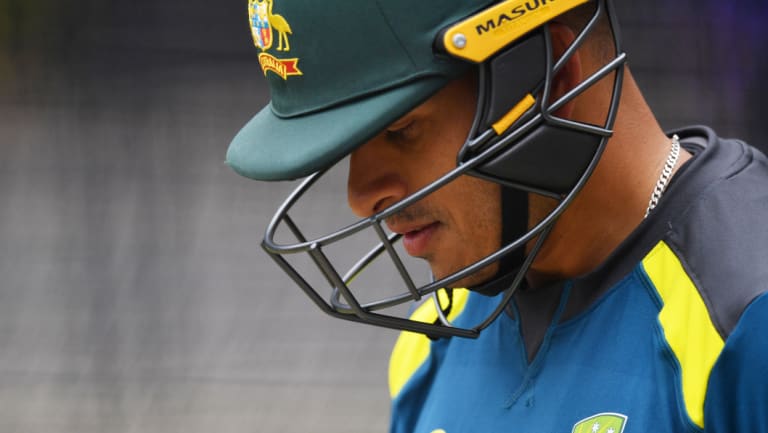 Ultimate pro: Usman Khawaja during a nets session at the Adelaide Oval. Credit:AAP

Australia's leaders have had a crack at defining it with their players' pact. On Tuesday, Khawaja embodied it.

Earlier that morning, his brother Arsalan Khawaja, 39, was taken to Parramatta police station for his alleged involvement in a fake terror plot to kill former prime minister Malcolm Turnbull and his former deputy Julie Bishop.

Police are alleging he had framed his colleague Mohamed Kamer Nilar Nizamdeen due to a "personal grievance" over a woman. Nizamdeen spent four weeks in solitary confinement in Goulburn Supermax prison.

Khawaja's brother has been charged with attempting to pervert justice, and forgery, by making a false document.

Those who know Khawaja speak of his calm and measured temperament. He was no different here, according to those present.

As the news broke, Khawaja was in the midst of Australia's main session before the first Test. It's not inconceivable fans watching the session already knew.

Worried he would be told by a member of the public, a Cricket Australia staff member informed him just after he had completed a hit in the nets.

The Australian squad did not know until after training. Mitchell Marsh was the first to be told to prepare him for his media duties.

Khawaja learned initially of the issue as he was flying back from the Test tour of the UAE, where he starred.

Even though this story has been bubbling for weeks now, it can't have been easy to learn that your older brother, presumably someone you have looked up to your whole life, has been arrested and charged with such offences.

Pictures of his brother in handcuffs were doing the rounds by the afternoon, so too footage of his father, Tariq, accompanying Arsalan to pay a $50,000 surety for his bail.

Those who know Khawaja speak of his calm and measured temperament. He was no different here, according to those present.

For him, it was business as usual. He threw balls to coaching consultant Sridharan Sriram as part of a fielding drill for Marcus Harris, even seeing the funny side after "bowling" him with a throw, then took catches himself.

As the session wound down, Khawaja padded up again for a final hit. Whatever angst he may have been feeling inside, he hid well.

The scores of fans for whom he signed autographs and posed with for selfies would undoubtedly be thinking even more highly of him after they discovered what their hero was going through.

Aware of the likelihood of an impending media circus, CA's media team advised Khawaja to make a public statement so he would not have cameras following his every move.

The consummate team man, he attacked the issue head on.

"It's a matter for the police to deal with. Out of respect for the process, it'd be inappropriate for me to make any further comments," Khawaja said in a short statement.

"I just ask you to please respect my privacy and my family's privacy during this time. Thank you."

That he spoke at all speaks volumes about Khawaja's character. You want a tough Australian cricketer? Look no further.