Matt Temple is bringing his blue-collar work ethic to the pool. The 20-year-old has a habit of finishing what he starts, which would equate to a prized spot on the Dolphins squad at next year's Olympic Games in Tokyo.

Few could accuse Temple of doing things the easy way. The Victorian was never a junior star and made his international debut at the recent FINA World Championships in Korea, finishing sixth in the final of a blistering 100 metre butterfly in which US star Caeleb Dressel smashed the world record of the great Michael Phelps. 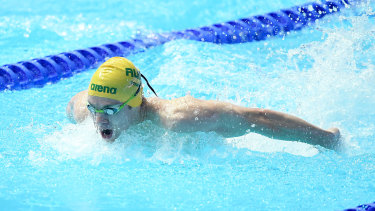 He works in a scaffold yard by day and fits in training at Nunawading at both ends of his shifts. Temple concedes it has its challenges, especially when many of his higher-profile Dolphins squadmates are able to train full-time, but it fits nicely with the way he approaches his business above the black line.

While many of his mates were giving the sport away in their late teens, Temple stuck solid, convinced he had more to give despite failing to crack a national squad. He gave himself a year at Nunawading under coach Scott Talbot and the results spoke for themselves.

"I’m just a very driven person in general. I like to get things finished and done. I moved to Nunawading for a year and wanted to give it a good crack," Temple said. "I just kept improving and it made me realise where I sit compared to everyone else in Victoria and Australia. I just wanted to be better than everyone else.

"Blue collar … that’s a good description of me. If there’s something I want to set out to do, I'll do my best to finish it." 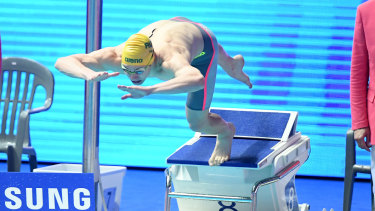 Most of the top-shelf Australians are overseas competing in the new International Swim League, a professional series that has disrupted the sport and given them a capacity to earn some income outside of the FINA bubble.

Temple remains at home preparing for the Australian Short Course Championships, which start in Melbourne on Thursday. He doesn't love the format but concedes it might well suit him better than the 50m environment.

"I think I’m better at shortcourse… I don’t really like it but my turns are one of my fastest movements in the pool. That’s an advantage."

Temple won a gold in Korea as part of the mixed medley relay, which has been added to the Olympic rotation for the first time in Tokyo. He will be an even better swimmer by then after admitting to being a touch star-struck in Korea… by his own teammates.

"I roomed with Kyle (Chalmers) in Cairns… he’s a top bloke. He showed me around and maybe I would have struggled without him. Just to meet the people you idolise and look up to in the pool… now I can walk around and say hi to them and have a chat to them. No issues."

The Australian Short Course Championships run from October 24-26 at the Melbourne Sports and Aquatic Centre.