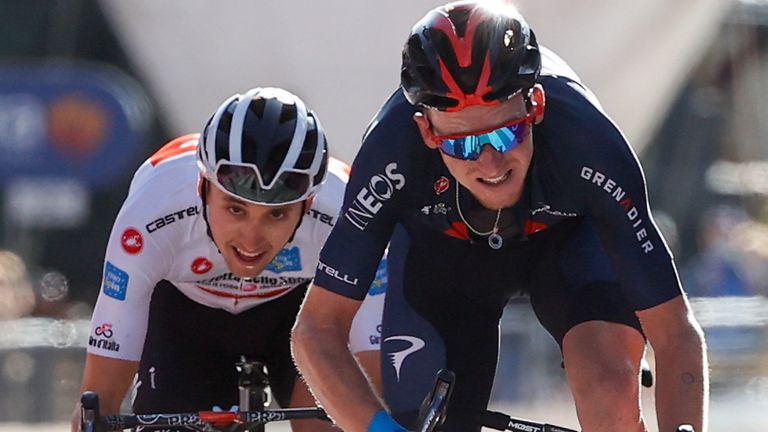 Tao Geoghegan Hart moved into a strong position to win the Giro d’Italia after claiming his second stage win in Sestriere.

The 25-year-old Londoner pipped his closest rival Jai Hindley over the line and will start Sunday’s final individual time trial with the same time as his Australian rival.

Hindley did just enough to take the race leader’s maglia rosa from his Team Sunweb team-mate Wilco Kelderman, who had started the day with a 12-second lead but fell away on the penultimate lap of a belatedly revised stage.

Pushed along by his Ineos Grenadiers team-mate Rohan Dennis, who had relentlessly worked to split the leading contenders, Geoghegan Hart repelled a series of attempted breaks by Hindley before bursting over the line to claim the 10-second winner’s bonus.

Geoghegan Hart, who out-performed Hindley by more than a minute in the previous time trial on stage 14, is now favourite to become the latest and arguably most unlikely British winner of a grand tour.

He said: “I’m very happy for myself, for my team and for the Giro – today was a beautiful day.

“Tomorrow’s time trial will be a matter of legs, the route is short, I hope to have a good day and a bit of luck, then we will see.” 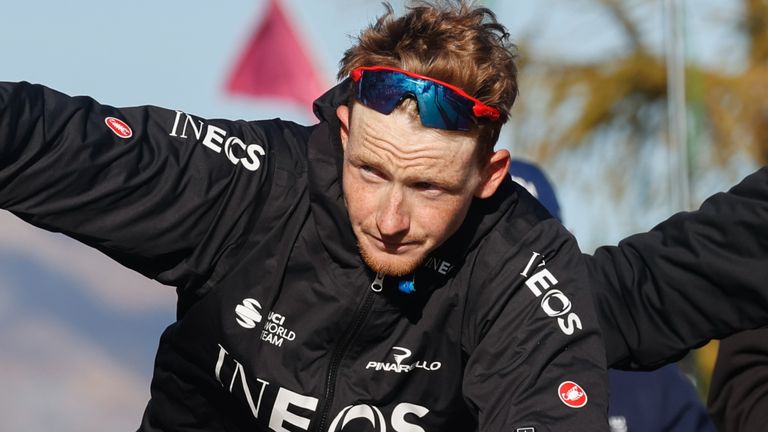 It was another breath-taking day in the mountains as two riders who started the Giro as domestiques for bigger names in their respective teams came to the fore in exciting fashion.

Geoghegan Hart had been expected to support Geraint Thomas prior to his injury early in the tour, while Hindley had still been overshadowed by Kelderman until the moment the Dutchman’s spirit was broken.

Italy’s Davide Ballerini had made the first solo break early in the stage but the decisive moment came when Dennis engineered an attack on the penultimate climb which left the likes of Kelderman, Vincenzo Nibali and Joao Almeida
trailing.

Colombian Einer Rubio was first to the top of the mountain for the second time but lost ground on the subsequent flat phase and was caught by the group containing the maglia rosa contenders just under 10km from the line.

It set the scene for a thrilling finale in which Hindley, acutely aware of his relative limitations in the time trial, repeatedly tried to break clear of Geoghegan Hart and establish an advantage, only to be denied.

Hindley said: “Incredible, I have no words. From an early age I dreamed of wearing the Maglia Rosa, it’s a huge honour for me and I still don’t believe it. Tomorrow I’ll give my best in ITT.”

Nevertheless it is Geoghegan Hart who will start as the unlikely favourite to win the Giro over the 15.7km course from Cernusco sul Naviglio to Milan on Sunday.