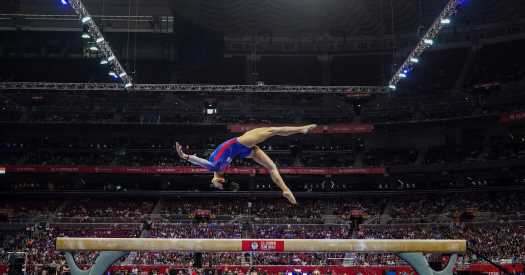 At the U.S. Olympic gymnastics trials in St. Louis, the athletes vying for places on the team tested the limits of their ability, and of gravity.

If the United States Olympic gymnastics trials proved anything, it was that the arena ceiling at the Tokyo Games had better be high. There will be fast-flying flips and tornado-like twists that will need as much air as they can get.

Gymnasts will unleash their most daring routines in an attempt to win a gold medal, and the margin for error will be narrow — even narrower than the 4-inch balance beam that many gymnasts already find precarious. One slip. One extra step on a landing. One fall. Seemingly tiny mistakes could mean the difference between making it to a final, or winning a medal, in every one of the events.

Of course, Simone Biles has a much bigger cushion. Her routines are so complex and challenging that she can win even with big mistakes. She is the world’s most decorated gymnast, with four Olympic golds already and 25 world championship medals, and it’s a safe bet she’ll need to make room for more. At 24, she could walk away from the Tokyo Games, likely her last big event before retiring at the top of her sport, with five more gold medals.

Sunisa Lee and Simone Biles, above, are the top two gymnasts on the top gymnastics team in the world, one that will most likely dominate the Tokyo Games. The United States women are looking to win a third consecutive Olympic gold medal for their team, and are the heavy favorites to do it. 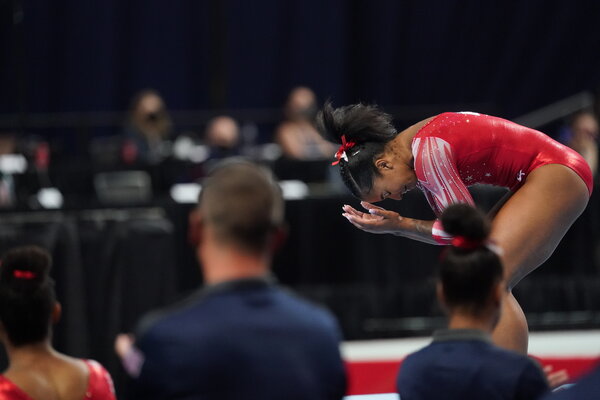 Three years ago, Jordan Chiles nearly quit gymnastics, frustrated about not making world championship teams and exhausted after years under a coach she says mistreated her. And then Chiles, above, started training with Biles and turned her career around.

Chiles, Biles, Lee and Grace McCallum will compete for the team gold for the United States. Two other gymnasts, Jade Carey and MyKayla Skinner, were named to the Olympic team as individual competitors who will serve as event specialists.

The U.S. men’s team has finished fifth at the last two Olympics and it will be a challenge for them to find a way onto the medals podium in the team event this time. But they will try, and they will be fun to watch. Their team cheerleader is Yul Moldauer, below, the squad’s self-described hype man whose enthusiastic celebrations punctuate his high-flying gymnastics.

The men’s team’s inspirational veteran is the three-time Olympian Sam Mikulak, above, a six-time national champion who is retiring this year.