Nathan Lyon was rightly named the player of the match in the Second Test victory for his unlikely wicket taking – not unlikely in the sense that he wasn’t bowling well, unlikely in as much as the Perth Stadium surface (the new pitch played as much like the WACA as the actual WACA) doesn’t offer much in the realm of spin, a characteristic by which spinners generally define their jobs.

Lyon’s battle with Virat Kohli was every bit as compelling as Abdul Qadir versus Kim Hughes, Shane Warne versus Hansie Cronje or Darren Lehmann and Damien Martyn versus Muttiah Muralitharan at Galle. Nathan’s gutsy batting and unrelenting, wholehearted fielding effort set an example for teammates and aspirants alike. He was the outstanding man of the 22, but individuals alone do not win team games, and Test cricket is said to be "saved by batsmen and won by bowlers". 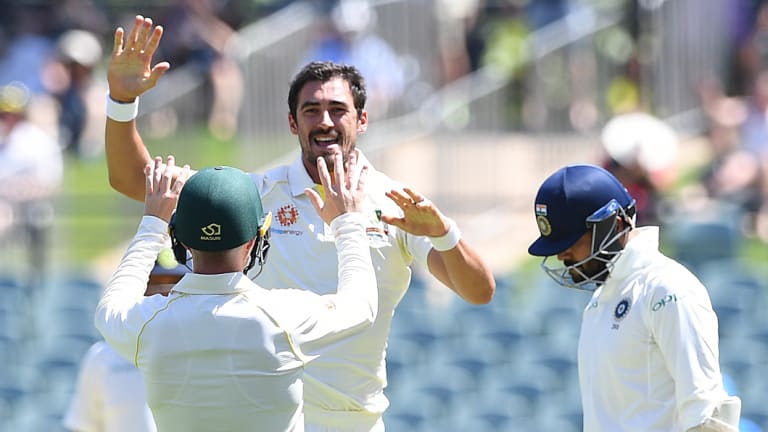 Fall guy: Mitchell Starc copped plenty of blame for the first Test loss, but his figures didn’t justify the scrutiny.Credit:AAP

Without taking 20 wickets the series could not be levelled. Australia needed its four-man attack to collectively do their jobs and it needed the fieldsman to take their catches. The win was difficult, gritty and gutsy, lacking in superstars and reeking of "team" – well done them, one and all. India’s principle weakness may be that they are relying on too few of their XI. The Australians lifted after Adelaide, the off-spinner maintained his own world’s best standards but the tall, left-handed strike bowler lead the rise.

Mitchell Starc plied his fire with craft and skill, without undue fuss or excess vocabulary at 145km/h. At times he touched 150km/h especially when he went around the wicket and the body coiled a few degrees more and rotated with just a hint more explosion. He exuded intense purpose, and Test cricket requires intensity, as it requires physical and mental resilience. Something his critics should know.

Sustaining intensity over 80 or so overs comes at a price. Starc has had his share of injuries and it was feared that his foot stress fracture may have distracted him during the First Test. Bowlers need healthy feet like batsmen need willow. His greatest critic was answered in muted, internal tones. He had a look in the mirror, a good chat with himself, did extra work leading up to the game by concentrating on centre wicket training, a much more helpful site than the claustrophobic and unrealistic nets. He ironed out some creases rather than pressed the whole suit – he answered himself. Mitchell responded as his teammates needed and was a part of a significant win.

There were five Sheffield matches before the start of the series and Starc only played one of those on instructions from Cricket Austraalia's high performance managers – the head of that department is now no longer working for any cricket organisation. Bowlers need to bowl, it's a function of both skill and physicality and sometimes the notion of "work loads" is not just misinterpreted but largely misunderstood. "Resting" is fine if you are exhausted or carrying a serious niggle, otherwise the body has to be toughened for long outings over consecutive days and then again for successive Tests with short recovery times. 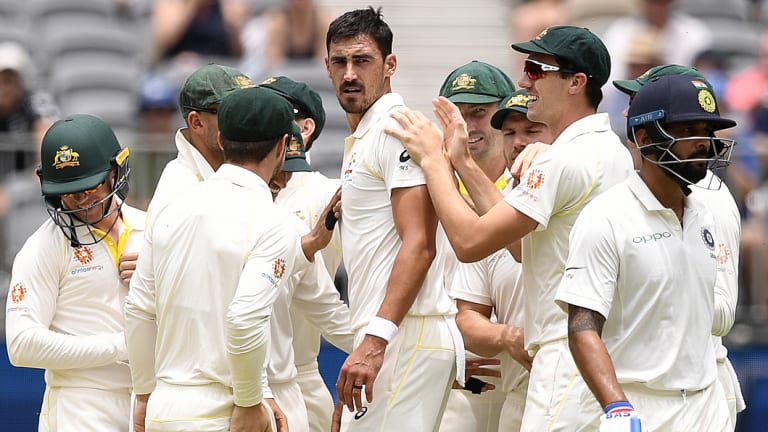 Level-headed: Criticism of Starc backed off in Perth, but he was impervious to both scrutiny and praise.Credit:AAP

The clue to the contest is in the title – a "Test" of all the faculties over five days, and further over the breadth of a series. No amount of gym work or plyometrics will increase a skill level. Professional golfers hit golf balls, tennis players hit tennis balls and snooker players don’t lift weights. Skill acquisition and maintenance has taken a secondary role with some cricket coaching staff (which may be part of the explanation for the shallow depth of Australia’s elite at the present time).

While Pat Cummins and Josh Hazlewood played two matches (and worked hard on docile pitches) in the Futures League competition Mitchell Starc cooled his jets in the nets and then was called up for 20-over international cricket. Rest and low work loads were deemed more important than hardening up. Underdone going into the First Test? Maybe, but a couple of untidy overs across five days hardly called for a replacement. If there were two leg-spinners in the team and only one was considered necessary I could see why a lack of consistency could cost a Test bowler his spot.

When the media demean with little objectivity the response from athletes is disdain no matter the identity of that particular form of media.

In professional sport you are either going backwards or forwards, there is no time or place to stand still. Inertia is paralysing, opponents run over you, pretenders take your place. Starc has not worried about losing, he has worked at getting better – that is the only response that brings progress.

His return at Adelaide was 5-103 off 40.5, better than respectable but his team lost by a squeak. In Perth he took 5-125 in one ball more than Adelaide. The numbers are telling us that of the fast bowlers in the First Test he was the best by average, and his individual average was better than the team average – but I could cite "lies, damn lies and statistics" for any argument. To blame him for the loss was like blaming the freezing point of water for sinking the Titanic , or perhaps chastising a wrist spinner from bowling the odd long hop or full toss.

Mitchell must have read the works of legendary UCLA Basketball Coach John Wooden who said "You cannot let praise or criticism get to you. It is weakness to get caught up in either one".

There’s been no weakness from Mitchell Starc.