Sri Lanka's wretched tour took a nasty turn with star opener Dimuth Karunaratne rushed to hospital after being felled by a bouncer, as Australia continued their domination of the series on Saturday.

He was later cleared of injury and discharged on Saturday night, though it’s unclear if he will be fit to play out the game.

A hush descended upon the sell-out crowd in Canberra as Karunaratne was tended to by medical staff from both teams and paramedics after being struck on the neck by a short ball from speedster Pat Cummins. Karunaratne fell to the ground immediately, almost dropping his bat onto the stumps. 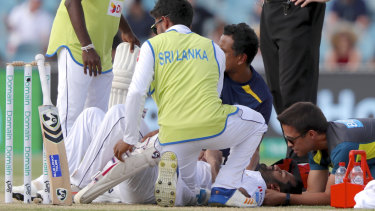 Play was stopped for about 12 minutes as the injured batsman received treatment on the field before being placed on a stretcher and taken off the playing arena on a medicab. It's understood he did not lose consciousness but complained of pain in his neck and tingling to his hands.

He was then taken by ambulance to hospital for further assessment, accompanied by the Sri Lanka  team manager, while his father and sister are believed to have travelled in a separate car.

"It was a bit scary at the start, the way he fell back initially," Sri Lanka coach Chandika Hathurusingha said.

It would have been an eerie feeling for the Australian team, several of whom were involved in the game where Phillip Hughes was fatally wounded in 2014.

Only 24 hours earlier, Travis Head choked back tears in a post-match interview in which he revealed he had dedicated his maiden Test century to Hughes, his former South Australia teammate.

Cummins appeared shaken by the incident and checked in on his opponent as he left the field. He did, however, continue bowling and delivered a bouncer shortly after.

"It's never a nice feeling seeing someone go down like that. It was a good thing he looked like he was moving his hands and the physio said he seemed alright when he left," Cummins said on Fox Sports after play. "I wish him all the best and I hope he's doing alright."

Earlier in the session, Lahiru Thirimanne was struck on his right hand by a delivery from Jhye Richardson. Thirimanne was in discomfort but played on after being given a spray to numb the blow. 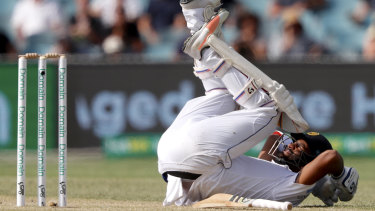 Down: Karunaratne falls after being struck.Credit:AAP

Sri Lanka's campaign has already been crippled by injury with pacemen Nuwan Pradeep, Suranga Lakmal, Lahiru Kumara and Dushmantha Chameera all breaking down in Australia.

It was Patterson's first Test century and continues his rich vein of form against Sri Lanka. The 25-year-old has made 403 runs and been dismissed only once in three games in as many weeks.

Like Burns, who was also brought into the team for this series, Patterson is now well placed to book a seat on the plane to England for the Ashes.

Sri Lanka reached 3-123 at stumps on the second day, in reply to Australia's epic first innings of 5d-534.

Sri Lanka's opening pair had appeared generally comfortable against the Australian attack in an 82-run stand but Karunaratne's departure was a turning point.

They lost three wickets in the final hour of the day, including the key scalp of Kusal Mendis, who was bowled by a gem from Cummins for six.

Cummins was again the pick of the bowlers on a pitch that has yielded only four wickets on the second day.

There were encouraging signs for Mitchell Starc, who has come under intense criticism after an underwhelming season.

The left-arm quick bowled with extreme pace, hitting a peak of 154 km/h in his first spell, though was unable to strike with the new ball.

He was a touch expensive early as he attacked the stumps but broke through on the shadow of stumps when he induced a false stroke from Dinesh Chandimal with a well-directed 148 km/h bumper.

"I personally think he bowls better when the pitch is really flat, and the ball gets old and he can run in and let them go," Michael Hussey said on Fox Sports.

"He looked really dangerous, that was a handy wicket late in the day."