SAN ANTONIO — Derrick White scored a career-high 26 points and the San Antonio Spurs rallied in the fourth quarter to beat the Nets, 117-114, on Thursday night.

It was the Spurs’ 16th consecutive win at home over the Nets, whose last win in San Antonio was on Jan. 22, 2002, when the team was based in New Jersey and San Antonio played at the Alamodome.

Fresh off his seventh All-Star selection, LaMarcus Aldridge had 20 points, including a critical three-point play in the final minute, and 13 rebounds for the Spurs. DeMar DeRozan added 15 points and 10 rebounds in his return from a three-game absence because of a sore left knee.

After failing to make the All-Star Game as a reserve, D’Angelo Russell of the Nets pressed his case to replace the injured Victor Oladipo. Russell had 25 points, 9 assists and 4 turnovers in 33 minutes.

The Nets eclipsed 100 points for the 12th straight game even without the injured Spencer Dinwiddie, their third-leading scorer. They shot 47 percent from the field and had 30 assists, four less than their season high. Dinwiddie missed his fourth straight game with torn ligaments in his right thumb.

Joe Harris and DeMarre Carroll had 18 points each for the Nets, who had won seven of eight coming in. They erased a 12-point deficit in the first half and led, 97-90, with eight minutes remaining before San Antonio rallied.

Aldridge’s three-point play after a foul on his own follow-up shot put the Spurs ahead by 115-111 with 51.1 seconds remaining. Aldridge added two free throws with 3.6 seconds left, and Shabazz Napier missed a 26-footer at the buzzer that would have tied the game. 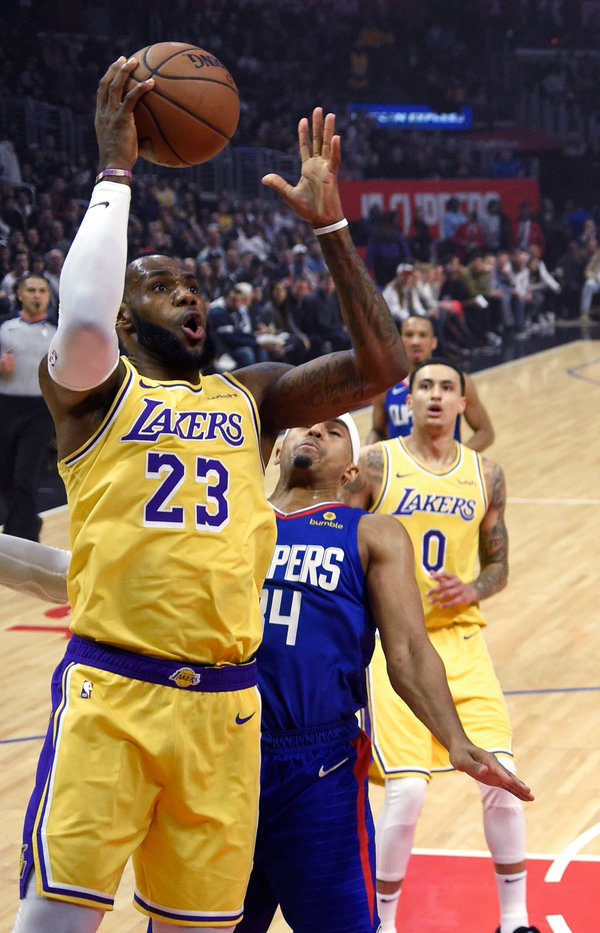 JAMES RETURNS LeBron James returned to the Los Angeles Lakers’ lineup after the longest injury-related absence of his 16-year career.

James played against the Los Angeles Clippers after missing 17 games. He played 16 minutes in the first half, totaling 5 points, 5 rebounds and 4 assists.

Lakers Coach Luke Walton said James would not be on a minutes restriction, but would be closely watched. The team was 6-11 since James strained his left groin on Dec. 25 against Golden State.

Kyle Kuzma (left hip strain) and Josh Hart (left knee tendinitis) also returned to the Lakers, who got Rajon Rondo back last week. He was also hurt in the Christmas win over the Warriors.

They remain without Lonzo Ball, who has an ankle sprain that will keep him out until at least late February.