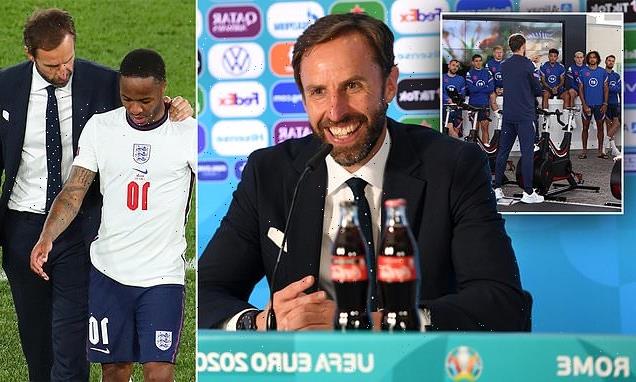 MARTIN SAMUEL: Gareth Southgate is the best thing to happen to English football in decades… He’s the man for his time and place who keeps getting the big calls right. He’s the DUDE

And the wonderful thing is, it really couldn’t happen to a better bloke.

Not nicer, because that buys into the narrative of Gareth Southgate as Mr Nice Guy, the yes man, the company man, all things to all men, and he’s certainly not that.

What he is, however, is a good man, because he’s dead straight, and he’s responsible and he’s sensible and he thinks about the picture wider than his own. 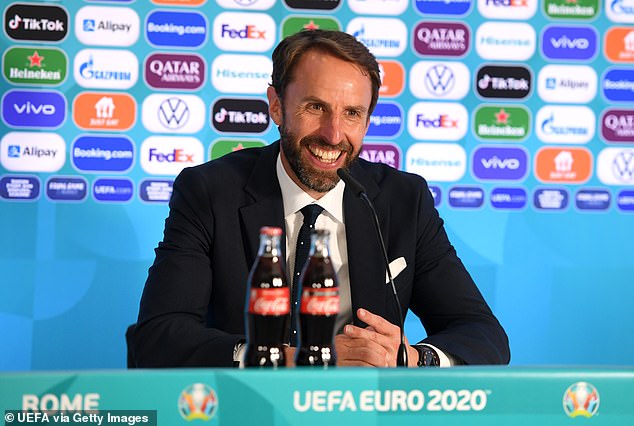 And he’s also the best man because of what his success – and it is success, because the last manager to take England this far in consecutive major tournaments was Sir Alf Ramsey in 1968 – says about English football.

Namely, that the manager should be from here, with an understanding of this country’s football culture, and if that means appointing a young coach, or a coach who hasn’t had the career of Pep Guardiola, then we shouldn’t be afraid as long as he’s the right man.

Southgate is, quite simply, the best thing to happen to English football in decades. And guess what? He knows more about it than you, or me, or the 60million England managers out there questioning his every judgment call. He’s got so much more right than he’s got wrong. 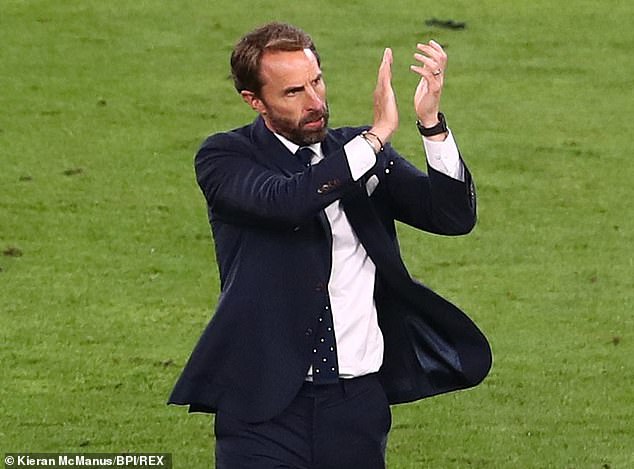 There is a scene in 24 Hour Party People, Michael Winterbottom’s film about Factory Records, in which Steve Coogan, as owner Tony Wilson, narrates the way the Hacienda nightclub changed Britain’s popular culture.

‘Suddenly, everything came together. The music, the venue, the dancing, the city. I was proved right – Manchester was like renaissance Florence.

‘Mike Pickering was right – you don’t need bands in a club. Shaun Ryder was right, New Order were right. We all came together. Everyone came to the Hacienda. It was our cathedral.’ 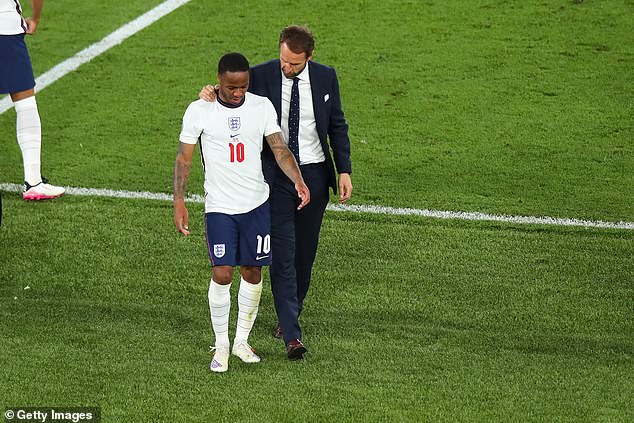 His squad is built on the cornerstones of men who have been doubted, like Raheem Sterling (L)

He was right about three at the back, about guarding midfielders, about not resting players on yellow cards, about taking the knee, about reconnecting with the country, about discipline.

On all of these topics, and a hundred tiny ones that may seem irrelevant but are not, he was the voice of reason and insight. He just gets it. And he has from the start.

Southgate treats players like adults, and they make adult decisions in response. This is his way.

It is why he promotes youth faster than any predecessor, while maintaining a core of seniors who have his unswerving support. Kane, Maguire, Raheem Sterling, even Jordan Henderson, this squad is built on the cornerstones of men who have been doubted without, but never within.

‘In any team there’s a group that drive and I don’t think you can underestimate their importance,’ Southgate said. ‘When challenges are made, when there’s a need to dig in, when things are happening around the camp, that core group is key.

‘The lads who were with us in Russia, like Kieran Trippier, like Jordan Pickford, they’ve been through these experiences together and pass that on to the younger group like tribal elders.

‘It’s not just about talent. Team building is so much more: relationships and the strength of those bonds. We talked in the autumn about how that group had allowed a younger group to come in and have a profile.

‘The newer players recognise that and appreciate the way those older guys made them feel welcome. I loved some of the reaction on the bench when Jordan scored last night, because you could see the younger players were delighted for him.

‘There’s a lovely moment with Jude Bellingham, that shows you what Jordan brings to our environment. He’s really accepted that this was going to be a difficult and different challenge but he’s totally thrown himself into it.

‘When I spoke with him a few weeks ahead of the first training camp, we talked through this scenario, and he was adamant he just wanted to be part of it and to contribute in any way he could. It’s brilliant for him he’s had a moment like Saturday night. He’s been crucial around the camp with what we’re doing.’

Team building is about relationships, as the man said. So let’s get straight into it. The knee.

Does anyone seriously believe the team spirit that everyone is focusing on would have been possible had Southgate not supported his players over their gesture of anti-racism?

If Southgate had told the black players targeted in Bulgaria and Montenegro – as well as on social media at home – that they did not have his backing because it was too problematic?

If he had told the white players who supported their team-mates just to focus on football? Could it have worked as it has done? Of course not. So here was leadership; here was principle. 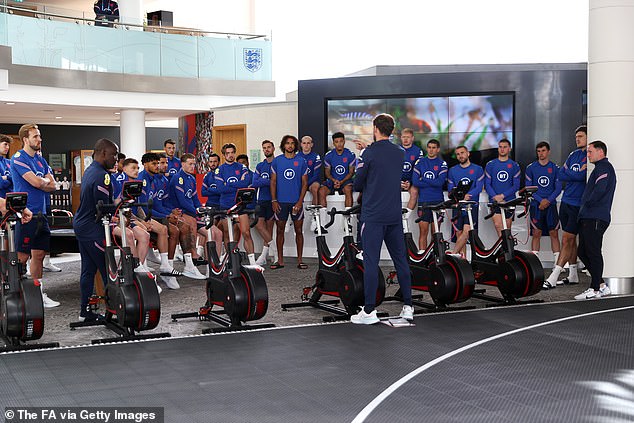 Because Southgate treats all his players like adults, they then make adult decisions in return

‘You’re on the losing side,’ Southgate wrote in an open letter to those who boo, jeer and abuse on social media. And he was right about that, too.

Those who still refuse to watch England because the players stand against racism are missing out. Those who deliberately conflate a support for tolerance with extremism have missed the point.

Southgate knew. Outside England’s hotel, Rockliffe Hall, before the match with Croatia he sat talking with the senior members of his team about what to do.

The players all knew they wanted to take the knee, but the discussion focused on the next step: the reaction to the reaction. The squad were united, the manager had their backs. It was a crucial moment in forging togetherness, as even Southgate acknowledged.

‘For our players, what happened in Montenegro and Bulgaria was the start of that,’ he explained. ‘We had really open conversations as a group where people got to know each other a bit better, got to know each other’s feelings, respect their views, so it was clear in my head how we’d need to respond.

‘There are decisions that aren’t universally popular – and they haven’t been – but they are what we stand for as a team and a group. Even though that might have disappointed some people, it was critical for us to support our team-mates and support each other. 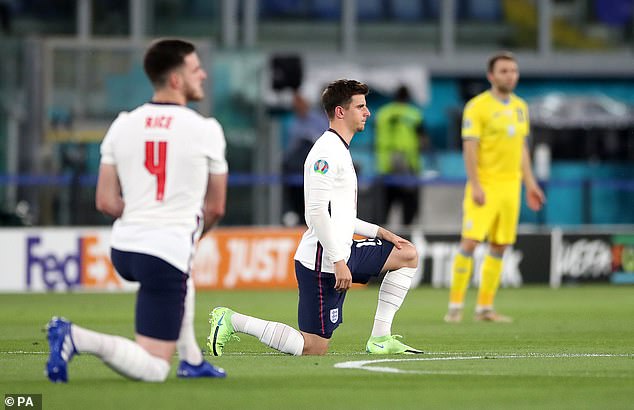 England’s squad were united on taking the knee before games, and Southgate had their backs

‘These things take time. I was talking with Steve Holland last night – in our first Under 21 game the full-backs were John Stones and Luke Shaw, Harry Kane was on the bench, Jesse Lingard, Eric Dier – so those relationships have been forming over a long period of time.

‘I suppose they know how we’re going to react in certain situations. There is consistency to our behaviour, our values, the decision-making process. They recognise what has been built.

‘Conor Coady was the first one off the bench last night, jumping in the air replicating Jordan’s header – I could see him as I was watching the video back this morning.

‘That type of character – someone like Conor, who is one of the loudest voices in the dressing room before a game and on the training pitch every day – you can’t put a value on it.’

And it is hard to put a value on what Southgate brings. The clarity, the decency, the common sense. Remember the two days when the hot topic was sponsor placements because Cristiano Ronaldo and Paul Pogba had been moving Coca-Cola and Heineken bottles at press conferences?

And then Southgate was asked about it and, while advocating moderation, explained that without the financial input from these companies, sport – the grassroots in particular – would be harmed immeasurably. 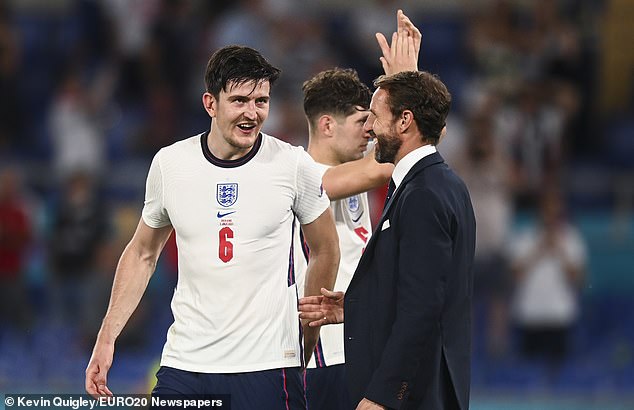 It’s hard to put a value on what Southgate brings, which is clarity, decency and common sense

Everyone paused and nodded agreement. It’s barely been mentioned since. The same last Friday when Southgate was offered the chance to moan that a second yellow card against Ukraine could take four of his players out of a semi-final.

Wasn’t this harsh? Southgate could have played along. Had a distracting whinge, a pop at UEFA, made a negative headline.

Instead he reasoned that a one-match ban for two bookings across five games was not especially worthy of complaint and any relaxing of the punishment could open the door to pretty brutal behaviour. He saw a picture bigger than his own. He saw what was better for the game.

It will be argued that none of this admirable logic beats Denmark on Wednesday; that matches are not won by thoughts and deeds, but that isn’t true. 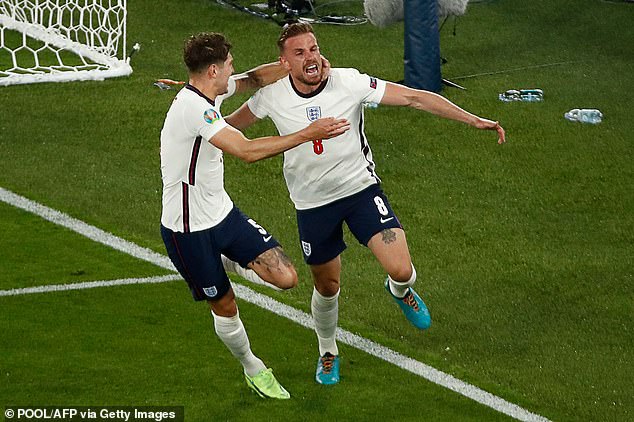 Finally, this crop of players don’t see the national team as synonymous with spite and failure

All of this is allied to the smart, successful decisions Southgate has made as a manager.

To the team who have gone deeper than any other without conceding; to the striker who has started scoring; to the resurgence of Sterling, the maturity of Saka. To a generation of players who do not see the national team as synonymous with spite and failure. All of this can be traced back to Southgate’s stewardship.

Sometimes there’s a man, and he’s just the man for his time and place. That’s Southgate. He’s the Dude.