It’s a delightful image, like a good Soviet-era joke. The long-serving chairman of the Sydney Cricket Ground Trust, Rodney Cavalier, a cricket man through and through, knew when he left his position in 2014 that he could not personally steer the future debate on whether to rip up the centre square for winter and replace it, in summer, with a drop-in wicket. He foresaw that the football codes, bent on conquest, would never ever give up.

Cavalier knew that as an ex-chairman he would be living too far from Sydney and be too far gone in the knees to strap himself to the hallowed turf or stand before the bulldozers, Tiananmen Square style. So he left a parting gift. The renovation of the SCG, which Cavalier oversaw, did not leave a vehicle entry wide enough to import the drop-ins used in Melbourne and Adelaide. Snookered!
Unfortunately for Cavalier and those who want to preserve the SCG for the use that God intended, it will take more than a narrow driveway to stop the drop-in revolution. 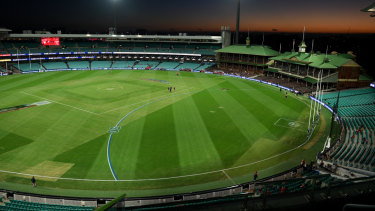 The AFL is eager for a drop-in wicket to be introduced to the SCG.Credit:AAP

Among its unlimited powers, the AFL put a man on the moon and sealed the Chernobyl reactor, or could have if it wanted to, so presumably it could arrange to get a slab of turf in and out of the SCG. It wants a drop-in. Cavalier’s successor, the Greater Western Sydney Giants chairman Tony Shepherd, has set up an SCG Trust committee to assess the AFL’s request that in summertime, we turn on, tune out, and drop in.

The old saying is that if you want to kill an idea, send it to a committee. But Cricket NSW wasn’t prepared to take any risks, writing to the committee: "Drop-in pitches simply do not deteriorate over the four days of a Sheffield Shield match or five days of a Test. In multiple venues, with some of the world's finest curators in control, they continue to have a sameness about them which fail to express the unique characteristics that exist in Sydney with the natural pitch. Deterioration is key to a spinning pitch, therefore there is a real risk that moving to drop ins will nullify the unique characteristic that the SCG is famous for, and risk it becoming just like any other ground around Australia." In other words, it’s not that drop-in wickets are of uniformly poor quality, but that they are homogeneous. The Adelaide Oval’s new decks have improved after a rough start, but have lost their old variety and spin-friendliness. Perth Stadium is benefiting from lessons learnt interstate. Its new wicket was rated unfavourably by the International Cricket Council after its inaugural Test match last December, but it did produce a good Test match. The strongest cricket argument against drop-ins is still the Melbourne Cricket Ground, which serves up cricket so torpid that spectators can safely doze off in their Boxing Day post-prandial stupor in the knowledge that they won’t miss any excitement.

It’s not about soil, it’s about soul. This is the earth where Bradman scored his hundredth hundred, where John Snow sconed Terry Jenner, where Allan Border bowled Australia to victory over the West Indies at their peak

But there are two sides to the argument, and it would be mistaken to impose an Orwellian "four legs good, two legs bad" simplification on drop-ins versus natural wickets.

The MCG’s tradition of terrible wickets goes way back before the drop-in era, Perth had some natural stinkers at the WACA, and although the SCG has improved greatly, its wicket was, not too long ago, crumbly and slow and dreary, the second-worst in the world behind the MCG. Natural does not have to mean better. It’s said that drop-in wickets can’t have the same bounce as natural strips. Back in 1977, John Maley grew greenhouse pitches for World Series Cricket that were chaotically bouncy – they were not always safe, but they enabled some of the most exciting cricket ever played.

These are cricket arguments. The Trust committee will be presented with forceful football arguments. While the AFL has been the prime mover in urging reform, the other codes are close behind. When Sydney FC played on the ground last season, the pitch square was so hard and slippery that they decided to take their games elsewhere. The NRL, which has had so much else go its way (a couple of billion dollars’ worth of government expenditure for a start), is keeping a lower profile, but league players have had their heads slammed against that cricket pitch for more than a hundred years. Greater awareness of concussion is going to form a compelling part of the case for laying softer turf in the middle of the ground. 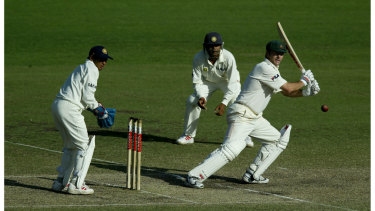 Steve Waugh’s “Perfect Day” century in 2003 is just one of many iconic cricket moments in SCG history.Credit:Heath Missen

The push to dig up the SCG is part of the continuing fallout from the NSW government’s decision to square the circle (rectangulate the oval?) at the Olympic Stadium in Homebush. This was a rare setback for the AFL. If the plan for world domination by GWS comes to fruition, both the Giants and the Swans will only have one venue to play their biggest matches. The stadiums policy has placed the SCG at the centre of the AFL’s Sydney strategy. The Swans have a current deal to play there until 2047.

Understandably, the AFL wants a surface that is easier underfoot and more consistent. Just as Kerry Packer managed to pay for the lighting towers, the AFL would certainly manage the issue of the narrow driveway. When you have power and influence, there is always a way.

Cavalier’s nice little blocking move connects more strongly to the real decisive factors in the debate, which are symbolic and sentimental. The place is not called the Sydney Football Ground. The former chairman said this week, "When you come to the membership of the Sydney Cricket Ground, I don't know of any of the many hundreds of people I know who joined the SCG in order to watch AFL. They may now watch it, but they joined and new members continue to join because of cricket … The business of the SCG, the clear majority of revenue, comes from cricket and cricket-related membership subscriptions." Ground zero of the debate is symbolic. It’s not about the pitch for a new pitch, it’s about the heart of Sydney. It’s not about soil, it’s about soul. This is the earth where Bradman scored his hundredth hundred, where John Snow sconed Terry Jenner, where Allan Border bowled Australia to victory over the West Indies at their peak, where Steve Waugh struck his famous Ashes last-ball century, where Shane Warne bowled his first ball in Test cricket, and where Phillip Hughes fell. It is also the turf, rock-hard centre and all, where so many great league grand finals were (and will be) played and, lest we forget, where Tony Lockett scored the most important point in Swans history.

The committee must weigh all the arguments but also must not lose sight of the soul of this place. The fulcrum of the debate is, and should be, the human heart. There is also a gut appeal to fairness. The winter codes come from a position of strength, but this does not mean they have to win. They already have a lion’s share of the corporate dollar and the media landscape and steal away the best young cricketers for their dark winter designs. It’s down to the SCG Trust to leave cricket this one patch of earth that is, for a mostly secular world, the closest we have to the sacred. Once it’s gone, we can never get it back.

Let’s hope that the committee’s purpose is not a cynical exercise in preparing the ground, as it were, for change. It will be argued that Trust member Stuart MacGill didn’t need a "natural" pitch to turn the ball as he did; he could have spun a cricket ball on glass.

But don’t forget those MacGill appeals to umpires, down on one knee, arms raised, face purple with desperation – reason only achieved so much, while soul did the rest. Emotional appeals, backed by the commercial sense in serving the SCG’s cricket-loving membership, do have validity and ought to save the pitch. And then Sydney can get down to fixing its real problem in the first week of January, which is its dependably crummy weather. Maybe it should ask the AFL to do something about that.