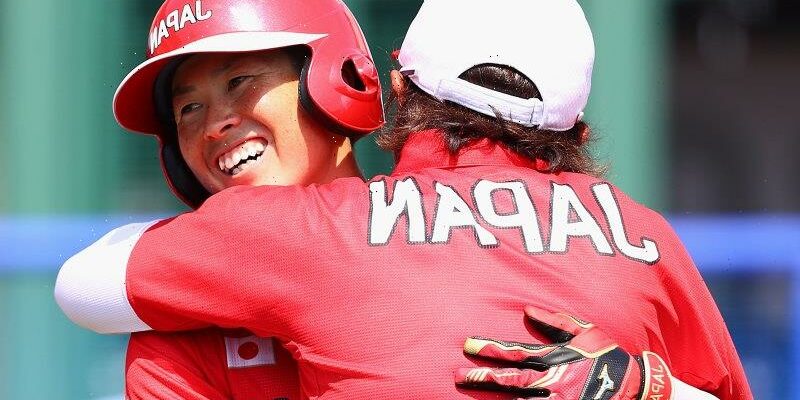 Fukushima: The unstoppable force of the coronavirus pandemic has met the immovable Olympics on a softball pitch in Fukushima. The Games are on.

Just after 9am on Wednesday the first pitch of these troubled Summer Olympics was thrown, a 108-kilometre-per-hour under-arm rocket towards Australia’s Michelle Cox.

A bunt and a scramble to first base and it was done. The COVID-19 infections and pandemic-induced recessions that have defined more than 18 months across the globe, suddenly consigned to the outfield for the first moments of these made-for-TV Games. 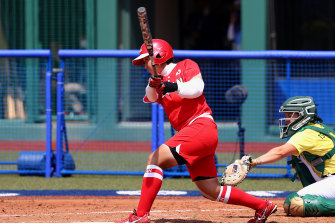 Sayaka Mori bats in the fourth inning against Australia at the Tokyo Olympics in Fukushima on Wednesday. Credit:Getty Images

When it came, it was more surreal than the months of expectation could have prepared us for. The first runs were scored in an empty stadium filled with a canned atmosphere surrounded by the Azuma mountains. A sombre Japanese national anthem was followed in the second innings by pre-recorded chants of “Aussie, Aussie, Aussie”.

“The opening game of the Olympics is a pretty big buzz for us,” said Australian captain Stacey Porter. “No crowds are a little bit different but we have got a job to do on the diamond. We can create an atmosphere within our dugout.”

For the next three weeks, the world will watch on as 339 events across 50 disciplines attempt to cut through the noise of the most expensive, most controversial, and most protested Olympics ever staged.

In the background a pandemic rages, adding 450,000 cases a day globally, 3000 of them in Japan alone on Tuesday. Sydney, Melbourne and Singapore are in lockdown. Tokyo is under a state of emergency as up to 18 per cent of COVID tests come back positive.

But the city, the country and the International Olympic Committee are pressing on.

“The simplest thing and the easiest thing is to quit,” Japanese Prime Minister Yoshihide Suga told the Wall St Journal on Wednesday. “But the government’s job is to tackle challenges.”

“If you compare our number of infections to countries abroad, we have fewer by a whole order of magnitude,” he said. “We’ve got vaccinations advancing, we’re taking tough steps to prevent infections, and so my judgment is we’re in the right place and we’re ready to go.” 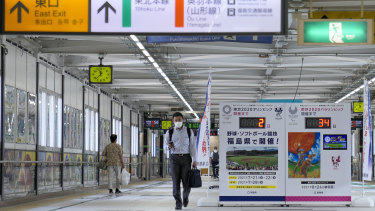 Fukushima station on Wednesday as the opening game of the Olympics begins nearby. Credit:Chris Jue

If anyone knows the value of determination it is the area surrounding Fukushima in this north-east corner of the main Japanese island of Honshu. The effects of the 39-metre wave that wiped out schools, homes and families in 2011 are still visible on the communities that dot the Tohoku coast, four hours north of Tokyo.

From 470,000 residents evacuated then, 41,000 still have not returned, but slowly the rice fields and schools are filling back up around where the earth first shook triggering the tsunami.

Slowly, major manufacturers are returning to the area. In 2017, it eclipsed its pre-tsunami GDP for the first time as new industries including tourism and wineries sprung up.

But while some regions are finding their feet, others are struggling. The exclusion zone around the Fukushima power plant, 80 kilometres east of the Azuma stadium, remains in place a decade after the tsunami triggered a meltdown in its No.1 nuclear plant. Futaba, a town close to the reactor had lobbied to be included in the Olympic relay to show the reality of its situation, but was bypassed because it remains under an evacuation order.

When Japan won the rights to the Games in 2013, it wanted to pitch the Fukushima recovery to the world. It could never have imagined a pandemic would come along nine years later, flip that recovery on its head and give it a whole new meaning.

The mayor of nearby Minamisanriku, Jin Sato, told The Sydney Morning Herald and The Age ahead of the Games that with no spectators many of the areas that surround Fukushima were not going to benefit economically. “But it will boost the mood among the Japanese people,” he said.

On the ground outside the Olympic spectacle now being beamed to locked down homes around the globe, it is difficult to reconcile with that optimism in a country where two-thirds of those polled said they don’t want the Games. 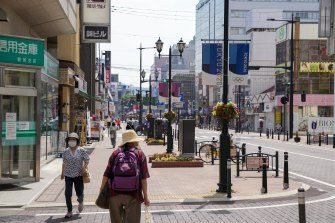 At Fukushima station on Wednesday the daily countdown to the Opening Ceremony ticked down to two, but few were there to see it in a city largely uninterested or unable to get involved in the Olympic experience. There was scarcely a passenger on the bullet train from Tokyo. In pre-pandemic times, in this softball powerhouse, it would have been filled with fans dressed in blazing red.

Japanese softball captain Eri Yamada said she was proud to open the Games and hoped that, as they continued, support at home – even if it restricted to people’s loungerooms – would grow.

“I’m very happy and I think this is a very good start for all of the Japanese teams,” she said. 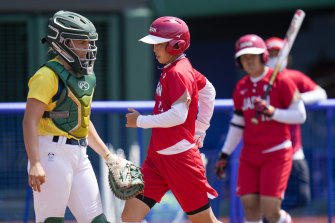 Japan’s Eri Yamada, centre, scores a run during the softball game between Japan and Australia, the Tokyo Olympics opening event, on Wednesday.Credit:AP

She should be. Four-one up at the bottom of the fourth innings, Japan never looked like it was going to give up the lead. It raced to an 8-1 thrashing of the Australian team by the fifth. The game was called off under the mercy rule.

It was a big win for a country that needs one.