Dubai: Socceroos coach Graham Arnold is expecting an emphatic reaction to his side's dire Asian Cup opener as they look to put their continental title defence back on track in Dubai on Friday night.

It's only the second competitive fixture in the job for Arnold since taking over, but the stakes could not possibly be any higher against Palestine – and everyone in the camp knows it. 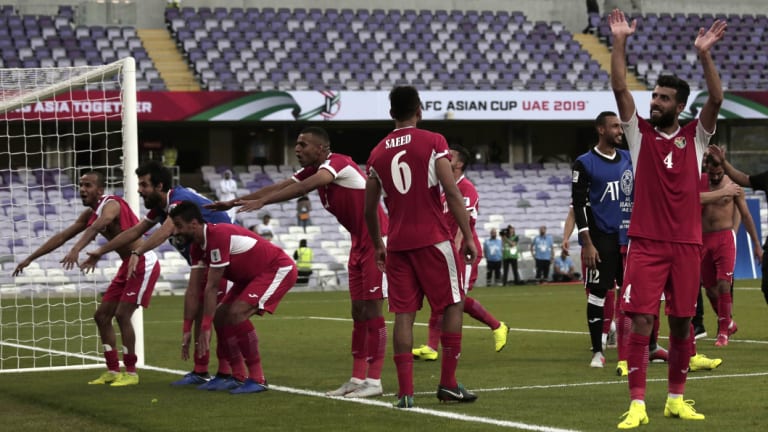 Boilover: Jordan’s players celebrate after their shock 1-0 win over Australia in the Group B opener.Credit:AP

Victory at the Rashid Stadium is essential to ensure Australia's destiny at the tournament remains in their own hands, as well as to restore external confidence in the team after they slumped to one of their worst defeats in recent memory against Jordan.

The consequences of another loss or even a draw, which would dramatically heighten the risk of a potential group-stage exit, do not bear thinking about.

In terms of pure talent, the Socceroos most certainly have Palestine covered. But the same was true last week in Al Ain, when a ferocious and focused Jordanian outfit pulled off one of their most famous victories over the reigning Asian Cup champions.

Australia were out-enthused. It simply cannot happen again – and if it does, they will be duly punished. Palestine proved they have the capacity to frustrate a technically superior opponent by holding Syria to a gritty scoreless draw in their first Group B assignment, playing out the last quarter of the match with 10 men. 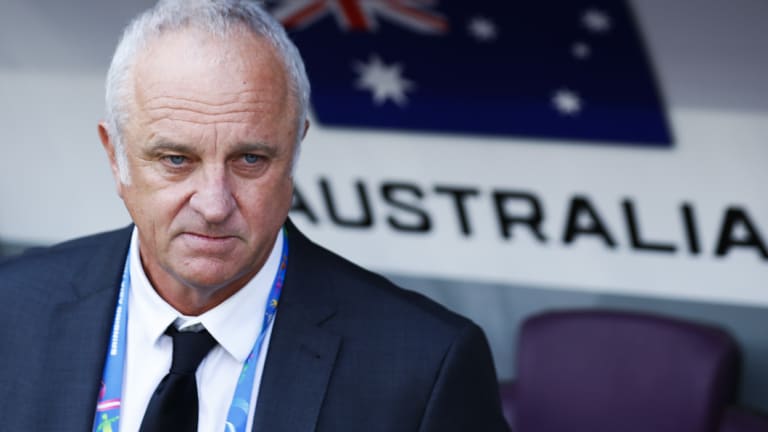 Confident: Arnold is expecting his players to show a marked improvement against Palestine.Credit:AP

"This next game we've got to come out and fight," Arnold said. "The first part of it in a football match is the football quality where we've got the edge … but it's about the fight as well. We've got to show the same desire. Match that fight and then we'll win the football game.

"I've seen the hurt after the game and I've seen the motivation. They're on the edge, they're ready to go. I expect a reaction."

The fallout from Australia's first-up loss has been highly critical amongst supporters and in the media but inside the team environment, the mood remains upbeat – even if there is an unspoken tension in the air.

It's possible the team fell victim to its own hype. Players and coaches were not afraid to put their neck out prior to the tournament, talking up their new gameplan so confidently that foreign media and their opponents interpreted it as hubris. The breezy 5-0 win over Oman in their final pre-Asian Cup friendly may have also lulled them into a false sense of security.

Goalkeeper Mathew Ryan‘s admission that the Socceroos were guilty of "going through the motions" against Jordan was rather damning considering the importance Arnold had placed on mental fortitude.

Arnold preferred to describe it a little differently. "I don't like using that word," he said when told Ryan had described the Socceroos as complacent. "I think maybe just ball speed was too slow.

"Our rotations were good, our actual movement was okay – it was just the ball speed. Too many touches and sloppiness with the passing, behind someone or too hard or just in front. Things like that, we tidy that up and everything will be good."

Arnold said he did not give his players a serve for their performance as it wasn't his style, preferring to focus on the positives, like the number of chances they generated in the second half.

"There were a lot of good things in the Jordan game," he said. "Obviously they parked the bus and made it hard for us but there was a lot of good stuff that we showed the boys.

"If something doesn't go to plan, I've always been someone that's been very positive … it's my job to pick them up straight away and I've done that. I've picked them up.

"I don't yell, I don't shout. I may seem like I'm a person like that but I'm not. I'm completely opposite and I'm going to keep them happy. These things happen in football."