Simone Biles revealed her decision to pull out of Team USA’s gymnastic team final and the chance of a first gold medal was governed by her mental health and losing faith in her ability as a world-class gymnast.

Observers inside the Ariake Gymnastics Centre and around the world were left stunned when the four-time Olympic gold medalist was pulled out of action after misjudging her vault in the first rotation. Biles, who was on course for a record six golds in gymnastics, disappeared backstage with a coach, before returning to inform teammates Grace McCallum, Jordan Chiles and Sunisa Lee they would have to go on without her, bringing them to tears.

The inexperienced trio pushed the Russian Olympic Committee all the way before having to settle for silver, trailing by 3.432 points. The States had won the previous two golds in 2012 and 2016.

“I don’t trust myself as much as I used to,” said an emotional Biles. “I don’t know if it’s age and I’m a little bit more nervous when I do gymnastics.

“I feel like I’m also not having as much fun. This Olympic Games I wanted it to be for myself but I came in and I felt like I was still doing it for other people. It hurts my heart that doing what I love has been kind of taken away from me to please other people.”

The 24-year-old also disclosed the uncertainty had begun earlier in the day. After the usual morning warm-up for evening competition, she was unable to calm herself down.

“We had a work-out this morning. It went ok and then just that five and a half hour wait or something, I was shaking, could barely nap. I just never felt like this going into a competition before. I tried to go out and have fun and warm up a bit better but when I came out here I was like, mentally, it is not there so I need to let the girls do it and focus on myself.”

The trigger was a moment during Biles’ attempted Amanar flip when she realised she was not going to be able to pull off the requisite number of twists required to execute the move into a safe landing. Thankfully, she landed on her feet, but the thud into the mat and extra steps to steady herself drew concern gasps from the stands.

“I did not choose to do a one-and-half!” she said. “I was trying to do a two-and-a-half and it just was not clicking.

“They saw a bit of it in practice,” she said of her three teammates, who were by her side. “It’s very uncharacteristic of me so it just sucks that it happened here at the Olympic Games because it could happen any other time. But with the year that it’s been, I’m really not surprised how it played out.

“After the performance that I did, I didn’t want to go into any of the other events second guessing myself so I thought it was better if I let these girls go out there and do the job and they did just that so I think tonight they get a gold medal from me in fighting because they never gave up and they showed the world what they’re capable of.”

The episode, and Biles’ subsequent revelations, throws into doubt the rest of her Olympic Games. She is due to compete in the all-round final on Thursday, the first of five individual events remaining. “We’re going to see about Thursday,” she said when asked if this was it for the Games, and her career. “We’ll take it a day at a time. I know tomorrow we have a bit of a break from training so that’ll be really nice, to have a mental rest day.”

It will go down as one of the most staggering occurrences in Olympic sport. Maybe all sport. An athlete at the peak of her powers choosing to put her health above her ambition. The lines between mental anxiety and performance are all the more intertwined with gymnastics, specifically the high-risk kind Biles has made her own.

A contributing factor to her stress has also been USA gymnastics sexual abuse scandal which saw former physician Larry Nassar sentenced to 175 years in prison and criminal proceedings on others. Biles, a victim, came forward with her story at the beginning of 2018 and has been fighting that fight ever since.

It seemed, for the most part, that she had found balance. But an off-colour showing on Sunday in the team qualifier and Tuesday’s withdrawal speak of the pain she is still suffering.

“I felt pretty comfortable coming into the Olympics and then I don’t really know what happened just going through each of the days and the training it’s just felt a little bit tougher. 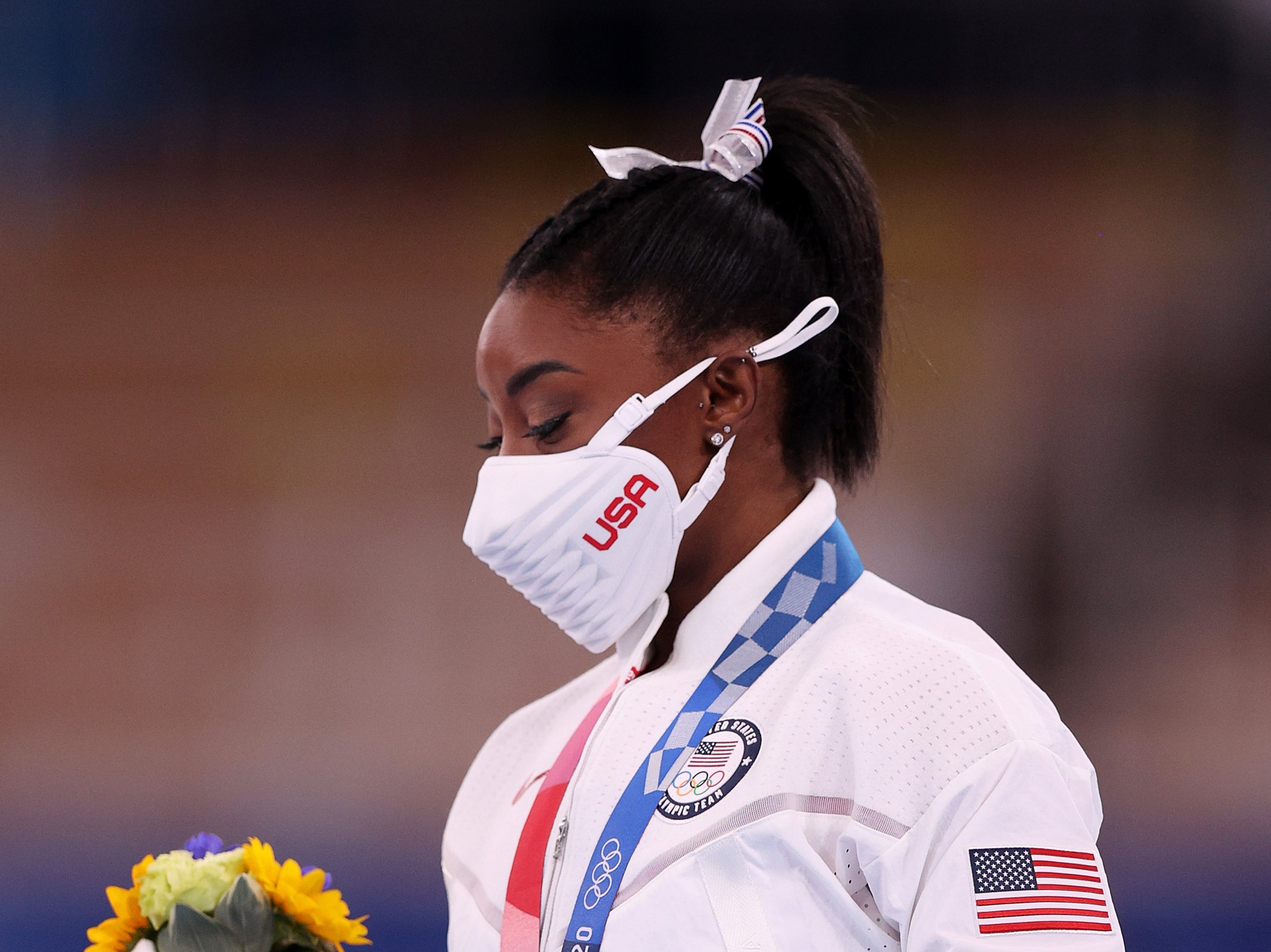 USA fought back to claim silver without Biles

“Therapy has helped a lot as well as medicine and i feel like that’s all been going really well but whenever you get in a high stress situation you freak out and you don’t really know how to handle all of those emotions, especially being here at the Olympic Games. Yes, we have tons of resources available to us but I’m one to try and tough it out until the last minute and obviously it didn’t work that way. Moving forward we’ll go back to the tactics that have always worked so we’re just going to see.

“Gymnastics isn’t everything at the end of the day, there’s still more to life than gymnastics so I’m not too worried about what happened, just trying to gear up for the next couple of days ahead.”

Above all, Biles seems satisfied with her decision. Not just that she did not cost her team a medal by continuing, but also that she was able to make a call of this magnitude for the right reasons.

“I think it shows power in the athlete. Protecting my mental and well-being that I didn’t want to go out there and do something dumb and get hurt and be negligent. So I knew for myself that I had to take a step back. If you would have said four or five years ago, that definitely wouldn’t have been that Simone – I would have gone out there and did whatever.

“But today it was like, you know what, I don’t want to do something stupid, get hurt. It’s not worth it, especially when you have three amazing athletes that can step up to the plate and do it. Not worth it.”