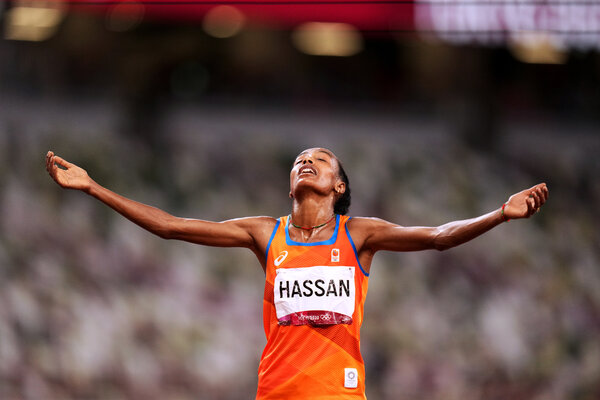 TOKYO — At the end of 24,500 meters of hard running in six races over nine days, Sifan Hassan of the Netherlands stood alone before tumbling to the track, disbelief etched across her face.

In her final event of the Olympics, Hassan outkicked Kalkidan Gezahegne of Bahrain, who was second, and Letesenbet Gidey of Ethiopia, who drifted to third. Gidey holds the world record in the event, but even she was no match for Hassan, who finished in 29 minutes 55.32 seconds.

Hassan, 28, was about 24 hours removed from winning the bronze in the women’s 1,500 meters on Friday night. She had tried to push the pace in that race before faltering late as Faith Kipyegon of Kenya defended her title from the 2016 Olympics. Afterward, Hassan said she was pleased.

That she was even attempting to medal in three taxing events was a unique feat of endurance — something no athlete has accomplished. Consider, too, that she had fallen in her semifinal heat of the 1,500 meters on Monday — on the final lap, no less.

She bounced back up and methodically worked her way past the pack to win. Later that day, she raced away from the field the 5,000 meters to claim her first gold of the Games.

On Friday, after her third-place finish in the 1,500, Hassan acknowledged that she was “stressed every day.” And tired. So very tired. She was relieved, she said, that she had only one race left to focus on. In a way, her mind was uncluttered for the 10,000 meters. It showed.

The race quickly turned into a battle of attrition in hot and muggy conditions. Three runners dropped out before the race was halfway over. With 13 laps remaining, just seven runners out of a field of 29 remained in the lead pack.

Then five. Then four. As the carnage played out, Hassan tucked herself behind Gidey and Hellen Obiri of Kenya, just ahead of Gezahegne in fourth. Eventually, Obiri succumbed to the elements and the tempo, and dropped off the back, too.

On the first turn of the final lap, Hassan pulled herself onto the right shoulder of Gidey, and sprinted away — straight toward history.