Carl Nassib was not the most eager interview subject on Penn State’s football team. He once begged off a media scrum by claiming he had a chemistry exam, which was not strictly true, though he was known to rhapsodize more about “recrystallization as a purification mechanism” than the minutiae of Purdue’s off-tackle trap.

He arrived on campus as a walk-on in 2011, majoring in biology and intending to become a pediatrician. Many people, Nassib included, thought at the time that he would probably make his mark in medical school, not in the N.F.L.

“I thought he would run a hospital and be the chief surgeon,” said Kevin Pellegrini, who coached Nassib at Malvern Preparatory School outside Philadelphia.

When Nassib did speak to reporters about football, though, he was candid about his restlessness and ambivalence. He wondered at times, “Is it worth it?” And frequently asked himself, “Am I on the right path?”

He said he sought more than victories and statistics, something urgent and impactful that would satisfy himself and influence the lives of others. Now 28 and a defensive end for the Las Vegas Raiders, Nassib arrived at one of those moments of major impact on Monday, when he became the first active N.F.L. player to publicly announce that he is gay.

In a brief Instagram video and an accompanying statement released during Pride Month, Nassib said he felt “gratitude and relief” at being able to live an authentic life, free of secrets, after agonizing over the moment for 15 years, more than half his life.

He spoke of the importance of representation and visibility for the L.G.B.T.Q. community. He said he hoped that one day videos like his and the whole coming-out process would not be necessary. Until then, he said, he would do his part to “cultivate a culture that’s accepting and compassionate.”

He and his family have declined to comment further.

“In football we always preach that in tough times in a game or a season, someone needs to step up and make a play,” Pellegrini said. “I think Carl has taken that approach to life and said, ‘I will be the one who will step up here.’”

Nassib said he would try to help save lives by donating $100,000 to the Trevor Project, a nonprofit dedicated to crisis intervention and suicide prevention among L.G.B.T.Q. youth. The N.F.L. matched Nassib’s donation and, by Thursday, the organization said its daily online donations had doubled.

“Carl coming out does not end all discrimination, but it helps L.G.B.T.Q. young people to be able to dream in a different way, to be able to see possibilities that they previously might have thought were off limits to them,” said Amit Paley, the chief executive of the Trevor Project.

About two months ago, Nassib contacted the Trevor Project directly about coming out publicly. He wanted to “shine a light” on the organization’s work, Paley said, “and use this moment to help and spread awareness about L.G.B.T.Q. young people who might be struggling.”

For Nassib to have the N.F.L. as a platform to make his groundbreaking announcement was remarkable, given that a professional football career for him once seemed so improbable. 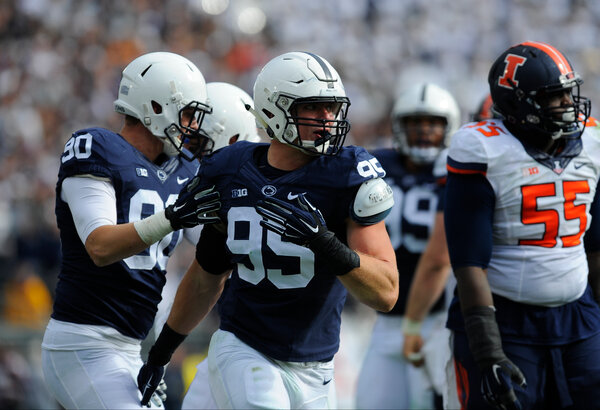 His father, Gilbert, played tight end at Delaware, where Carl’s younger brother, John, played on the defensive line. His older brother, Ryan, played quarterback at Syracuse and was drafted by the Giants in 2013. His mother, Mary Fischer-Nassib, played volleyball at Villanova. But Carl never started a football game in high school.

He put together a video of his highlights from Malvern Prep and sent it to Penn State. An assistant coach there was intrigued by Nassib’s ranginess at 6 feet 5 inches, 218 pounds. But he was built more like a willowy basketball forward than a football lineman. And Nassib acknowledged to The Philadelphia Inquirer that he had some initial wariness about playing college football. “I didn’t have my mind set on it,” he said. “My dad and older brother did. They said that I should at least try. From the start, they had more faith in me than I had in myself.”

Eventually, Nassib said, he grew thankful that they had pushed him. But he had to wait his turn to reach the field. He took a redshirt season at Penn State in 2011 and did not enter a game in 2012. Bob Shoop, a former Penn State defensive coordinator, said he was told that when Nassib said to the head coach, Bill O’Brien, that he wanted to play in the N.F.L. someday, O’Brien replied, “You’re going to have a hard enough time making this team.”

It was a decisive moment in Nassib’s career. The words stung, and he did not believe them, he later told reporters, but he came to appreciate O’Brien’s candor. “I took it as fuel to get better,” Nassib said. “I wanted to do the best I could and prove him wrong.”

When Nassib entered O’Brien’s office for a meeting before training camp in 2013, he had not yet paid his tuition for the fall semester. He worried that he would not be allowed to continue with the team as a walk-on. But O’Brien surprised him with a scholarship.

Fully embraced by his coaches and teammates, more determined and confident in his own ability, Nassib began to bulk up in the weight room. After his junior season in 2014, though, he was disappointed by his relatively little playing time. He urged Shoop, the defensive coordinator: “Invest in me, coach. I’m a good investment.”

Nassib continued to get bigger and stronger and to polish his technique at defensive end. As a senior in 2015, he had filled out to 6-7 and 272 pounds. Finally, he became a starter, led the nation with 15½ sacks and won the Lombardi Award as the nation’s top lineman. Medical school would have to wait for the N.F.L.

But perhaps the most resonant moment of that season occurred off the field. In a story widely reported at the time, Nassib had lunch one day at a Chipotle restaurant, where he met a woman and her daughter, who had Down syndrome. Nassib sat with them and made such an impression that the mother sent an email expressing her gratitude to James Franklin, who had replaced O’Brien as Penn State’s head coach. The connection with Nassib had brightened her daughter’s day, the mother wrote. Franklin invited the mother and daughter to practice.

Nassib recounted the interaction to The Philadelphia Inquirer two months later, placing it in the context of his career. He had no regrets about football, he said, but he sometimes wondered “if it was worth it or not.”

There “would be those really awesome moments when I thought, ‘All right, I’m doing the right thing,’” he told the newspaper. “But even now, sometimes I’ll wonder: ‘Am I really doing the right thing?’ Success or stats, whatever, that doesn’t really make me feel like I’m on the right path.”

But there were also moments like the lunch encounter, he told The Inquirer, that “made me realize that this comes with a lot of opportunity to impact people. That’s what made me feel like, ‘Yeah, I’m on the right path.’”

In December 2015, Nassib traveled with his mother to receive the Lombardi Award in Houston. As he held the trophy, he told The Houston Chronicle: “I’m just a walk-on. What am I doing here? I feel like I just stole this thing.”

While in Houston, Nassib and his mother visited a children’s hospital. The visit inspired Fischer-Nassib and two other women to start a nonprofit in 2018: Sow Good Now, which engages athletes in philanthropy, community service and social awareness.

“When Carl stepped into a room, all of the parents jumped up, the kids were so happy,” Fischer-Nassib said in an interview last year with The American College of Financial Services. “It made me realize that no matter the message, people respond to athletes. They give their time and treasures — that’s philanthropy.”

In the 2016 N.F.L. draft, Nassib was chosen in the third round by the Cleveland Browns. He spent two seasons there, then two in Tampa Bay before signing a three-year, $25 million contract with Las Vegas in March 2020. Until Monday, though, his most widespread visibility had come during Cleveland’s 2018 training camp, which was documented by the HBO series “Hard Knocks.”

Nassib once described himself as feeling awkward when he was younger and said he developed a sense of humor both to fit in and to help cheer up people who were down. In one episode of “Hard Knocks,” he displayed his nerdy financial acumen and salty locker-room humor to teammates by filling a dry-erase board not with Xs and Os, but with the intricacies of compound interest.

At practice one day, the cameras captured Nassib talking about little green men, and he did not mean the Packers. To bless-your-heart smiles and eye rolls from a few teammates, he said that the Canadian minister of defense “came out publicly and said that the United States is in contact with three different alien species.”

On Monday, Nassib stood in his yard in West Chester, Pa., and spoke with a similar nonchalance, only this time his remarks were pioneering and taken seriously enough to stop the sports world in its tracks. “What’s up people,” Nassib said, and then, “I just wanted to take a quick moment to say that I’m gay.”

Freedom and certainty seemed evident on his face, as if he no longer worried whether he had taken the right path.