Justin Thomas secured a four-stroke lead over Adam Scott and JB Holmes at the conclusion of the third round of the rain-interrupted Genesis Open in Los Angeles on Sunday (Monday AEDT).

After starting the round tied with Australian Scott, Thomas jumped clear with a six-under-par 65 at Riviera to post 17-under 196 for the tournament, while Scott managed a 69 and was joined on 13 under by American Holmes (68). 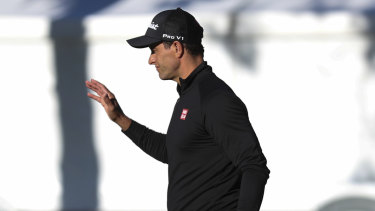 Contention: The final round will be a war of attrition, with Adam Scott sitting equal-second with 18 holes to play.Credit:AP

Thomas was seven strokes clear of anyone else. Big guns Rory McIlroy, Jordan Spieth and Tiger Woods were seemingly too far back to have a realistic chance of victory.

McIlroy (69) and Spieth (70) were eight strokes behind, while Woods trailed by 10 despite a stellar 65. His score matched Thomas's as the best of the third round.

The Genesis Open is the only event on the PGA Tour that Woods has played at least 10 times without a win.

Former world No.1 Thomas has already won nine times on the PGA Tour, including a major at the 2017 PGA Championship.

The 25-year-old's most recent victory came at the WGC-Bridgestone Invitational last August.

The final round on Sunday began almost as soon as the third had finished.

Players barely had time for a quick bite on a marathon day after resuming the third round in semi-darkness at 6.45am local time.

The tournament was put behind schedule due to a seven-hour rain delay on Thursday.