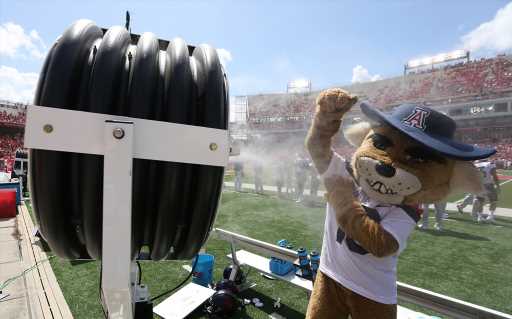 Reaction to Pac-12 developments on and off the field …

We’re 18 days into the Jedd Fisch era, and two things are immediately clear:

That might not seem important, but if it accurately reflects Fisch’s broader view of external relations, then it’s absolutely significant.

One of Kevin Sumlin’s many failings was his refusal to partake in what could be loosely termed the marketing aspects of the job.

Unless you have championship rings or your program recruits itself, the front-facing aspects of being a head coach matter tremendously.

Sumlin could not have cared less about those components — at least, that was the impression he gave — and it undercut the program’s appeal locally and regionally.

That Fisch appears eager to engage the college football world through Twitter (and with a sense of humor) is an encouraging sign for the program.

— The staff hires have cleared the minimum bar necessary for success.

Fisch hired two Arizona legends (Chuck Cecil and Ricky Hunley) to forge a necessary connection to the community and alumni base.

He added a Pac-12 veteran in Jimmie Dougherty.

And in a move that made national news, Fisch hired well-regard defensive coordinator Don Brown, who parted ways with Michigan recently.

The most important hires for a new head coach are always the strength-and-conditioning coach and the coordinator for the other side of the ball.

For Fisch, that means the defensive playcaller.

That said, we’re drawing no conclusions about the coaching staff’s ability to recruit at the level required to propel Arizona into the top half of the division.

Of the confirmed hires, most have not been active on the west coast recruiting trail in recent years.

Offensive coordinator Brennan Carroll has been in the NFL for six years as the Seahawks’ assistant offensive line coach.

Hunley, who will oversee the defensive line, hasn’t coached since 2015.

Cecil, who’s working with the secondary, has never been a college coach, save for his brief stint as Arizona’s interim defensive coordinator last season.

Scottie Graham (running backs) played in the NFL but has never been a college coach.

All of which means a heavy load of recruiting responsibility seemingly falls on two staffers:

— Tight ends coach Jordan Paopao, who spent seven years with Washington, was let go by Jimmy Lake in 2019 and spent this past season at UNLV.

— Dougherty, who coached for Washington, San Jose State and, most recently, UCLA.

For any program, recruiting is about contacts, energy and appealing to teenagers.

For the Wildcats specifically, it’s about re-establishing themselves within the state and making progress in Southern California.

Neither task will be easily accomplished.

3. Separation Saturday (on the court)

The Pac-12 basketball race gained a significant dose of clarity today, particularly with results from the Mountain Time Zone.

USC and UCLA completed their sweeps in Arizona, marking the first time they have gone 4-0 in the desert since the Arizona schools joined the conference in 1978 (per ESPN).

More significantly, the results in Tempe and Tucson provided framing for the top tier of the standings, with UCLA (5-0) the lone unbeaten and USC (3-1) just one game back in the loss column.

Meanwhile, Oregon (4-1) won in Salt Lake City to secure a road split and keep pace with the Bruins.

The fourth team on the top shelf is Stanford (4-1), which swept the Washington schools at home but has a rugged three weeks ahead.

Meanwhile, we’re left to wonder about the state of the Wildcats (3-3), who are ineligible for the postseason and quickly losing ground in the conference race.

The Hotline received a news release from the conference office Thursday morning that trumpeted the Pac-12’s participation in a study on the COVID-19 quarantine period for college athletes.

Admittedly, it didn’t leap to the top of our to-do list that day.

When the title of a Pac-12 release begins “Pac-12 contributes to important new research findings …” you know the news value is probably not substantial.

But this is COVID, the study was run by the CDC, the Hotline is a sucker for science … so we read the release.

That turned out to be the smart move, because it included a link to the study itself, which was published in the CDC’s “Morbidity and Mortality Weekly Report.”

Schools from several conferences participated in the study, which focused on PCR testing for athletes who were placed in quarantine after being identified as close contacts.

Almost half the 1,800 athletes were football players.

— Based on contact tracing, the sports setting (i.e., organized team activities) accounted for only 13 percent of the exposures.

Not surprisingly, the vast majority of COVID exposures were traced to social gatherings (42 percent) and roommates (32 percent).

— Of the 846 football players who were identified as close contacts and placed in quarantine, only 29 percent subsequently tested positive.

So if a football player (in any conference) tested negative for the first 10 days of quarantine, it was extremely unlikely he would turn positive in the final few days of the 14-day period.

A lot of players were held out, a plethora of games were not played and tends of millions in TV money was lost …  unnecessarily.

5. All quiet on the schedule front

Based on my inbox, Pac-12 fans are currently more interested in one topic than all the others combined: The 2021 football schedule.

Unfortunately, I don’t when it will be released.

The Hotline asked the conference office, but it couldn’t provide an estimate.

My best guess: The second half of January.

For context, here are the dates from recent years:

This year, the situation is presumably more complicated because ESPN and Fox have been dealing with the massive disruption to the 2020-21 sports calendar, potentially delaying their ability to hammer out the college football lineup for next fall.

For what it’s worth: Neither the Big 12 or the SEC has announced its schedule for 2021.

Support the Hotline: Several Hotline articles will remain free each month (as will the newsletter), but for access to all content, you’ll need to subscribe. I’ve secured a rate of $1 per week for a full year or just 99 cents for the first month, with the option to cancel anytime. Click here. And thanks for your loyalty.

*** Pac-12 Hotline is not endorsed or sponsored by the Pac-12 Conference, and the views expressed herein do not necessarily reflect the views of the Conference.