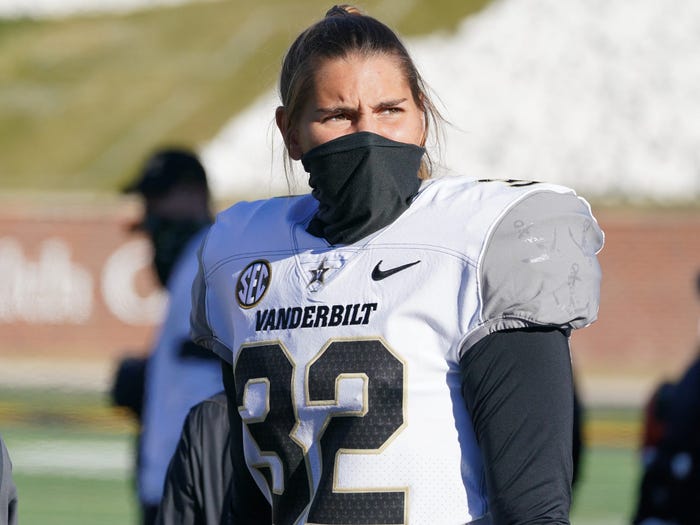 Sarah Fuller made history as the first woman to participate in a Power 5 college football game when she kicked for the short-staffed Vanderbilt Commodores Saturday.

And though her perfectly-executed squib kick was powerful enough to break through the glass ceiling, it didn't have the "oomph" necessary to impress skeptics. But that doesn't mean Fuller isn't capable of delivering massive boots; quite the contrary.

The newly-minted Vanderbilt kicker is the starting goalkeeper for the school's women's soccer team, and she put her leg strength on full display last month during the Commodores' run to their first SEC Tournament title in 26 years. In the 72nd minute of Vanderbilt's quarterfinal game against the Tennessee Volunteers, Fuller launched a free kick across the entire soccer field and into the opposite 18-yard box to earn an elusive assist from the goalkeeper position.

Fuller shared a clip of the impressive play on Twitter Monday as a reminder of her impressive kicking abilities. And, as if to silence critics of her participation with the football team, she paired the video with the caption "I'm just going to leave this here…"

Fuller may have a chance to put that strong leg to good use on Saturday. Commodores interim head coach Todd Fitch confirmed that she is continuing to practice with his team. And Fitch — who took over the program after former head coach Derek Mason's dismissal last week — added that Fuller would travel to Athens, Georgia, this weekend ahead of Vanderbilt's game against the No. 11 Georgia Bulldogs.

"She'll be with us on the trip to Georgia, and we're going to put the best people out there," Fitch said, per ESPN. "If she's our best option, we'll continue with her, and we'll do the best we can for the team."