Alibay Barkley always wanted to name his son something unique. He initially campaigned for Machiavelli, in honor of his favorite rapper, Tupac Shakur, who nicknamed himself for the 15th century Italian philosopher. But Barkley’s wife, Tonya Johnson, vetoed that.

Eventually, they agreed on Saquon, a name that had small roots in the Johnson family tree. It was similar to his older sister’s name, Shaquona, yet made him distinct from almost anybody else in the country.

The rarity of Barkley’s name would soon be commensurate with his talents on the football field. During an otherwise miserable season for the Giants, Barkley, the No. 2 pick in this year’s draft, has emerged as an offensive wunderkind offering some hope for the future.

In the process, he has positioned himself to join an exclusive club of mononymous superstar athletes: Tiger, Serena, Shaq, LeBron and, at least in New York, a quarterback named Eli. There will be no need for a cheesy branding effort like “TB12” or “RG3” with Saquon.

“I believe your name should mean something and sound correct with your last name, too,” his mother said. “If it was like Jeff Barkley, it would sound bland.”

And little about Barkley, the Giants’ highest draft choice since Lawrence Taylor in 1981, would be considered bland. This year, he has already shattered franchise rookie rushing records, is vying for a rushing title, and with two weeks to play is third in the N.F.L. in total yards from scrimmage, with 1,809. He is widely expected to claim the N.F.L.’s offensive rookie of the year award, matching Odell Beckham Jr., the only other Giant to win it.

Opposing teams have clearly taken notice. Ahead of last Sunday’s matchup against the Tennessee Titans, Coach Mike Vrabel said containing Barkley would be “our biggest challenge of the year without a doubt.”

(Tennessee lived up to the task, limiting Barkley to a season-low 56 total yards by concentrating the defense on him almost every play).

He is, in the estimation of another former Giants running back with a famous first name, a “generational” type of playmaker.

“He’s blessed with the physicality that a lot of backs with his speed don’t have,” Tiki Barber said. “If you hesitate, he’ll run by you. If you take him low, he’ll run through you.”

The Giants might have missed their chance to draft another franchise quarterback last April. But in more ways than one, there is no other Saquon in the N.F.L.

In fact, nationwide, there may be as few as seven people with that name, according to the Social Security Administration, which maintains a registry of names given to at least five babies within a calendar year.

In New York City, the health department says that no more than 10 people were given that name since Barkley was born in the Bronx in 1997. Even in the rest of New York State, excluding the city, no Saquon has appeared in the databases since registration began in the 1920s.

A derivation, Saquan, is slightly more common; that name first appeared in 1975 and peaked with 48 babies in 1998. 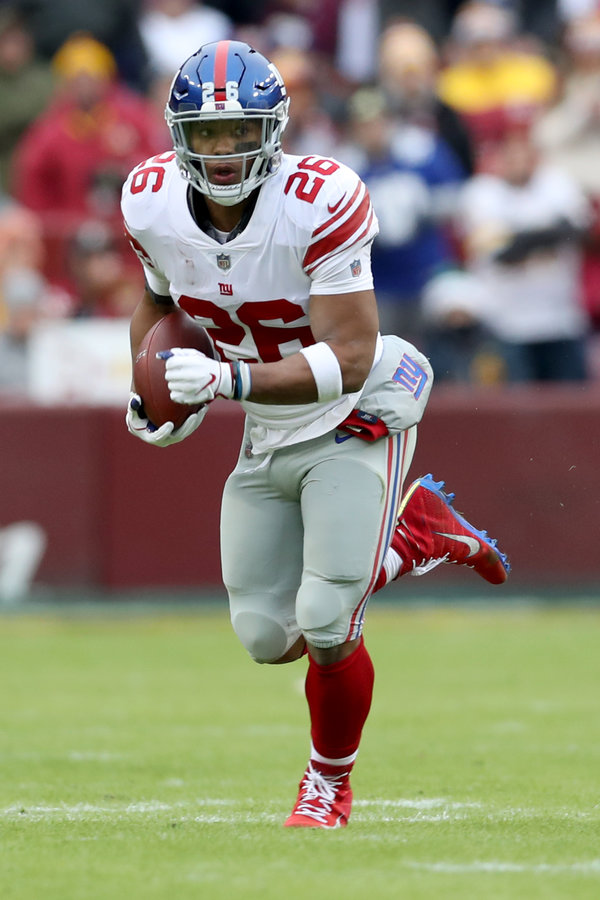 But, if history and N.F.L. jersey sales are any indication, Barkley’s popularity could soon inspire new parents to push his given name up in the Social Security rankings. Consider that there were approximately 14 people in the United States named “Kobe” before a teenage basketball prodigy surnamed Bryant was drafted in the N.B.A. in 1996. Today, there are thousands.

For many years, Barkley never thought too much about his name. His family primarily called him “Sa-Sa” (pronounced Say-Say). One of his middle names, Rasul, held more personal meaning for his parents; in Arabic, it means “one who is sent.” (His other middle name, Quevis, was selected more arbitrarily.)

Johnson said that she had a cousin named Laquon, a name she always liked. But she and her husband wanted something that would pair nicely with their daughter’s name.

Barkley, who owns the handle @saquon on Twitter and on Instagram, where he has more than 1.4 million followers, has embraced his name.

“It’s unique,” he said during a recent interview. “I love unique. I love that my names have meaning.”

Maryann Parada, an assistant professor in modern languages at California State University, Bakersfield, is an expert in sociolinguistics and the etymology, history and use of proper names. She said the choice Saquon seemed to follow shifting naming practices that started in the 1970s, drawing on a number of resources. One of them was modeled after a French sound pattern (-wan ending) that joined existing French elements like La- or Le- as a prefix and -ique or -iqua as a suffix.

Barkley’s name, while unusual, she said, has a certain clarity.

“It follows the common bisyllabic pattern for masculine names,” Parada said in an email, “composed of an open syllable followed by a closed syllable (e.g. LeBron, DeShawn, Shaquille, etc.),” which are the ”uan/wan suffixes.”

For Barber, having a different kind of name (in his case, a lifelong nickname) became something of an ideal he made an effort to live up to.

“It’s a brand,” he said. “Kids loved saying my name because it was kind of cool. It rolls off your tongue very easily.”

“Saquon’s the same way,” he added. “It’s fun to say. It keeps a lasting image and feeling in your mind.”

Lately, that image has been the back of Barkley’s jersey streaking away from defenders.

On a 78-yard touchdown run against the Washington Redskins recently, Barkley’s breakaway speed reached 21.91 miles per hour, according to the N.F.L.’s Next Gen Stats. It was the highest recorded velocity of any rushing touchdown this season, beating the time on a score by Titans running back Derrick Henry.

“21.74,” Barkley said, conceding sheepishly that he knew Henry’s time. “I saw it on Instagram, or something like that.”

The touchdown was Barkley’s fourth of more than 50 yards this season. No other N.F.L. player has had more than two since Adrian Peterson in 2012.

Magic? That name is taken.

Beckham has come up with an alternative nickname for Barkley. He began calling him R.O.Y. in August.

“Rookie of the year,” Beckham said. “He’s going to be one of the greatest ever.”