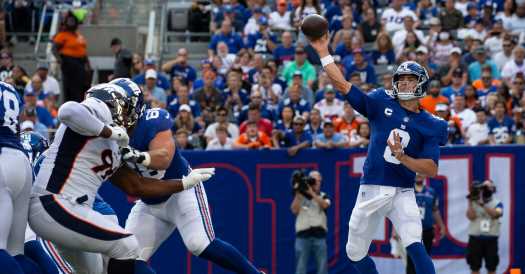 Running back Saquon Barkley dodged and bulled his way to a 5-yard gain on the first play from scrimmage in Sunday’s game between the Giants and Denver Broncos. Barkley, the cynosure of the Giants’ offense until a torn knee ligament kept him out of 14 games last season, seemed whole again, and the home fans at a packed MetLife Stadium leapt to their feet in response.

Moments later, the Giants third-year quarterback, Daniel Jones, threw a 42-yard pass to his favorite receiver, Darius Slayton, which advanced the Giants into Denver territory. There was more unbridled euphoria in the grandstand.

But then the Giants lost eight yards on the next two plays, squandering any chance of scoring even a field goal. One drive later, the Giants ran three desultory plays without gaining a yard and punted. Soon they were trailing Denver by three points. Then by 10 points, then by 17.

A new Giants season suddenly looked no different than last year’s 10-loss disappointment. The fans slumped back into their seats.

The opening day of a football season always has an air of rebirth — until it feels like a repeat.

As the final seconds of Denver’s thorough 27-13 thumping of the Giants wound down — the home team would score a meaningless touchdown on the game’s final play — the MetLife stands were mostly empty. That had been the case last season, because of pandemic restrictions. The void this time, however, felt different, especially since the remaining soundtrack of the event was the raucous cheering of a few thousand Broncos fans.

In the end, Barkley rushed for only 26 yards on 10 carries. Jones, charged with reducing the costly turnovers that have been the scourge of his first two seasons as a starter, lost a fumble deep in Denver territory at a pivotal juncture of the game. The Giants’ much ballyhooed defense repeatedly failed to force the Broncos off the field as Denver converted seven of 15 third-downs — and all three fourth-down tries.

It left Joe Judge, the second-year Giants coach, cognizant of why Giants fans scurried for the MetLife Stadium exits by the midpoint of the fourth quarter, if not earlier.

“We have to earn their respect,” Judge said of the fans. “We have to give them something to cheer about. There was great energy and a great atmosphere in the stadium but we’ve got to do more as a team to make them want to stay and cheer.”

The star of the game was the resurgent Denver quarterback Teddy Bridgewater, who completed 28 of 36 passes for 264 yards and two touchdown passes. The less-observed constituent who had significant impact on the outcome was the Broncos’ offensive coordinator, Pat Shurmur, the former Giants coach who on Sunday flummoxed his old team’s defense.

Jones completed 22 of 37 passes for one touchdown. Neither quarterback had an interception and each was sacked twice, although Bridgewater faced only sporadic pressure from the Giants pass rush.

After a 15-play drive that took nearly nine minutes, Denver opened the game’s scoring in the second quarter with a 23-yard field goal by Brandon McManus. On their next possession, the Giants came out aggressively on first down with Jones throwing a 17-yard pass over the middle to receiver Kenny Golladay, one of the team’s foremost off-season free agent acquisitions.

Four plays and a defensive pass interference penalty later, the Giants pushed into the Broncos’ end of the field. On a first down, Sterling Shepard, the longest-tenured Giant, ran a lengthy crossing route and caught a precise Jones pass before diving into the end zone for a 37-yard touchdown that gave the home team a 7-3 lead.

In roughly two minutes at the end of the first half, led by the poise, elusiveness and accuracy of Bridgewater, Denver had regained the lead. Bridgewater completed six consecutive passes, the last a 2-yard touchdown toss to Tim Patrick that sent the Broncos into the game’s intermission with a 10-7 lead.

Denver picked up where it left off after receiving the second-half kickoff. Although the Broncos’ running game was nonexistent, the Giants’ pass defense was still overwhelmed, in part because the feeble Giants offense kept it on the field for so much of the game.

It took the Broncos 16 plays to traverse 75 yards, as Bridgewater continually used his legs to extend plays. On the final play of the drive, a fourth-and-1 at the Giants 4-yard line, Bridgewater scrambled to his right as he was closely pursued by Giants safety Xavier McKinney, who was grasping at Bridgewater’s headgear and shoulder pads. On the run, Bridgewater flipped the football into the end zone where Albert Okwuegbunam made an acrobatic catch in traffic for the Broncos’ second touchdown, extending their lead to 17-7.

On the following possession, the Giants did mount a comeback — of sorts.

After the Giants advanced to the Denver 22-yard line, Jones burst through the middle of the Broncos defensive front for a 7-yard run then wrapped two hands around the football in an attempt to prevent a fumble. But Denver linebacker Josey Jewell punched the ball free from Jones’s grasp and Jewell’s teammate Malik Reed fell on the football at the Denver 15-yard line. Once again, a promising Giants possession ended with a Jones turnover that resulted in a 36-yard McManus field goal that increased the Giants deficit to 20-7.

The game was, at that point, all but over.