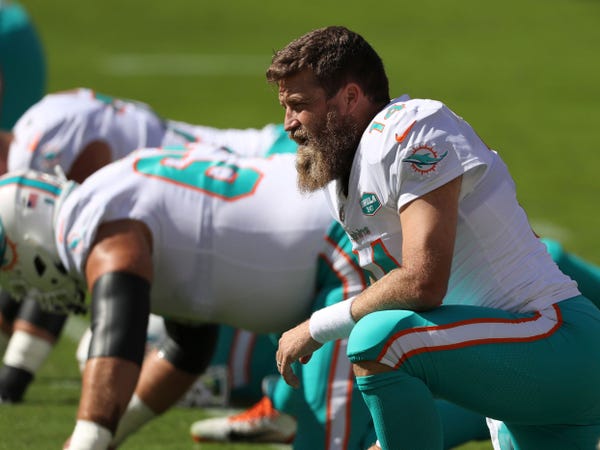 The Miami Dolphins announced on Tuesday that the team would be moving quarterback Ryan Fitzpatrick to the bench and promoting rookie Tua Tagovailoa into the starting role in the offense.

The news came as a shock to many in the football world, as Fitzpatrick played solid football to start the year, with the Dolphins 3-3 on the season and just a game out of leading the AFC East.

But it sounds like no one was as shocked to hear the news as Fitzpatrick himself, who discussed the change on a call with reporters on Wednesday. While Fitzpatrick acknowledged that he understood his role as a "placeholder" quarterback for the franchise, it was still devastating to hear the change was coming.

"My heart just hurt all day. It was heartbreaking for me," Fitzpatrick said. "[Dolphins head coach Brian Flores] kind of said what he said … and that's the decision and the direction that the organization is going in.

"We've talked in the past, me and you guys, about how I'm the placeholder. This eventually was going to happen, just a matter of 'when' not 'if.' But it still, it broke my heart yesterday. It's a tough thing for me to hear and to now have to deal with, but I'm going to do my best with it.

Fitzpatrick's disappointment is understandable, as he's been playing well for the Dolphins and been a top-15 quarterback in the NFL by most measures through the first six weeks of the season.

Still, Tagovailoa was a top prospect coming out of college, and the fifth-overall pick in the draft this spring. He's the future of the Dolphins franchise, and it looks as though Miami is ready to get that future started now.

On Sunday, Fitzpatrick led the Dolphins to a 24-0 lead over the Jets — a lead that was so dominant it gave Tagovailoa his first NFL action as he came in to close out the game on Miami's final drive. As Tagovailoa took the field, no one was cheering louder for him than Fitzpatrick.

With the Dolphins making the change official, Fitzpatrick will have to figure out how to be just as supportive of his teammate despite the sudden change in their dynamic.