Romain Grosjean suffered one of the most dramatic accidents of modern Formula One history at the start of the Bahrain Grand Prix – but he miraculously survived.

The Frenchman’s Haas hit the wall at 53G and burst into a ball of flames, splitting his chassis in half and, astonishingly, sending him through the barriers. TV cameras cut away and the race was stopped.

Fears for his safety were palpable in the Sakhir circuit, sparsely populated because of Covid but suddenly heaving a collective sigh of apprehension. 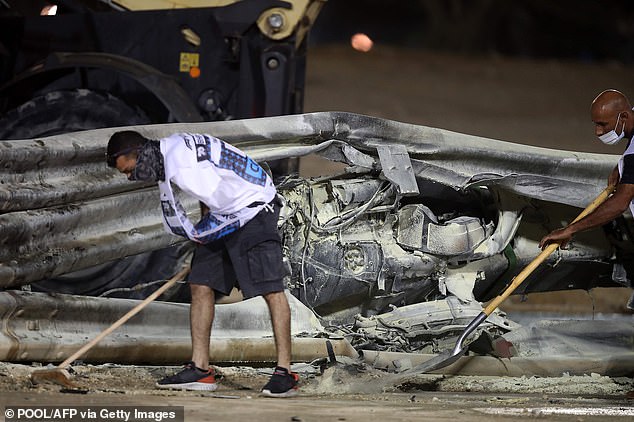 The remains of Grosjean’s car, which broke into two after the crash, was cleared from the track

He was helped into an ambulance by marshals and limped as he did so. He suffered minor burns to his hands and ankles. It is also suspected that Grosjean has sustained broken ribs.

Grosjean has been airlifted by helicopter to Salmaniya hospital, 25 miles away, for further treatment.

It is unusual for a Formula One car to self-combust and it remains unclear precisely what happened – though he collided with Daniil Kvyat before hurtling off at the third corner of the first lap.

TV replays later showed him scrambling out of the car as marshals sprayed the scene to douse the flames.

It was a remarkable accident and part of his car penetrated the barrier and a stray wheel jumped over the wall.

Having travelled through the barriers, he climbed to safety by hurdling the wall and returning on the trackside. 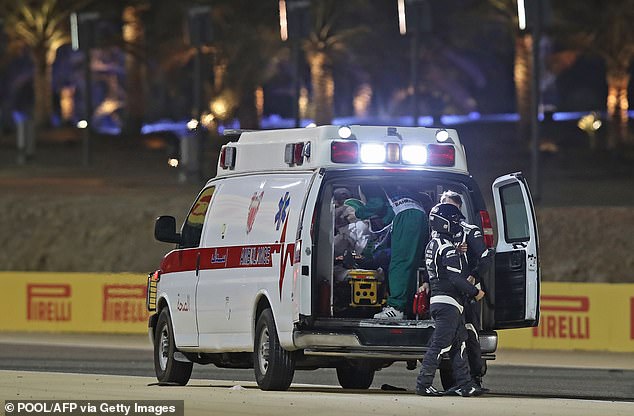 Grosjean, who was taken to the medical centre, suffered minor burns and also broken ribs

Footage seen after the incident revealed that Grosjean had moved to the right of the track before clipping the front wheel of Kyvat’s AlphaTauri car. The Frenchman then lost control and careered straight into the wall.

A delay of at least 45 minutes is expected to take place while work to clean up the horror crash and repair the barrier is carried out.

It is unclear whether the race will continue at all, however.

Lewis Hamilton, who started the race in pole position, was seen shaking his head after watching a replay of the collision. 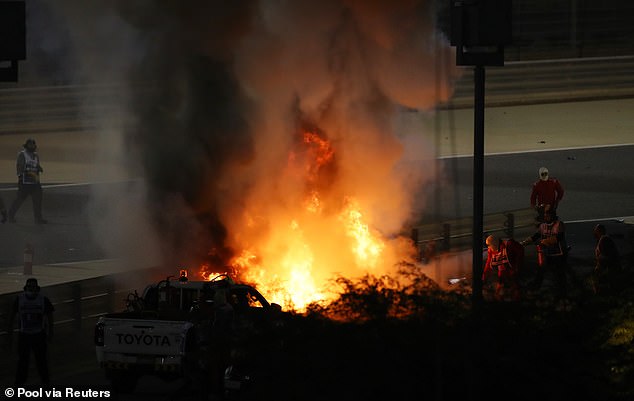 Shaken Haas team principal Guenther Steiner told Sky Sports: ‘[Grosjean] is doing OK. He has light burns on hands and ankles. Obviously he is shaking and going through all the checks but he’s fine.

‘He’s seems to be OK and the rescue was very quick. The marshals and FIA did a great job. It was very scary.

‘We were lucky by being unlucky. He got a way with it I think.

‘It looked like he went across the track with the front wheel and went full speed in the barrier. But I’ve only seen what you guys have seen.’