The 41-year-old, who on Monday (0600 AEDT) is aiming to add the World Club Challenge title to his resume, is taking the opportunity to meet up with three of British football's biggest names – including England boss Gareth Southgate – as part of the European trip. 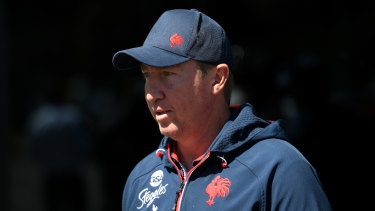 Sponge: Trent Robinson has been keen to get ideas from other codes during the Roosters’ trip to Europe.Credit:AAP

Weeks after beating the Melbourne Storm in last year's decider, Robinson was plotting how to become the first man since Wayne Bennett at Brisbane over 25 years ago to win back-to-back premierships.

Ahead of an annual Christmas visit with his wife's family in France, Robinson contacted Southgate to see if he'd be interested in exchanging ideas.

Robinson says it's been a great experience to pick the brains of the three high-profile coaches.

"They were all incredibly accommodating," he said. "I first got to spend some time with Brendan in Scotland; he is a very intelligent man and was great to talk to.

"Gareth Southgate was much the same; super smart but also very driven about what he wants to achieve.

"Sean Dyche really impressed me. There is a man who can get the best out of a team.

"He is not coaching the biggest team in the Premier League but he knows how to set up teams to win and is very clear about his principles. He's also very hard nosed but incredibly charismatic."

Southgate has one of the toughest jobs in world sport, dealing with a success-starved, expectant nation still clinging to a World Cup won over 50 years ago and an insatiable national media.

However he managed to win over the English public last June by guiding the team to the World Cup semi-finals for the first time since 1990, which is what prompted Robinson to approach him. 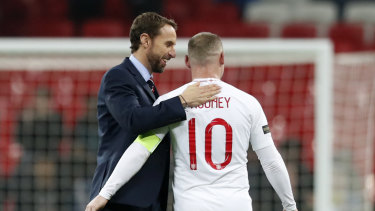 Gareth Southgate, who has dealt with immense pressure, was one of the coaches sought out by Robinson.Credit:AP

"It was all different stuff that was discussed," Robinson said. "How you work on tactics, how you deal with players off the field, how you work with the media and of course the psychology of the team and what you as a coach can input to them."

Robinson says it's been a while since he's had conversations with such sporting luminaries.

"They were so open and honest," he said. "It was really interesting and beneficial."

"It's been an awesome six years but we want to create some longevity here," he said. "We want to keep getting better, 2018 is done.

"Once you start looking backwards that's when you slip up."