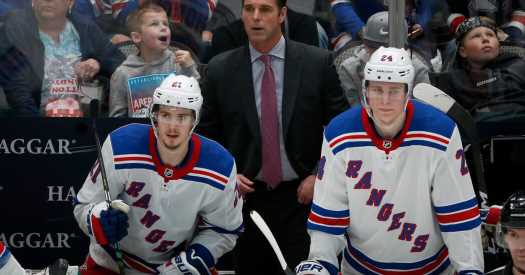 Tumult continued for the New York Rangers as David Quinn was fired on Wednesday after three seasons as the team’s coach.

The decision to part ways with Quinn, hired with much fanfare in May 2018 from Boston University, was made by new President and General Manager Chris Drury, who took over when President John Davidson and GM Jeff Gorton were dismissed a week ago.

The 54-year-old Quinn was 96-87-25 behind the bench since replacing Alain Vigneault, who had coached the Rangers for the previous five seasons. Quinn has two years remaining on the five-year, $12 million contract the Rangers gave him to leave his college job for the N.H.L.

Assistants David Oliver, Greg Brown and Jacques Martin were also dismissed, while goaltending coach Benoit Allaire, who has been with the organization since 2004, was kept on.

“I would like to thank David Quinn, David Oliver, Jacques Martin, and Greg Brown for all of their efforts and dedication to the Rangers,” Drury said in a statement. “I wish each of them the best in their future endeavors. We will begin our search for a new head coach immediately.”

Among available candidates to take over are former Rangers coach John Tortorella — who parted ways with Columbus earlier this week — as well as veteran coaches Gerard Gallant and Mike Babcock, former Arizona Coyotes coach Rick Tocchet, plus Hall-of-Fame goaltender Patrick Roy, who was Drury’s teammate with the Colorado Avalanche when they won the Stanley Cup in 2001.

Former Rangers captain Mark Messier — who led the team to the Stanley Cup title in 1994 — has also recently expressed interest in a role with the team.

Quinn was expected to develop the group of young talent on the team’s roster. The Rangers have made eight first-round picks since 2017, five of whom were on the roster during the just-completed 56-game season that the Rangers finished with a disappointing 27-23-6 record.

Under Quinn’s leadership, young defensemen Adam Fox and Ryan Lindgren made significant progress in their development, and K’Andre Miller showed promise in his rookie season. Quinn was behind the bench as the Rangers added Kaapo Kakko second overall in 2019 and Alex Lafreniere with the top draft pick last year. He also presided over the emotional torch-passing in goal from the franchise legend Henrik Lundqvist to Igor Shesterkin.

But Quinn’s squads were regularly inconsistent and developed a reputation for being flat early in games. They seemed flummoxed when the opposition bottled up top scorers Artemi Panarin and Mika Zibanejad, and often seemed incapable of making in-game adjustments.

Three late-season drubbings by the Islanders, which eliminated any chance the Rangers had of making the playoffs for the first time since 2017, may have sealed Quinn’s fate. The Rangers were included in last summer’s qualifying round in the Toronto bubble, but were swept in three games by the Carolina Hurricanes.

Quinn was only the second coach in franchise history who came to the Rangers with a college pedigree; the other was Herb Brooks, who was behind the bench from 1981-85 after he led the U.S. Olympic team to the gold medal at the 1980 Games in Lake Placid.