Rafer Johnson, who carried the American flag into Rome’s Olympic Stadium in August 1960 as the first Black captain of a United States Olympic team and went on to win gold in a memorable decathlon duel, bringing him acclaim as the world’s greatest all-around athlete, died on Wednesday at his home in the Sherman Oaks section of Los Angeles. He was 86.

Michael Roth, a family friend and spokesman, confirmed the death.

Johnson never competed after that decathlon triumph. He became a good-will ambassador for the United States and a close associate of the Kennedy family, taking a leadership role in the Special Olympics, which were championed by Eunice Kennedy Shriver, and joining Robert F. Kennedy’s entourage during Kennedy’s presidential campaign in 1968. He was remembered especially for helping to wrestle the senator’s assassin to the ground in Los Angeles in 1968.

Johnson’s national profile was largely molded at the 1960 Olympics, one of the most celebrated in the history of the Games, a moment when a host of African-American athletes burst triumphantly onto the world stage. Muhammad Ali, known then as Cassius Clay, captured boxing gold in the light-heavyweight division. Wilma Rudolph swept to victory in the women’s 100- and 200-meter dashes and combined with her Tennessee State teammates for gold in the 4-x-100 relay. Oscar Robertson helped take the United States basketball team to a gold medal.

Johnson’s narrow decathlon victory over C.K. Yang of Taiwan and U.C.L.A., a good friend, provided a thrilling moment in its own right.

Johnson, a 25-year-old graduate of U.C.L.A. and a chiseled 6 feet 3 inches and 200 pounds, was the favorite going into the two-day decathlon, a 10-event test of versatility, strength, speed and endurance that included sprints, high hurdles, pole-vaulting, the high jump and broad jump, the javelin and discus throws, and the 1,500-meter run. 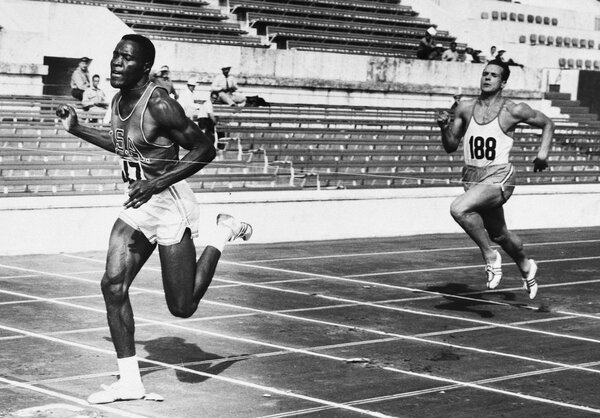 He had won silver in the decathlon at the 1956 Melbourne Olympics, finishing behind Milt Campbell of the U.S., who turned to pro football afterward. He had bested Vasily Kuznetsov of the Soviet Union at a meet at Lenin Stadium in Moscow in 1958, inspiring spectators to put aside Cold War issues and cheer his achievement. And he scored a world-record 8,683 points in the decathlon at the 1960 Olympic track and field trials in Oregon.

But he faced a stiff challenge in Rome from the 27-year-old Yang, who was representing Formosa, the Olympic designation at the time for Taiwanese athletes. Both were trained by Elvin Drake, known as Ducky, the U.C.L.A. track and field coach.

The decathlon duel was decided in its final event, the 1,500 meters, in which Yang was especially strong. Johnson, leading on points, didn’t have to win the event to capture the gold medal, but he did need to finish within 10 seconds of Yang.

“I planned to stick with him like a buddy in combat,” Johnson told The Los Angeles Times in 1990. “I had one other advantage, and I don’t think C.K. knew this at the time. This was my last decathlon. I was prepared to run as fast as I had to in this last race of my life.”

Yang, who died in 2007, recalled, “I knew he would never let go of me unless he collapsed.” Johnson finished 1.2 seconds behind Yang, good enough to capture gold, with Yang getting silver and Kuznetsov capturing bronze.

Johnson later received the 1960 Sullivan Award as America’s leading amateur athlete. After that, he embarked on new chapters in his life.

He met Robert Kennedy at an awards ceremony soon after the Rome Games and became part of the senator’s campaign for the 1968 Democratic presidential nomination.

He was escorting a pregnant Ethel Kennedy through a crowd of supporters at the Ambassador Hotel in Los Angeles on June 5, 1968 — moments after her husband had claimed victory in the California Democratic primary — when Kennedy was fatally shot by Sirhan Sirhan, a Palestinian immigrant who had been angry at Kennedy for his support of Israel.

“My hand clamped down on the weapon,” Johnson recalled in his memoir, “The Best That I Can Be” (1998, with Philip Goldberg). “Rosey’s hand came down on mine. With a dozen others pushing and shoving, we forced Sirhan onto a steam table, then to the floor. I twisted Sirhan’s fingers to free up the weapon.”

Rafer Lewis Johnson was born on Aug. 18, 1934, in Hillsboro, Texas, south of Dallas. His family briefly lived in Dallas and then escaped segregation by moving to the town of Kingsburg in California’s agricultural San Joaquin Valley, where his father, Lewis, held jobs in food processing.

Johnson excelled in football, basketball and baseball as well as track and field in high school, but he focused on the decathlon, inspired by seeing the Olympic gold-medalist Bob Mathias in action in nearby Tulare, Calif.

He entered U.C.L.A. in 1954 and played for the renowned coach John Wooden’s basketball team there while training for decathlons. He also became president of the student body.

His Olympic triumph behind him, Johnson visited many countries in the early 1960s as a good-will ambassador for the State Department. He acted on television shows and in Hollywood movies, including “Wild in the Country” (1961) with Elvis Presley and Tuesday Weld. He was also a sports broadcaster in Los Angeles.

In 1968, Eunice Kennedy Shriver, a driving force in the creation of the Special Olympics for people with intellectual and physical disabilities, drew Johnson into the organization. He became a founder of its Southern California chapter and was later named its chairman. He also did promotional work for Hershey, Reebok and other companies.

Johnson married Elizabeth Thorsen in 1971. She survives him, along with his brother Jimmy Johnson, a former cornerback for the San Francisco 49ers and a member of the Pro Football Hall of Fame; two children, Jennifer Johnson-Jordan, who was a member of the U.S. women’s beach volleyball team at the 2000 Sydney Olympics and is now a volleyball coach at U.C.L.A., and Josh Johnson; and four grandchildren.

Johnson’s final moment in the Olympic spotlight came when he climbed a precarious 99 steps at the Los Angeles Coliseum to light the caldron for the 1984 Games.

“I was, in a sense, an Olympian again, preparing to will my body to do something exceptional,” he wrote in his memoir. “Was I concerned about making it to the top of the stairs? Yes. Was I thinking about whether I might trip or fall? Yes. Did I have any doubt that I would come through? No.”

Who are Susan Rice's parents?
LIFESTYLE