It was the final day of Major League Soccer’s regular season and — right on schedule — the moment for kneeling arrived.

As the messages “MLS Unites Against Racism” and “Black Lives Matter” were displayed on the digital sideline advertising boards, the referee and the players from the Chicago Fire and New York City F.C. dropped to one knee and solemnly bowed their heads. Well, some of them did. Others stood and stared ahead with a steely focus. Two more, just outside the midfield circle, used the moment to have a hushed conversation.

The diversity of displays, four months after a dramatic on-field protest that marked the league’s return to play in Florida amid the pandemic, were neither inherently rebellious or disrespectful. They were, however, a reflection of how easy it can become to overlook gestures, even when surrounded by unequivocal reminders of why they matter.

Across North America, where George Floyd’s killing at the hands of a white police officer in Minneapolis was the spark for a summer of international protests, social justice demonstrations across major professional team sports have been nearly universal: Women’s soccer players took a knee in Utah. So did basketball stars in Florida, hockey players in Canada and baseball and football players in dozens of American cities.

In M.L.S., dozens of the league’s Black players stood on the field before the league’s first rescheduled game for 8 minutes 46 seconds of silence — what had been widely cited as the time a police officer had knelt on Floyd’s neck before he died — and at every game since, dozens of players, coaches and officials still take a knee. 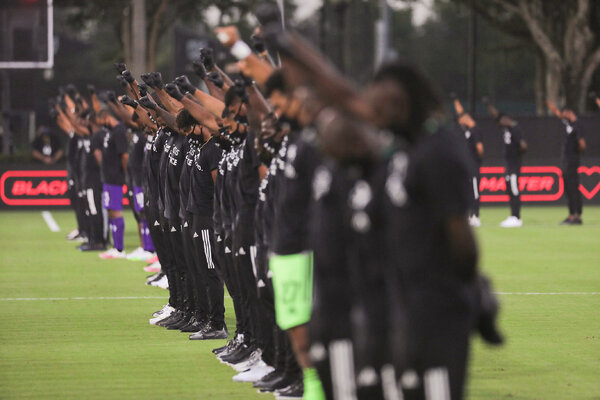 But what started as solemn group gestures have in some places transitioned into just another box to tick on the list of pregame rituals. For an increasingly activist cohort of Black athletes, though, what comes next is paramount.

“Protests are great,” the renowned sociologist and activist Harry Edwards had warned Black M.L.S. players when they called him for advice on how to be heard in their league. “But it comes down to follow through.”

From the start, most of the players kept their focus in the moment. But nearly five months later, and as the league’s postseason opens this weekend, Black soccer players in America are continuing to heed Edwards’s words. Their on-field gestures, they said, are now only part of their mission.

Behind the scenes, players have been pushing to convert their protest currency into tangible, lasting change. They have led voter registration drives in their cities and inside their locker rooms; convinced the league to use its resources to amplify those efforts; created public service announcements to be broadcast during matches; and designed shirts to raise money for racial justice organizations.

The goal, several prominent Black M.L.S. players said in interviews over the past several weeks, was to steer the league into embracing their efforts, and to challenge the way the soccer world engages with Black activism.

Much of the work has been accomplished through organizing — in M.L.S. through Black Players for Change — and by connecting and partnering with Black players’ groups in more prominent sports like the N.B.A. and N.F.L.

The playoffs now offer a bigger stage, and a new opportunity. Justin Morrow, the veteran Toronto F.C. defender and the executive director of Black Players for Change, said his group of about 170 players, coaches and M.L.S. staff members is at a planned transition point in its fight.

“It’s time for us to step back and develop programming and initiatives that are going to affect our local markets and our local communities,” he said. The ultimate goal — the follow through — is not public shows of support but concrete actions to improve access and representation at every level of soccer.

“We’re going to challenge the league every chance we get,” Morrow said, “to make sure that they’re making progress toward racial equality, access and representation within the game.”

Black women’s players have embraced a similar activism. Tziarra King, a Black player for the National Women’s Soccer League’s Utah Royals, said she raised the idea of taking a knee with her mostly white teammates before the league’s Challenge Cup in June. Two months later, King, a 22-year-old rookie, publicly took on her team owner Dell Loy Hansen — also the owner of Real Salt Lake in M.L.S. — after he told a radio interviewer that he had been “personally disrespected” by his team’s decision to boycott a game after the police shooting of Jacob Blake, a Black man, in Wisconsin.

“Messages about inclusion and diversity are in complete contradiction with an owner who refuses to understand the relevance of a player strike for racial equality,” King wrote on Twitter. Other more prominent Black players, including several prominent members of the World Cup-winning United States women’s national team and others in the newly established Black Women’s Player Collective, quickly rallied behind her.

Morrow said part of what inspired Black M.L.S. players was a “growing sentiment in Major League Soccer that they weren’t doing enough for the Black community.”

A recent report from Fare, an organization dedicated to fighting discrimination in soccer, highlighted some of the issues the players said needed to be addressed. As of Aug. 1, for example, Black players constituted 25 percent of the 26 M.L.S. clubs’ rosters but had no representation at the ownership level or as club presidents. The league currently has a single Black general manager, Toronto F.C.’s Ali Curtis; one Black sporting director, the Red Bulls’ Denis Hamlett; and only two Black head coaches. (The N.W.S.L. has no Black representation across the board in corresponding positions.)

M.L.S. Commissioner Don Garber said the protests, and the realities that are driving them, were a reflection that “as a nation we have to come together and accept that where we are is not good enough.”

“It’s about standing up about what’s right and standing against what is wrong and recognizing this incredible moment in our country’s history where we are accepting that there has been systemic racism for hundreds of years,” Garber said. “As a popular, global sports league we have an important and valuable platform, and at appropriate times, we’ll utilize that platform on matters that we believe are of critical social importance.”

Garber acknowledged the league needs to do better. The league has begun the process of recruiting a head of diversity, equity and inclusion, a senior executive post that will report directly to Garber. And it has assured Black players and administrative employees that they will have seats at the table in developing proactive plans to increase representation, and not just in areas related to diversity and inclusion.

“They wanted to know what the league was doing, how we were going to collectively utilize our platforms to ensure that the league was addressing racism and social injustice,” he said. “They never lost focus on the areas that they felt they could make a difference in.”

Already, several Black M.L.S. players said, there have been small victories. In October, the league announced several new initiatives, in collaboration with Black Players for Change, to address racism and increase Black representation in positions of authority, both in the league office and on its teams.

Edwards warns players to be wary of the participation of any league in racial justice campaigns, and to cautiously suspend cynicism only when they see concrete action. The idea is that initiatives themselves aren’t results, but merely a platform on which to build the actual plans that increase representation. It’s a principle, the M.L.S. players said, they will carry with them.

“Our challenge as an organization is to make sure that Major League Soccer is continuing to take those steps in the right way,” Morrow said, “and use our voice and our influence to hold them to the fire.”