The giddy memories from the Philadelphia Eagles’ first Super Bowl victory after the 2017 season have faded dramatically for the team’s famously vocal fans, who have fallen into despair over the rapid descent since.

After squeaking into the N.F.L. playoffs in 2018 and 2019, the Eagles, through a combination of injuries and bad play, went into free fall last season, finishing with a 4-11-1 record. The architects of the championship run were rewarded: Quarterback Carson Wentz signed a second contract reportedly worth $128 million over four years (with about two-thirds of it guaranteed), while Coach Doug Pederson and General Manager Howie Roseman got contract extensions. But Pederson was fired after last season and the oft-injured Wentz, once thought to be the franchise’s future, was traded to the Colts in March.

Roseman, who has been general manager for every season but one since 2010, now must find a way out of the morass for the Eagles in a year when the salary cap was cut 8 percent leaguewide. The Eagles’ current contracts also put them near the bottom of the league in money available for new player signings. Roseman, in two interviews, spoke with The New York Times about the franchise’s uphill climb ahead of the 2021 draft that starts Thursday, where the Eagles hold 11 total picks.

The interview has been condensed and lightly edited for clarity.

There are still restrictions on meeting potential draft picks. For example, you met Carson Wentz four times before you picked him. This year, you would have had no face-to-face meetings. How have you adapted?

Roseman: I think that that’s where the value of our scouting is even more important than ever, because these guys have really studied these players and talked to their sources since they came into college. Now it’s different because of the pandemic. But they have these backgrounds on these guys starting the year before they come out and they are underclassmen. And so you’re really relying on them and who are the leaders of the team. The background and character is such a big part of what we do in a normal year, but even more integral when you’re talking about this kind of process.

You helped rebuild the Eagles after their last downturn in 2015 and 2016. How is the process different this time?

We’ve been in situations before where we might not have as many assets as we do the next two years. We’re excited about that. We climbed the mountain once, we’ll climb it again.

Why did you move on from Carson Wentz after making so much effort to draft him and sign him to a contract extension?

When we looked at the whole picture going forward and being able to not only get the draft picks, but also get close to $50 million in cap relief, we felt like it was a win-win for us, the player and the Colts. And those are the best trades.

What should Eagles fans take away from the trade that sent Wentz to Indianapolis (for a third-round pick this year and a second-round pick next year)?

From our perspective, obviously, that sixth pick is a very valuable pick, and when you look at the opportunity to now get a future first-round pick as well as you move up from the fifth to the fourth round, those are hard to acquire. Because we have so many picks over the next two years, it gives us the flexibility to not only move up and down the draft board, to target some guys, but also if there is an opportunity in the trade market at a particular position, to go get that guy, especially when we look at the cap and how the cap got reduced because of the pandemic.

Was it anything specific about Wentz that led you to move on?

I don’t know that we can point to one factor. I think that it was a variety of factors that led us to this, including his desire for a fresh start.

Does this mean Jalen Hurts is your new franchise quarterback?

This is one of those games that when you take just a small period of time, you can’t evaluate any player just on potential. So for any young player, including Jalen, he has to stack days on days to continue improving and work at his craft. 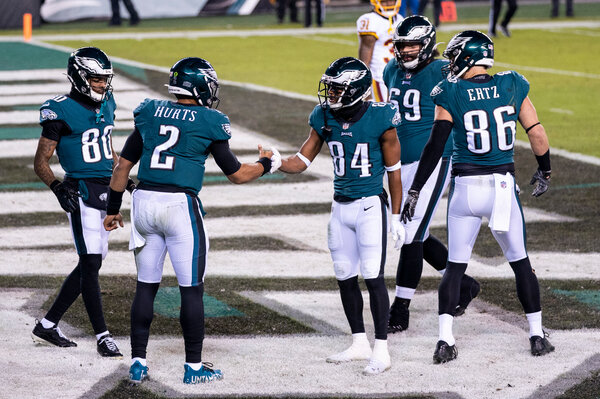 What’s been the hardest aspect of the salary cap being cut by 8 percent, particularly when you have so little cap space on your roster?

This is the first year that I can remember that we were really forced to be more conservative in terms of opportunities. We are balancing that with the knowledge that we have a lot of draft picks going forward that will allow us to get a lot of young players onto the roster.

We’re not looking at this like, you know, let’s see how long that we can struggle. We’re looking to turn this around as quickly as possible, and we feel like we’ve done that. You talked about the transition from Coach [Andy] Reid and Coach [Chip] Kelly came in, and we won 20 games the next two years. Coach Pederson came, we won seven and then we won 35 the next three years. And so that’s our goal, and accumulating assets is a way to make us better quicker — it’s not to sit here and just see how long it takes to get back on top.

Some reports have described dysfunctional communication in the team’s front office last year. Are those descriptions fair?

Last year with the pandemic was a unique year in terms of communication for everyone. But at the same time, if we didn’t have a team that worked together, then we wouldn’t have had the success that we had in the past when we dealt with adversity, whether it was coming back in 2016, getting a whole new group and winning a championship in our second year, or in 2018 and 2019, with the starts we had, finishing strong one year and making a strong run in the playoffs and the other year winning the division.