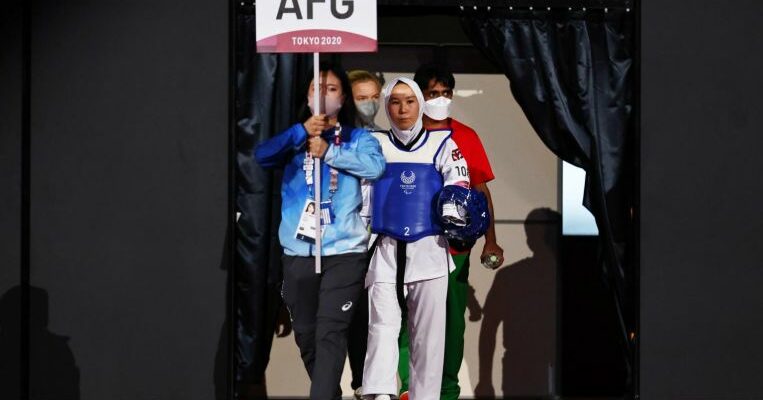 TOKYO (AFP) – With legs whirling and feet flying, taekwondo made its Paralympic debut at the Tokyo Games on Thursday (Sept 2) – and some claim it offers more thrills and spills than its Olympic counterpart.

The Paralympic version of the Korean martial art – in which fighters attempt to land blows on each other on an octagonal mat – bans kicks to the head and offers no points for punches.

But Brazilian fighter Nathan Cesar Sodario Torquato believes that makes the para version all the more exciting, describing the action as “frenetic”.

“You’re not allowed to kick in the head, so you don’t need to be afraid to be very aggressive,” said the 20-year-old, who booked his place in the men’s K44 -61kg semi-finals in the morning.

In taekwondo – the first full-contact sport in Paralympic history – points are awarded for landing kicks on an opponent’s padded upper body.

A simple kick to the trunk scores two points, while a turning kick is worth three and a more spectacular spinning kick four.

Kicks to the head are strictly forbidden, and result in disqualification.

The first bout of the day pitted Afghanistan’s Zakia Khudadadi, who arrived in Tokyo via Paris following a dramatic evacuation from Kabul, against Uzbekistan’s Ziyodakhon Isakova.

The 22-year-old looked stoic as she emerged from behind a curtain, AC/DC’s “Thunderstruck” blaring out of speakers around the arena.

She won the first round 6-5, but fell behind in the second round and eventually lost the match 17-12.

World Taekwondo (WT) president Choue Chung-won told AFP that her appearance in Tokyo proved how much the sport had grown.

“We started to organise the world para taekwondo championships in 2009 – the first one had not many athletes participating, less than 12 countries,” he said.

“This time, we have 37 countries and 73 athletes. We’re excited to see the diversity of para taekwondo in many countries.”

Among the athletes competing was Parfait Hakizimana, a member of the Refugee Paralympic Team.

The 33-year-old fled violence in his native Burundi in 2015, and now lives in a refugee camp in Rwanda, where he has set up a taekwondo club and trained more than 1,000 fellow refugees.

“Taekwondo helps people to love each other,” said Hakizimana, who was forced to withdraw from the repechage round with an injury.

“I think the Paralympic Games help a lot of people around the world, including refugees. I’m thankful to all the people who have helped us to take part.”

The early action saw shock exits for the favourites in both the men’s and women’s competitions.

“I always think the most important part is the head. If your head is right, you can do well in every competition,” said Bossolo.

Paralympic taekwondo’s first-ever medals are set to be decided in the evening session, and WT head Choue believes the sport can go from strength to strength.

“It’s more active than normal taekwondo, especially the spinning kicks and those kind of skilful kicks,” he said.

“It’s good for the development of para taekwondo.”