This year’s Super Netball season attracted an overall increase in viewership of seven per cent compared to last season – but the audience for the grand final was down sharply on last year’s figure.

The league released its viewership figures on Tuesday, a week after the NSW Swifts lifted the premiership trophy after beating the Giants 63-59 in the decider. 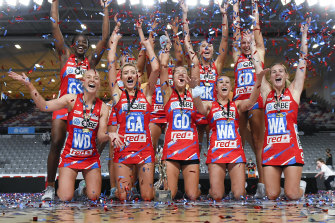 The Swifts celebrate their grand final victory over the Giants.Credit:Getty Images

The dip is being partially attributed to a clash with the AFL semi-final featuring the partner clubs of the Swifts and Giants, the Sydney Swans and GWS Giants.

Despite the grand final dip, some six million viewers tuned in throughout the season, up from just over five million last year.

The seven per cent across the five metro markets of Sydney, Melbourne, Brisbane, Adelaide and Perth is being attributed to the lockdown factor, with a 22 per cent growth in viewers in Sydney and Brisbane alone.

Netball Australia chief executive Kelly Ryan said the viewership rise was a great reward following a difficult season. In June, the Giants and Swifts were forced to move states four times within a month to keep the competition alive.

“A 22 per cent increase in viewers in Sydney and Brisbane is outstanding and we are excited by the growth of our competition, which continues to go from strength to strength,” Ryan said.

“We thank them for their hard work and commitment to growing the Suncorp Super Netball League and making it more accessible to fans across the country and the world.”

The league will enter a new five-year broadcast agreement with the Foxtel Group from next year.

Meanwhile, the West Coast Fever have appointed a replacement for Diamonds coach Stacey Marinkovich after she resigned from the role this year to focus on her national duties.

She will be replaced by international coach and former Australian men’s captain Dan Ryan.

Ryan coached Super Netball’s Adelaide Thunderbirds across 2017 and 2018 before coaching in the UK.

“I’ve grown a lot over the past three and a half years and have gained so much valuable experience overseas, so I feel really well prepared and confident it’s the right time and right place for me to thrive and reach my potential,” Ryan said.