LAS VEGAS — The cracks in Golden State’s foundation were small but noticeable.

Golden State is no longer penned in to reach the Finals for a sixth consecutive season. Just like teams in the East had been planning for LeBron James’ departure to the West last summer, teams in the West sensed a vulnerable moment in the power structure of the conference and acted accordingly.

With the late-night/early-morning news that Kawhi Leonard reached a deal with the Los Angeles Clippers and the Clippers acquired Paul George from Oklahoma City, the spotlight is on Los Angeles.

LeBron James, Anthony Davis and the Lakers vs. Leonard, George and the Clippers in a made-for-Hollywood rivalry. Big stars and big egos will clash.

It’s always been a rivalry waiting to happen, and it never quite reached what it could become even when the Clippers have had playoff teams in recent seasons while the Lakers struggled.

Clippers relevance is at an all-time high with this Leonard-George coup. This rise coincides with Steve Ballmer purchasing the team and finding the right front-office combination with president of basketball operations Lawrence Frank and NBA legend Jerry West – the former Lakers great on the court and an exec. There’s special irony in West torching his former franchise on this Leonard deal.

Leonard's decision to sign with the Clippers forced the Lakers to fill out their roster with better depth – including DeMarcus Cousins. Leonard would've made the Lakers more talented at the top, but now, they are a more well-rounded team, which should have its season-long benefits.

This show extends beyond L.A., as hard as it will be for Los Angeles NBA fans to believe. 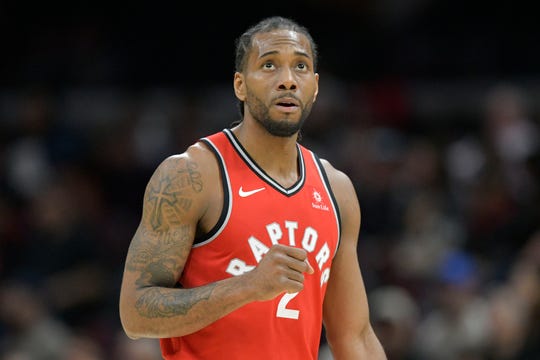 The Portland Trail Blazers reached the conference finals and are working to put together a better team around Damian Lillard – who agreed to a four-year, $196 million extension – and C.J. McCollum than they had last season.

The Denver Nuggets had the second-best record in the West last season and bring back a talented roster led by Nikola Jokic, Jamal Murray, Gary Harris and Paul Millsap.

Golden State lost Durant, and Thompson will miss a significant portion of next season, but don’t discount the Warriors. That is not an organization content with mediocrity and it has the money and front-office expertise to get back to the top with a core of Thompson, Steph Curry and Draymond Green and whatever they can turn D’Angelo Russell into.

The West is loaded and stacked, led by star power in Los Angeles.

Significant player movement, including multiple All-Stars, in free agency, and star players forcing partnerships have created this tumult. The reverberations will impact the league for at least the next four seasons.

Because it’s the NBA – this league – it would be foolish to think there won’t be more major moves that continue to reshape the future.

At some point – perhaps by the February trade deadline – the rebuilding Cleveland Cavaliers may look to move Kevin Love. If the Oklahoma City Thunder do a full reset, Russell Westbrook could become available. The same goes for Bradley Beal with the Washington Wizards. There may come a point when Raptors president of basketball operations Masai Ujiri decides to retool on the fly and Kyle Lowry, Serge Ibaka and Marc Gasol become available in trades.

Free agency may be winding down. But more moves will happen. It’s the nature of today’s NBA.