The company responsible for ball-tracking technology in Australia has extended an open invite to Tim Paine and his frustrated teammates to review the reviews.

India put the decision review system (DRS) to good use in the first Test at Adelaide Oval, where they recorded a dramatic 31-run victory over Australia. 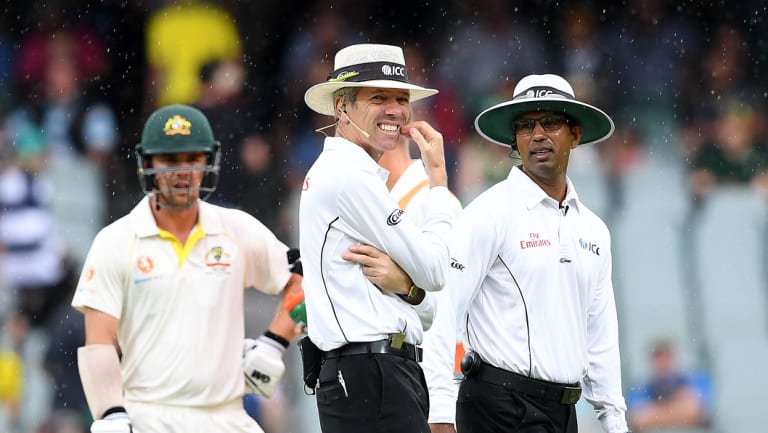 Virtual Eye boss Ian Taylor says he would like umpires to be specially trained in the DRS technology and third umpires allowed to overrule it.Credit:AAP

Nathan Lyon became just the second bowler in history to have three wickets overturned in a single Test innings.

The most grating for Australia was an lbw dismissal, when Cheteshwar Pujara was on 17 and ball-tracker suggested the Kookaburra would have bounced over the top of the stumps.

Lyon shook his head in disbelief. Pujara went on to score 71 and was named man of the match.

Lyon and Paine both admitted it was "frustrating," with the latter suggesting "a lot of balls seem to be going over the top … that live don't look like they are".

"Our door is open to any player, any captain, any official," Virtual Eye chief executive Ian Taylor said.

"Any issues they have, they are more than welcome to come down and they'll see views of it that you don't see on the big screen.

"We welcome the players. They just have to give us a call and our guys will show them everything.

"There will be times when it's bloody marginal. We might be proven wrong but we're not trying to hide anything."

Taylor wished the International Cricket Council (ICC) provided international umpires training in how the various technological tools function and that third umpires had the power to overrule a tight ball-tracking verdict.

The New Zealand entrepreneur suggested a slow-motion replay, from side of the wicket, helped convince a skeptical Shane Warne that the contentious Pujara verdict was correct.

"Even Shane Warne said 'that's a bit iffy, that would have taken the top' … then he took a look at the side-on angle and said 'I got that wrong, that's going over the top,'" Taylor said.

"We've got new slow-motion side-on cameras that Fox have brought in, they gave you a clearer indication."

Virtual Eye was initially designed purely to be part of TV coverage before the ICC decided it could help remove howlers from the sport.

But the responsibility for providing DRS services remains the domain of host broadcasters and firms like Virtual Eye and Hawk Eye.

Doubts about the accuracy of ball-tracking technology was partly why India refused to use DRS for eight years after it was rolled out by the ICC in 2008.

"I was always supportive of some of the concerns India had," Taylor said.

"I've always been a big fan of the third umpire having the power to overrule us … and I'd love if we had specially trained umpires who totally understood the technology."