WALNUT, Calif. — DK Metcalf launched slowly from the starting blocks, faded over 100 meters and learned in 10.363 seconds on Sunday that elite football speed does not translate easily to elite track speed.

An All-Pro receiver for the Seattle Seahawks, Metcalf is impressively fast for a football player. He delivered one of the most memorable plays of the last N.F.L. season, exceeding 22 miles an hour while wearing his helmet and pads to chase down an Arizona defensive back who intercepted a pass.

But in what he said was his first 100-meter race, Metcalf finished last in his preliminary heat against second-tier professional sprinters and did not qualify for the final at the Golden Games, a tuneup for next month’s United States Olympic track and field trials.

“These are world class athletes; they do this for a living,” Metcalf said after finishing 15th out of 17 competitors in two preliminary heats in cool, overcast conditions. “It’s very different from football speed, from what I just realized.”

Still, he challenged himself against top athletes from another sport after only two or three months of sprint training and did not embarrass himself. And he did finish ahead of two competitors in the preliminary heats. Cravon Gillespie won the final in 9.96 seconds.

Why do this? Metcalf was asked. “Why not?” he replied.

None of the four best American 100-meter runners participated in the race in a stadium without fans because of pandemic-related restrictions. It hardly mattered. Metcalf’s time was notable for an N.F.L. receiver but not for an elite sprinter. It did not rank among the fastest 20,000 performances ever in the 100 meters, according to an all-time list compiled by World Athletics, the sport’s governing body.

There remains a vast gulf between football speed and world-class sprint speed. Compared to Usain Bolt’s world record of 9.58 seconds, Metcalf’s time was nearly eight-tenths of a second slower, which might as well be an hour in an event often decided by hundredths of a second. 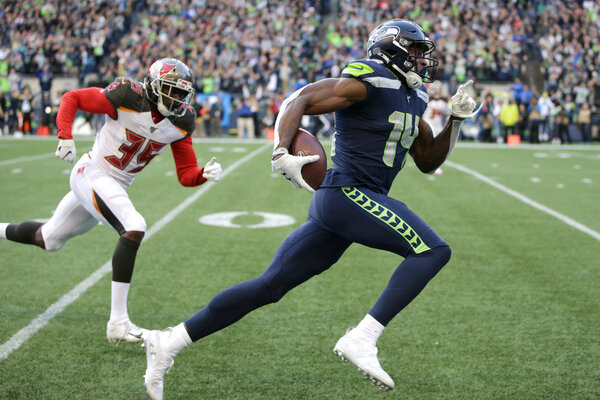 Nor did Metcalf challenge the national high school record of 10.00 seconds, often considered the threshold for world-class speed. Most importantly, he did not reach his goal of 10.05 seconds, the time needed to gain automatic entry into the Olympic trials in Eugene, Ore.

Other competitors welcomed Metcalf to the meet held at Mt. San Antonio College. For his football celebrity, which drew interest to a sport that gains little attention apart from the Olympics. For his willingness to compete against professional sprinters. And for the lesson delivered that running 100 meters is a far more technical endeavor than simply running as fast as you can from the start line to the finish line.

“Fans have been egging this on for a long time, that our speeds are comparable; they’re not,” said Noah Lyles, who could potentially win the 100 meters (personal best 9.86 seconds) and 200 meters at the rescheduled Tokyo Olympics in July and August.

Sure, there have been some extremely fast football players. Most notably, Bob Hayes, a Hall of Fame receiver for the Dallas Cowboys, won the 100 meters at the 1964 Tokyo Olympics. But most football players “don’t have any clue” about elite sprinting, said Mike Rodgers, a 2016 Olympian and a gold medalist on the United States 4×100-meter relay team at the 2019 world track and field championships.

Football players seldom run the length of the field in a straight line. And their 40-yard dash times — Metcalf ran that distance in 4.33 seconds at the 2019 N.F.L. combine for prospective players — are widely discounted in track circles. There is no reaction to a starting gun to precisely gauge speed. At a fan exhibit at the 2019 Super Bowl, the retired Bolt casually matched the N.F.L. combine record of 4.22 seconds while running in sweats and sneakers.

Metcalf, who is 6-feet-4 inches and weighs 229 pounds, was a superb hurdler in high school, but did not run track at the University of Mississippi. His lack of formal training at 100 meters was evident on Sunday.

“There is as much strategy running 100 meters as running a marathon,” Lyles said.

No one can accelerate for a full 100 meters. Speed must be distributed strategically. The mechanics of the event require a low, explosive start from the blocks. Sprinters must avoid popping up too quickly and losing momentum or braking by striking the ground too far in front of their bodies.

Then comes the acceleration phase. Speed is a function of the length and frequency of strides. Top speed is reached at about 60, 70 or 80 meters. The challenge becomes trying to hold as much speed as possible while decelerating to the finish line.

The outcome of a 100-meter race is essentially an optical illusion. The winner is not speeding up the fastest but slowing down the slowest.

“You can only for five or six seconds produce maximum contraction” of the muscles, said Olivier Girard, an exercise physiologist who studies sprinting at the University of Western Australia. “After that, the energy-producing system is not as efficient. That’s why we cannot maintain the top speed and have to slow down.”

Asked if he would run another 100, Metcalf demurred. When someone else asked what was next for him, he smiled and said, “Football. It’s time for minicamp.”