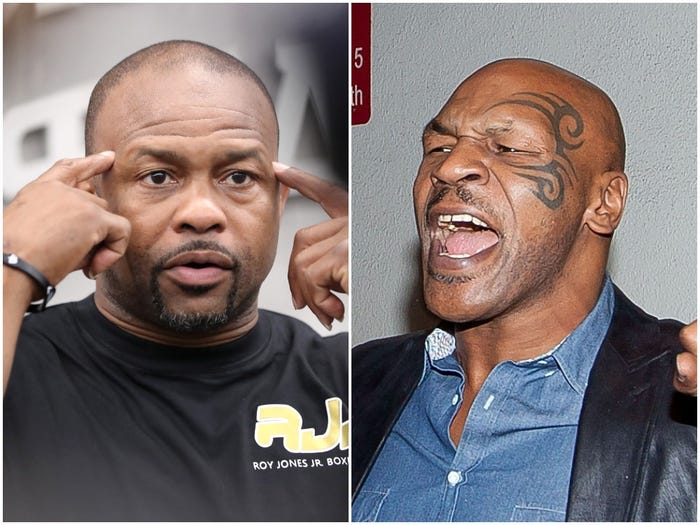 One of Britain's top promoters said Mike Tyson vs. Roy Jones Jr.'s upcoming exhibition is "sad" because "boxing is a young man's game."

The two former heavyweight world champions return to the ring November 28 at the Staples Center in Los Angeles for an unofficial eight-round match which will not count on either athlete's professional boxing record.

The charity match has caught the attention of fight fans as it brings together Tyson, the "baddest man on the planet" from the late 1980s, with the most athletic and stylish boxer from the decade after, albeit fighting in 2020 when they are both in their 50s.

Frank Warren, who represents the fast-rising British heavyweight Daniel Dubois, told The Gary Newbon Sports Show on Punching.TV that he "has no interest in it."

Warren added: "By interest, I mean I don't like the idea of guys that age fighting. I know it's going to be a so-called exhibition match but I have no interest.

"They're obviously doing it for money and I think it's quite sad they're doing what they're doing. They should not be doing it, boxing is a young man's game."

Tyson, 54, and Jones, 51, said during a recent virtual press conference Insider attended that they were both annoyed they were fighting two-minute rounds rather than the traditional three which they would have competed in during their respective primes.

"The women fight for two minutes," Tyson said, adding: "But it's not about me, there's a charity [element] … I'm just happy we're doing it."

Jones added: "I'm not happy at all … like he said, that's for women. I kept fighting until the last minute, saying, 'Why we fighting two-minute rounds?' I don't understand that. We're not women. We're two of the best to ever do it."