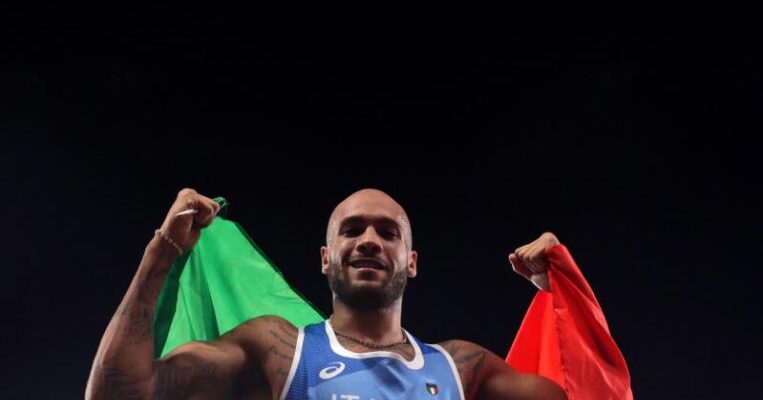 TOKYO – If there was one thing Usain Bolt gave the world that was perhaps under-appreciated, it was surety.

The Jamaican’s reign of dominance on the track saw him end up with gold hanging from his neck after each of the eight sprint finals across three Olympic Games before he retired in 2017.

Who could have foreseen the winner of the 100m race being the Texas-born son of an American father and Italian mother, and whose instagram handle is crazylongjumper?

Representing his mother’s native country, Lamont Marcell Jacobs became a worldwide sensation in 9.80 seconds after he blazed across the finish line on a balmy evening at the Tokyo Olympic Stadium to become the new sprint king of the Games.

The shaven-headed, heavily tattooed 26-year-old finished ahead of Fred Kerley of the United States (9.86 sec) and Canada’s Andre de Grasse (9.90 sec), who had to settle for his second Olympic bronze after Rio de Janeiro five years ago.

Jacobs had the second-slowest reaction time in the final but the power in his 1.88m frame carried him through the field to etch his name in history.

His win was the first for Italy in the century sprint at the Olympics and the first time a sprinter from Europe has won the event since Alan Wells in Moscow in 1980, which was boycotted by the United States. That year, Pietro Mannea also won Italy’s last sprint gold, in the men’s 200m.

Italian was almost exclusively the language heard at the press conference room last night and Jacobs, who was relieved he was allowed to answer in his mother tongue, said: “My dream was to win an Olympic gold medal, and a few years ago the goal was to win in the long jump.

“Then I had a few (injuries) and I thought, ‘Ok, maybe that is going to be hard to do in the long jump’.

“But I never gave up on my dreams.”

It might have been fanciful to think a late switch to sprints would yield success in the Olympics’ blue riband event, but it was only in keeping with the theme last night, where surprises were aplenty.

There was shock, then sympathy for the Floridian, who overcame a catalogue of injuries to post the world’s fastest time this year (9.77 sec) only to end his chase for individual gold with his head in his hands.

Perhaps Bolt did not realise that not everyone is able to deal with expectation like him.

Pity for Bromell, though, soon made way for astonishment in the next semi-final as China’s Su Bingtian became the first Asian man to reach the 100m final at the Olympics for 89 years after scorching to an Asian record of 9.83sec.

His brilliant run was the joint-13th best time in history and made him the quickest qualifier for the final, raising hopes of a first Asian medal in the event.

But he was spent by the final and was the slowest off the blocks, finishing last in 9.98 sec. It was also the first time in Olympic history that all competitors had clocked a sub-10sec time in a race.

Su, 31, said he had given his all in the semi-final because “I cannot hold back and still make the final”.

He said: “Nobody can take it easy after 90 metres like Usain Bolt did.

“It is a level playing field now, nobody can be complacent.”

That much was illustrated by Jacobs’ emergence. In a race that could have been won by anyone that stood on the starting line, the Italian ran the race of his life.

On being Bolt’s successor, he said: “I’m here today where he was before. It’s incredible.

“But drawing comparisons? I don’t think that’s the time yet. Let’s see how the future pans out.”