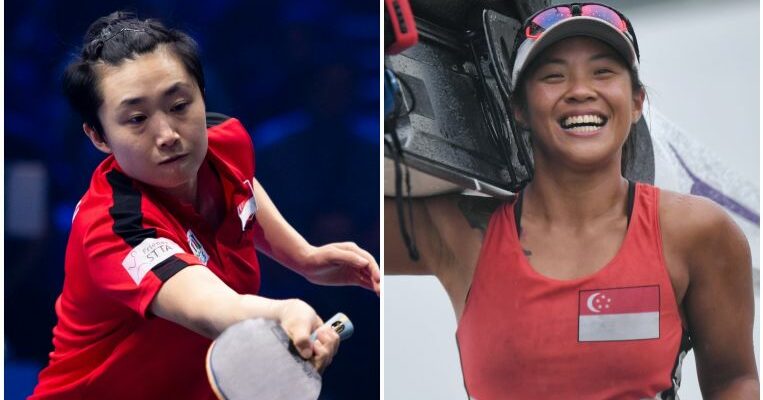 SINGAPORE – Athletes are always engaged in a special tango with time. Invariably, the sports they compete in are all about beating the clock, or performing a specific task with immaculate timing.

And the quadrennial Olympic Games are a celebration of how years of hard work are distilled into a timely execution that qualifies them for a place among the global elite.

Since Lloyd Valberg became Singapore’s first Olympian at London 1948, slightly more than 200 of his countrymen have followed his footsteps in the last 73 years.

These include at least five who were selected for China’s athletics, basketball and football teams at London 1948 and 22 who wore Malaysian colours at Tokyo 1964 before Singapore became independent a year later.

In between, weightlifter Tan Howe Liang won the nation’s first Olympic medal – a silver at Rome 1960 – as the Republic began its rise from Third World to first, and later on made considerable investment to build top-class sporting infrastructure and expertise.

The times have changed, literally and figuratively, and so it is with the Olympics.

Tokyo 2020 will be the first gender-balanced Games with female athletes making up 49 per cent of competitors, but due to Covid-19, it will open in 2021, as the Olympics are held in an odd-numbered year for the first time.

The calendar is not the only thing the coronavirus pandemic has thrown into disarray in the world of sport.

The 12-month postponement gives sportsmen 364 days more to prepare, but an extra 8,736 hours to ponder and reschedule.

Ahead of previous major Games, athletes are used to meeting milestones, scheduling training camps, and checking their gear and equipment.

They sometimes worry about food poisoning or catching the flu bug.

But for Tokyo 2020, even the stressful conditions they are familiar with will be distinctly different.

Based in Osaka for the past year, table tennis player Feng Tianwei has been waking up every morning fearing the worst. As a foreigner, she was not able to receive the Covid-19 vaccination in Japan until late last month.

The 34-year-old is already Singapore’s most bemedalled Olympian with one silver and two bronzes, but still she trudges on, defying age and niggling injuries. Feng doesn’t just want to co-own the national record of four Olympic appearances with Joscelin Yeo and Li Jiawei, she wants another medal in possibly her final hurrah.

Rower Joan Poh, a nurse, had to extend her no-pay leave to pursue Olympic qualification, which was achieved less than 100 days before the July 23 opening ceremony.

Windsurfer Amanda Ng, whose day job is an audit associate, is in the same boat, and saw her flight date and training camp destination change from “Sunday, Hong Kong” to “Thursday, Weymouth”.

There are more upheavals they have to take in their stride.

To prevent the spread of Covid-19, the International Olympic Committee is barring participants from entering the melting pot that is the Olympic Village more than five days before their first event. They are required to follow a strict itinerary and leave Japan within two days of their final competition.

Athletes also face scrutiny from groups who think it is wrong to have a sporting event that involves 80,000 visitors flying into a country which has not had the pandemic under control.

As their Olympic date draws near, they can only do their part to follow safe management measures and pray for an explosion of sporting talent but not another Covid-19 outbreak.

In this past year, some athletes have become quicker and better, while others have slowed down and deteriorated. A few have recovered, a handful have retired.

Not everyone will make the podium. Barring ties, there are just 1,017 medals on offer, and most of the 11,000 athletes will be content to complete their events in sport’s promised land.

Ng is one of those who will haul her battered body across the finish line.

Suffering a Grade 2 medial collateral ligament tear just before securing qualification in April, it was too late to go for surgery and make a comeback, so she will dance not just with the wind and waves, but also time, on a stiff left knee.

There will be miracles and fairy tales, and near-misses.

The paddlers finally broke a 48-year medal drought at Beijing 2008 when Wang Yuegu, Li and Feng edged past South Korea in the semi-finals en route to a women’s team silver. The trio went on to claim a women’s team bronze, with Feng adding a women’s singles bronze, at London 2012.

And now, Singapore will finally enter the quadrennial event with an Olympic champion.

In 50.39 seconds, Joseph Schooling won the 100m butterfly final, waltzed into the national, Asian, Commonwealth and Olympic record books, and wrote a timeless tale at Rio 2016, as he rallied a nation glued to their TV sets 15,000km away.

But after realising a lifelong dream, the swimmer has been candid about his quest to rediscover his love for the sport, how his body has changed with age, and how the extra time helped him regain his form.

Meanwhile, Team Singapore have also made significant progress in their Olympic journey since London 1948.

This year, they will have their most diverse group with 23 representatives from 12 sports as Jonathan Chan and Freida Lim take an unprecedented big leap for Singapore diving, while Amita Berthier and Kiria Tikanah Abdul Rahman are the country’s first Olympic fencing qualifiers.

Wearing a saddle adorned with five stars and a crescent moon, there will even be a historic horse which Caroline Chew will lead out when she becomes the Republic’s first Olympic equestrian as she takes on a mixed-gender field.

Like 74 per cent of all Summer Olympians, this will be a once-in-a-lifetime experience for many. Athletics universality place holder Shanti Pereira will relish the 20-odd seconds in her 200m race, while marathon swimmer Chantal Liew, who is retiring after Tokyo 2020 to pursue a Masters in human-computer interaction, will cherish the two-plus hours in her 10km slog.

But whether they depend on fast-twitch muscles like Schooling, rely on more drawn-out patience like shooter Adele Tan, or even count on a friendly gelding named Tribiani like Chew, now is the time for this unique tribe to take flight.